Another trip to the Book Trader and another haul of used books, because, hey, I’d rather have 10 books I know I’ll read than 20 books I know I won’t read. Sully read all the books already and is exhausted. 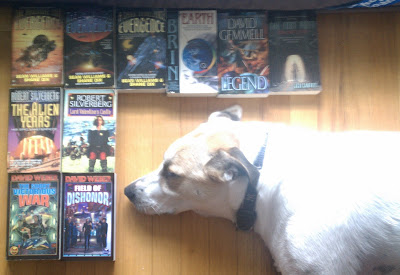 Here’s the rundown, from top to bottom:

The Evergence Trilogy (The Prodigal Son, The Dying Light , and The Dark Imbalance ) by Sean Williams and Shane Dix – I enjoyed the Geodesica duology by the same author team, LOVED what Sean Williams did by himself in Books of the Cataclysm and sort of enjoyed Astropolis. I’d wanted to read this trilogy for a while, but it’s been out of print for a while so I was happy to find the whole trilogy used since more often than not at these used books stores when I want to buy a series, at least one book of sequence is missing.

Earth by David Brin – The only book I’ve read by Brin is The Postman and this book is one that’s been on my radar for quite some time.

Legend by David Gemmell – Geek admission – I’ve never read this book. I did read the first two novels in his Rigante sequence as well as Echoes of the Great Song plus I have a bunch of his older books I found in perfectly good condition in the trash area (the books were in bags and boxes and untouched by real garbage) in my old Townhouse years ago, but not this book.

The Lost Fleet: Dauntless by Jack Campbell – I received the 2 most recent novels in this sequence for review from the publisher, and based on Mark Chitty’s praise for the books, I do want to read them but figured the first book might be the best spot to start

The Alien Years and Lord Valentine’s Castle by Robert Silverberg – I’ve read a bunch of shorts and a couple of books by Silverbeg but have always wanted to read his stab at Epic Fantasy and since Lord Valentine’s Castle is out of print, I made sure to snatch this one. The Alien Years is a book on my radar since it first published and it was a main selection of the Science Fiction Book Club. Plus, the new (and terrific) show Falling Skies has put me in the mood for some good ol’ alien invasion entertainment.


Field of Dishonor and The Short Victorious War by David Weber– By now, readers of my blog should know I’ve become a big fan of Weber, these are the third and fourth book in his massively popular Honor Harrington sequence.

I haven't read anything by Sean Williams and Shane Dix yet, but I have both The Evergence Trilogy and Geodesica waiting on my shelf.

I really like the Lost Fleet series as a whole. Dauntless was very good, but since each book is basically a small part of the complete story you'll definitely want to get the rest.