Some new content up at SFFWorld over the past week, one review and one interview. Let's begin with my review, shall we? The book's been sitting on my to-read pile for over a year, but I finally read it. The book? Terminal World by Alastair Reynolds, which will also be SFFWorld's Science Fiction Book Club selection in July (2011). After the cover shot, the usual review excerpt 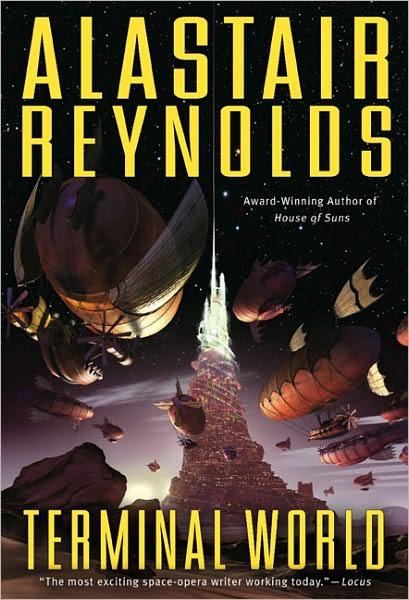 Spearpoint is a city-world separated by zones, wherein each zone is the equivalent of its own country and even its own atmosphere, technology, and power sources. The divide between zones is so marked that denizens of one zone have difficulty surviving unaided in other zones for long periods of time. Spearpoint itself is a powerful blending of storytelling and world-building, a characteristic Reynolds has demonstrated in previous novels and perhaps most strongly here in Terminal World. Throughout Quillion and Meroka’s journey, they encounter the denizens of each zone from Skullboys to Vorgs to all sorts of post-human creatures. In some respects, Reynolds could probably pen a short-novel centered on each zone of Spearpont.

The interview, conducted by SFFWorld's KatG is with, Jon Sprunk, author of Shadow's Son and Shadow's Lure.
at 6/28/2011