The Kings of Eternity by Eric Brown

Just one review this week at SFFWorld, but that's fine since the book is so amazing, it isn't such a bad thing to highlight this one book alone. Eric Brown's The Kings of Eternity is one of the highlights of the 2011 SF releases, in my opinion. The novel is , a book he's been working on the better part of the last decade. My only other reading experience with Mr. Brown is the severely under-rated, in my opinion, Helix. Well, after reading The Kings of Eternity, and remembering how much I enjoyed Helix, Mr. Brown is now on my "get all his stuff and read it" list.

Anyway, as usual here's the cover of the book (and what a knock out cover it is by Dominic Harman) and the review excerpt: 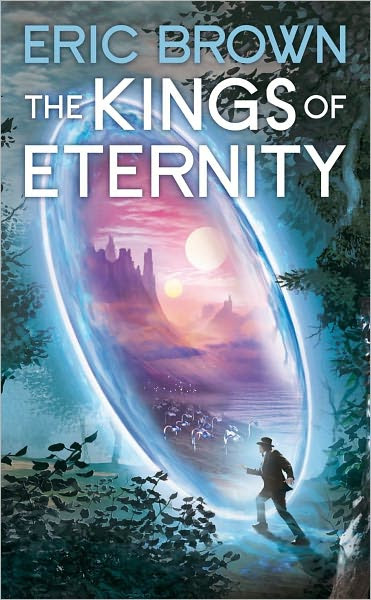 The Kings of Eternity, the subject of this review, is a book he worked on for a decade and can be seen as two stories in one. In it, Brown takes a very writerly trope and chooses as his protagonists two writers who are separated by the gulf of about 64 years. Of course, going into the novel with that premise, it might be considered a foregone conclusion the two storylines will eventually converge. However; the manner in which Brown makes the twain meet makes for a wonderful journey.

The Kings of Eternity is the type of SF novel that should appeal to many readers. It has enough science fiction-y goodness for seasoned readers; conversely, it doesn’t thrust the reader into these elements unawares at the beginning of the story, thus lulling the reader into those elements; and perhaps most importantly: fully-rounded and believable characters. Though I didn’t completely like Jonathon all the time while I was reading, he felt real and I could empathize with him. The same goes for Daniel, though I did enjoy his company more. Brown, like I’ve said in a number of my reviews of other writers, allows the world and events to unfold through his characters. As I implied, this is all the more enjoyable since those characters are so alive and believable.