Hexed in City with Hearne and Simak

Two reviews this week at SFFWorld, one from me and one from Hobbit/Mark Yon.

In Hexed, Hearne further fleshes out the supporting cast introduced in Hounded, including Atticus’s new Druid-in-training Granuaile MacTiernan; his elderly neighbor Mrs. MacDonagh; the vampire and werewolf attorneys, and of course Oberon the Irish Wolfhound. Hearne does a great balancing act between moving the plot along briskly while also fleshing out those characters, introducing further complications into Atticus’s life, and keeping a cohesive and logical link of consequences to the actions previous volume. As I indicated in my review of Hounded, I adored the relationship between Oberon and Atticus and more backstory is provided between man and canine, as well as the continuing doses of humor and emotion.

The Iron Druid Chronicles is turning into a truly entertaining series with the first two volumes, one of my reading highlights of 2011. Hammered, the third volume, is (thus far) the final installment slated to be published, but I’m really hoping to see more of Atticus in Oberon in the future.

Mark is continuing his trek through the classics of SF with Clifford Simak’s saga City: 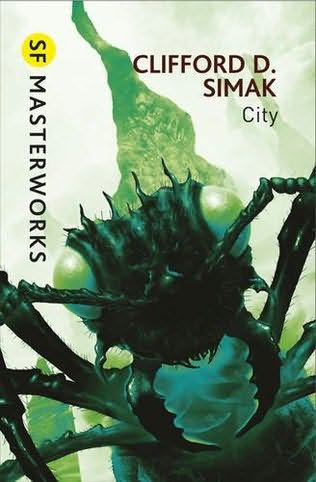 Clifford/Cliff Simak is an author I first came to when I was a teenager in the late 1970’s and early 1980’s. At first I wasn’t sure – it wasn’t spaceships and action, but instead a much more subtle and gentle SF. (Mark Charan Newton has since referred to it as ‘rural SF’, which sorta works.) Instead of Star Wars bang-whizz action, we have pastoral introspection, Waltons-style homily and self-depreciating humour.
And in City in particular we have robots, ants and dogs.

Simply, it is a set of eight interconnected stories (or in some cases, nine, with an extra tale, Epilog, written in 1973 and added in the 1980’s. Here it is not included, sadly).