All Hallows Read is in full effect so I’ll throw out some recommendations for 2011 (and all future Hallowe’ens):

What says Hallowe’en like a giant tentacle cosmic horror lurking deep beneath the sea? I am, of course, talking about Cthulhu and two recently published books fit the bill perfectly. Let’s start with Good ol’ H.P. Lovecraft himself. The Call of Cthulhu and Other Weird Stories by H.P. Lovecraft recently published in a beautiful classy edition from Penguin Classics. This one has some of the master’s greatest, including the titular Call of Cthulhu and includes introductions and edits by S.T. Joshi, the authority on all things Lovecraft. I reread the story and the creeping, lurking sense of horror is present throughout the story. Also included is Dagon, one of Lovecraft’s earliest tales, and a short one tying into the Cthulhu mythos. Also included, among others, are the following: The Rats in the Walls, The Colour out of Space, The Picture in the House, and perhaps one of my favorites, The Shadow Over Innsmouth with its links to Cthulhu and town of fish folk. The thing with Lovecraft’s stories is that many collections overlap with each other. For example, this volume has a fair amount of overlap with the excellent Science Fiction Book Club collection edited by Andrew Wheeler, Black Seas of Infinity. One of the two major tales that don’t overlap is At the Mountains of Madness, one of Lovecraft’s longer tales which appears in Wheeler’s volume. The major tale in the Penguin volume not in Wheeler’s selection is Herbert West—Reanimator, which is good, but because it appeared in installments rather than one single installment, tends to be a bit repetitive at the beginning of each passage. I can’t recommend either volume highly enough, but since the Penguin edition just published and is more widely available, that might be the easier book to buy. Really though, you can’t go wrong with either. 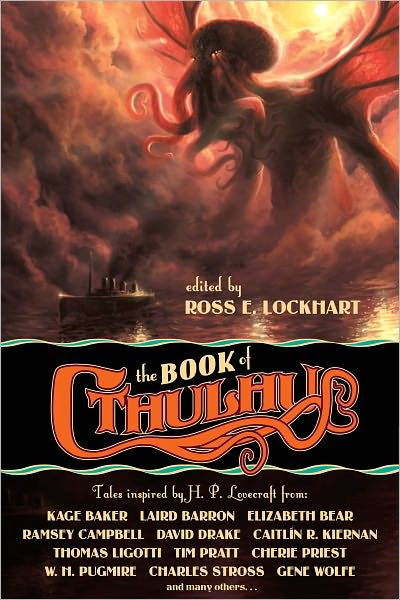 Another timely volume is The Book of Cthulhu edited by Ross E. Lockhart (Nightshade Books I’ve been dipping my toes into this one over the course of the month and I am very impressed. The book itself is quite attractive and follows the impressive line of themed anthologies at NightShade edited by John Joseph Adams. Lockhart cast his net very wide in bringing in stories ranging in source from Cthulhu themed anthologies from the 1970s to stories appearing in this anthology for the first time. Highlights include the moody and creepy Caitlin R. Kiernan’s Andromeda among the Stones where curiosity becomes an obsession to a fault and a good choice for an opening story. Dreams and the uncertainty of the Cosmos play a strong role in Ramsey Campbell’s The Tugging. I liked A Colder War Charles Stross quite a bit, too. Plays with communism, the Cold War (obviously) and links to ancient cults and religions. Kage Baker’s Calamari Curls plays with perhaps, voodoo connections to the Cthulhu mythos. All told, I haven’t read the whole anthology yet, but I like much of what I’ve read. I’m looking forward to getting through Tim Pratt’s story, based on how much I’ve enjoyed his Marla Mason stories which may (or may not) have ties to a certain cult.

I’ll finish out today’s post with a few links to past books I’ve highlighted at Hallowe’en and a short review of a what I think is a taut, solid ghost story.


No Doors, No Windows by Joe Schreiber 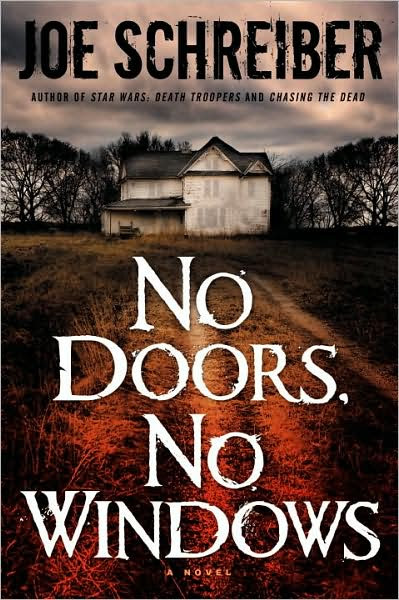 Small town secrets, an eerie house, and an unfinished manuscript form some of the support structures in Joe Schreiber’s haunted house novel No Doors, No Windows. It is also a story about a writer, Scott Mast who returns to his hometown in New Hampshire to attend his father’s funeral. Scott initially stays with his brother Owen, who is the lone parent of Henry, Scott’s nephew. Owen never recovered fully from the death of his and Scott’s mother a decade ago and has succumbed to alcoholism. This is only the tip of the iceberg’s darkness, because Scott, a writer himself, finds a manuscript revealing dark deeds, on which his father was working.

Scott returns to skeletons in the closet, people whom he left behind when he moved to Seattle and gave little consideration in the intervening years. These include an old girlfriend, a town-wide tragedy, the town’s most popular girl, and Round House – a dark house not far from where Scott’s father crashed his car and died.

On one level, No Doors, No Windows is very much a haunted house story. Scott soon finds himself spending a great deal of time in Round House trying to finish the creepy manuscript on which his father was working. He soon wonders if the dark events relayed in the unfinished manuscript actually occurred in Round House.

Some of the conventions in the novel are familiar – the darkness surrounding the ‘present’ of the novel is informed by events generations removed from the protagonist and a haunted writer struggling with his craft have been done on more than one occasion by Stephen King and recently to great effect by Caitlín R. Kiernan in The Red Tree. However, Schreiber terrifically takes the familiar elements and molds them into his own satisfying vision of darkness.

Schreiber’s style might be considered sparse and natural. Characters who have known each other don’t immediately unfold their histories when they come together; there are no paragraphs and/or pages of exposition. Characters simply act as themselves and speak without regard for the reader’s foreknowledge of these characters. In this respect, Schreiber paints a very realistic picture of how these people would interact.

No Doors, No Windows is a taut and emotional ghost story, the root of whose hauntings are revealed carefully and deftly. Schreiber has written a precise, solid and engaging novel that pulls no punches and is recommended.
at 10/31/2011