Two reviews this week, from the usual suspects – Mark Yon and myself. Mine is fairly timely with Hallowe’en ‘round the corner.

Way back in May I attended the annual book publishing conference, BEA. At the meeting I met one of the fine folks of Fantasy Flight Publishing and they were in the process of launching a fiction tie-in line for some of their popular games. I received a few of those books at the end of the summer and finally made my way to Ghouls of the Miskatonic the first book in The Dark Waters Trilogy by Graham McNeill:

The nugget that gets the plot rolling is the death of a young college student at Miskatonic University discovered by Amanda Sharpe and Rita Murphy. The body of the girl looks to be eaten and this, combined with Amanda’s disturbing dreams of a creepy underwater city has her unsettled through much of the early part of the novel. Mysterious death and missing persons in Arkham is not something new, but when Amanda goes missing shortly after finding the body, her mentor Anthropology Professor Oliver Grayson becomes more interested in the disappearances, the plot gets rolling. Events are spurred on further since this dead girl’s father is a Pinkerton Detective, who helps to move things at a greater pace when he and Arkham Advertiser reporter Rex Murphy and photographer Minnie Kline spot him looking over the scene where his daughter was murdered. What follows is a briskly paced story mixing elements of horror/dark fantasy (duh), noir/mystery, and thriller. Along the way, deeper secrets about the dark cult of Cthulhu, strange and grotesque creatures, and smoky speakeasies enhance the plot.

The characters come across as believable on most counts and Grayson in particular fits the Lovecraftian protagonist out-of-his sorts quite well. Some of the dialogue and banter between Rex Murphy and Minnie Kline seemed a bit hokey, for lack of a better word, what with the colloquialisms of the roaring twenties in full swing. There was obvious (if not to the characters themselves) romantic tension between Rex and Minnie that looks to be developing as an undercurrent to the greater theme of humanity as a speck of dust in the cosmos.

Mark takes a look at another one from his lingering pile, a fantasy novel that was published way back in 1999 by J.V. Jones, the first book in what is growing into one of the more acclaimed ongoing fantasy sagas, Sword of Shadows. The first book is A Cavern of Black Ice: 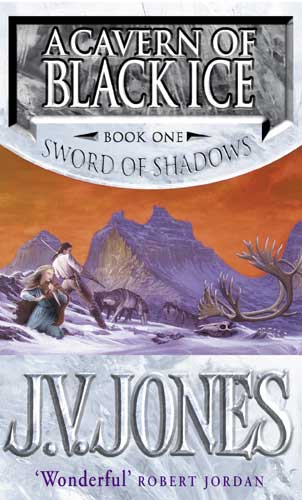 JV Jones’s series (now up to Book Four, Watcher of the Dead, with Book Five currently being written) is initially set in a sub-Arctic-type world, with a culture and a subsistence lifestyle which made me think a la Inuit. Raif Sevrance is a young clansman with a secret magic power (the ability to guide, with his mind, arrows to the heart of a living thing) whose father and clan group are mysteriously murdered whilst they are on a hunting trip. Raif and his brother Drey return to the remainder of the clan, to find that the dead clanleader’s foster child, Mace Blackhail, has not only taken over as tribe leader but also has stirred the tribe into war with the neighbouring Bludd clan, blamed for the massacre. Raif finds the new leader, violent, unpleasant and vindictive and also suspects Mace to be the cause for the slaughter, wanting to lead the clan into a takeover of the other clan groups.
…
BUT... after the initial concern that it was a typical quest novel, after a rather slow start this is quite a page turner. Whilst there was still too much Clan of the Cave Bears at first for me, once our hero and heroine meet in the city of Spire Vanis, it’s a fast paced and intense read. What really works here is the characterisation. In particular, in the characters of Ash and Raif, we see the growing up of two young people who cope with varying degrees of success in situations neither would want. It’s a brutal world. As the book goes on, wider aspects of this world are revealed in an interestingly written, rich history and background rather reminiscent of George RR Martin’s rich tapestry of A Song of Ice and Fire. We have a long history of different clans and quite different races, details of previous rulers and famous people which deepen our knowledge and understanding of Raif and Ash’s world.