Mark continues to be a reviewing machine with three new reviews, while I truck along on my weekly singular pace.


Mark has been looking at a lot of coffee table art books, the latest of which is Drew Struzan’s, Oeuvre :

After producing art for over thirty years, it is therefore perhaps right that we have a collection of Drew’s work – here, over 250 pieces of artwork, collecting together and celebrating the artist’s portfolio from the late 1970’s to now. This is the second volume of Drew’s art, a companion volume to The Art of Drew Struzan. The intention of Oeuvre is to cover the range of Drew’s work, rather than be a comprehensive collection of all his work.

The Introduction, written by Drew’s wife, gives history of Drew’s career and a little of the background as to how Drew came to be involved in some of his best known projects.

The book is then divided into five main sections: Music, Movies, Publishing, Commercial and Personal.

A book I looked at a while back, but didn’t fall into the queue until now is an omnibus (three novels-in-one volume) of the first four Afterblight novels, the shared world of post-apocalyptic fiction published by Abaddon books, Omnibus 1: America : 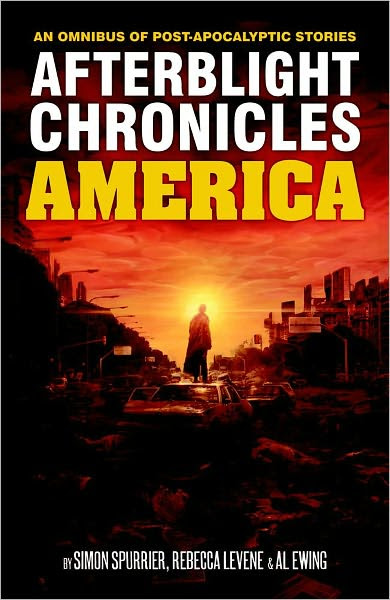 All three books show different aspects of the shattered world, though Ewing and Spurrier’s novels range somewhat closely together in their depictions of violence. I wasn’t sure what to expect when I opened the pages of the book – I’m a fan of post-apocalyptic fiction and have enjoyed a fair share of media tie-in fiction. What Abaddon’s doing; however, is a different brand of franchise – based more so on interesting ideas, the editors of Abaddon seem to give their authors more free rein in terms of exploring and charting the world, and being more inventive with the characters.

One thing that stood out to me is how well airplanes (The Culled) and sea-ships (Cure or Kill) still function and are used. More often than not in post-apocalyptic fiction, the characters journey across the devastated landscape on foot, or maybe cars and trucks (Death Got No Mercy). This isn’t to say that the large, mass transports aren’t entirely plausible, it just stood out to me as perhaps an indication that civilization isn’t quite so devastated.

Mark has also been doing a fair job of catching up with classic reissues, in this case the first of Phil Rickman’s popular Merrily Watkins mysteries, The Wine of Angels : Merrily Watkins is a single mother who, after the death of her husband, becomes ordained as a Vicar (or as they prefer these days, ‘a Priest-in-Charge’) . After working in the drug dens and crime zones of Liverpool, she is given the picturesque country parish of Ledwardine and a big rambling vicarage to take care of.

After that, things become decidedly creepier. The main apple tree in the village seems to be there for more than just producing apples and it appears to bear a grudge. The proposal of a play written by celebrated gay playwright Richard Coffey on a 17th century member of the church accused of witchcraft seems to bring nothing but trouble. A party by teenager Colette Cassidy leads to her going missing, possibly in the orchard where the apple tree resides.

As Merrily struggles to find her feet in the parish (and the conservative parishioners adjust to a woman priest) there is scandal, political shenanigans and a definite sense of unease. For there seems to be something going on in the vicarage and the Apple Tree Man seems to be on the rise.

Lastly, but not leastly of Mark’s reviews is a something of a genre mash-up combining a fictitious creation (Captain Nemo) with his creator (Jules Verne) in Kevin J. Anderson’s, Captain Nemo :

Titan Books are re-releasing this book, which takes both Jules Verne, the writer, and his fictional character Andre Nemo (of 20 000 Leagues Beneath the Sea, amongst others) and mixes them up.

We begin the tale with both boys attempting to stowaway to sea. Unfortunately Jules is caught by his father and made to return home. Andre does escape and before long he is doing all the things that have become famous in Verne’s writing. He is set upon by pirates, shipwrecked, takes revenge, has to face dinosaurs, travels into the Earth, balloons across Africa, discovers Timbuktu, and ends up in the British cavalry fighting the Russians. Whilst doing this, Nemo also encounters a number of key historical people and is involved in a number of key events (such as the Charge of the Light Brigade) before returning home to France. Jules, still in France and pining after Caroline Arronax, eventually turns these real life tales of his friend into his popular novels.