It's been a couple of months, so I might as well drop in the semi-regular disclaimer about these Books in the Mail posts:

Sometimes I get one or two books, other weeks I'll get nearly a dozen books. Some weeks, I’ll receive a finished (i.e. the version people see on bookshelves) copy of a book for which I received an ARC (Advance Reader Copy) weeks or months prior to the actual publication of the book. Sometimes I'll want to read everything that arrives, other weeks, the books immediately go into the "I'll never read this book" pile, while still others go into the nebulous "maybe-I'll-read-it-category." More often than not, it is a mix of books that appeal to me at different levels (i.e. from "this book holds ZERO appeal for me" to "I cannot WAIT to read this book yesterday").

Twenty-five years ago, the alien Givers came to Earth. They gave the human race the greatest technology ever seen— four giant towers known as Ladders that rise 36,000 miles into space and culminate in space stations that power the entire planet. Then, for reasons unknown, the Givers disappeared. Due to the unique alien construction of the Laddertop space stations, only a skilled crew of children can perform the maintenance necessary to keep the stations up and running.

Back on Earth, competition is fierce to enter Laddertop Academy. It is an honor few students will achieve. Robbi and Azure, two eleven-year-old girls who are the best of friends, are candidates for the Academy. They will become entangled in a dangerous mystery that may help them solve the riddle of the Givers...if it doesn’t destroy the Earth first! 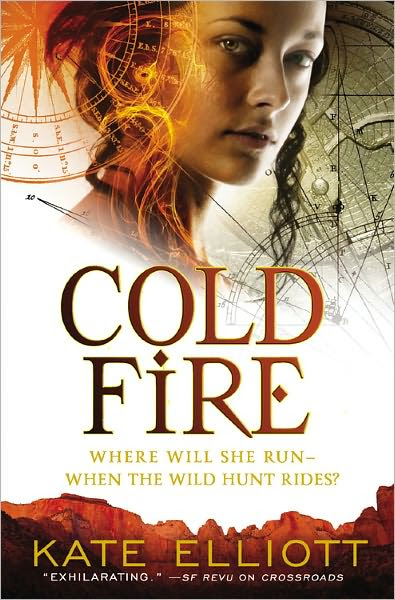 Cold Fire (Spiritwalker Trilogy #2) by Mark and I read/reviewed Cold Magic, the first in the trilogy upon publication last year. I think I liked it a bit more than Mark, though our reviews did catch the eye of Kate Elliott herself. .

Cat Barahal and her beloved cousin Bee think they have reached a safe place to shelter. But the Cold Mages who are conspiring to take them prisoner are closing in. The warlord who hopes to conquer all Europa is convinced their destiny is to aid him, whether they want to or not. And the man Cat was forced to marry is back, as vainly arrogant and annoyingly handsome as ever.

Worst of all, as Hallows' Night approaches, powers hidden deep within the spirit world are rising. Cat must seek allies against these threats and figure out who to trust, for if she makes the wrong choices, she'll lose everything.

Only one thing is certain. When Hallows' Night comes the Wild Hunt will ride - and it feeds on mortal blood. 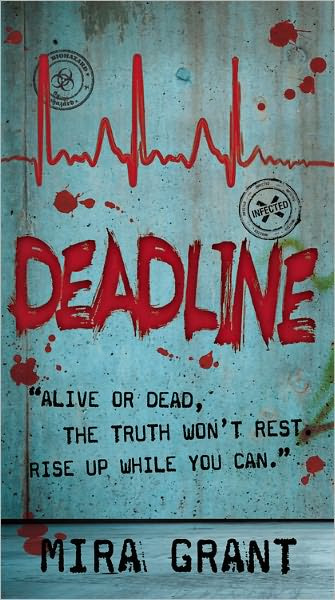 Deadline (Newsflesh Trilogy #2) by Mira Grant (Orbit Trade Paperback 06/01/2011) – . FEED really took me by surprise. I sort of dismissed initially as a “another zombie” book. Boy was I wrong, I was completely addicted to the book and this here’s the second of the trilogy.

Shaun Mason is a man without a mission. Not even running the news organization he built with his sister has the same urgency as it used to. Playing with dead things just doesn't seem as fun when you've lost as much as he has.

But when a CDC researcher fakes her own death and appears on his doorstep with a ravenous pack of zombies in tow, Shaun has a newfound interest in life. Because she brings news-he may have put down the monster who attacked them, but the conspiracy is far from dead.

Now, Shaun hits the road to find what truth can be found at the end of a shotgun.

Jacob Aldridge is still utterly devastated by the death of his fiancée when he suddenly encounters her doppelganger. Livia Aram’s uncanny resemblance to the late Rhoda Carothers so transcends coincidence that Jacob becomes obsessed with her. The intensity of his passion terrifies her until her compassion is roused by his desperate plight. A demon is stalking him, a succubus-like entity that feeds on human pain and desire. With the help of Jacob’s sister, Cecily, and Livia’s guardian, the mysterious Dr. Chang, they overcome the demon. Or so it appears. . . .

Jacob, Liva, and Cecily are all victims of a single curse, a curse which entrapped and destroyed their parents before them. Now fate has drawn their descendants together again, and the curse is playing out. Nothing can help them, until Cecily’s husband returns from abroad. Colonel Beckford has been missing for years; he has seen strange things and acquired strange powers in his absence. Now he will do whatever it takes to free his wife and eliminate the demon and its curse once and for all. 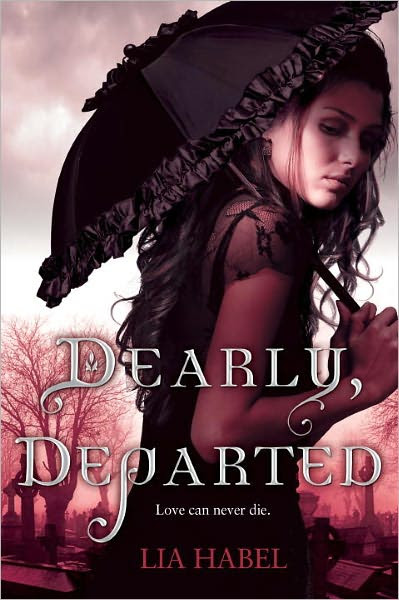 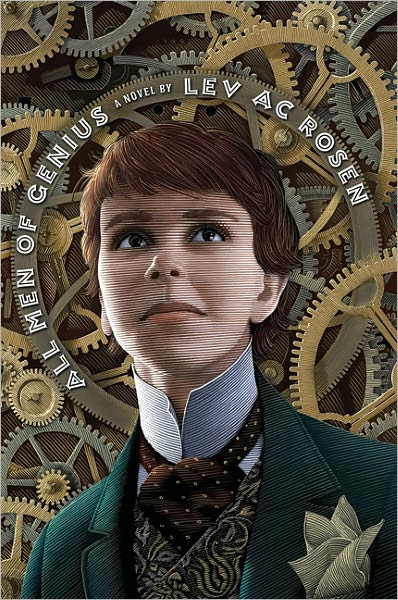 All Men of Genius by Lev A.C. Rosen (Hardcover 10/27/2011 Tor) – Debut novel for Rosen which has been garnering quite a bit of positive buzz and response. Seems like a Young Adult novel (and this is only judging the cover and description below), set in Victorian London. That, coupled with the gearson the cover tells us all this is an unabashed steampunk novel.


Inspired by Shakespeare’s Twelfth Night and Oscar Wilde’s The Importance of Being Earnest, All Men of Genius takes place in an alternate Steampunk Victorian London, where science makes the impossible possible.

Violet Adams wants to attend Illyria College, a widely renowned school for the most brilliant up-and-coming scientific minds, founded by the late Duke Illyria, the greatest scientist of the Victorian Age. The school is run by his son, Ernest, who has held to his father’s policy that the small, exclusive college remain male-only. Violet sees her opportunity when her father departs for America. She disguises herself as her twin brother, Ashton, and gains entry.

But keeping the secret of her sex won’t be easy, not with her friend Jack’s constant habit of pulling pranks, and especially not when the duke’s young ward, Cecily, starts to develop feelings for Violet’s alter ego, “Ashton.” Not to mention blackmail, mysterious killer automata, and the way Violet’s pulse quickens whenever the young duke, Ernest (who has a secret past of his own), speaks to her. She soon realizes that it’s not just keeping her secret until the end of the year faire she has to worry about: it’s surviving that long. 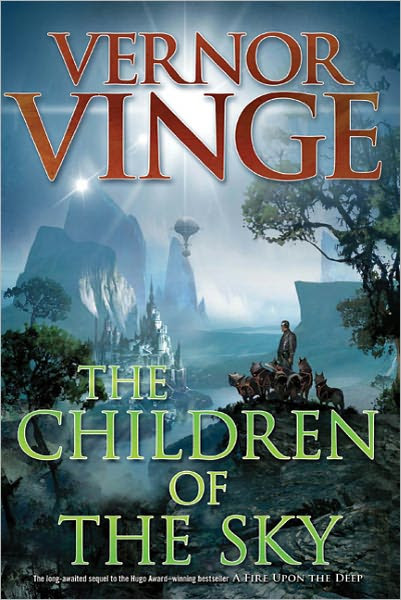 Children of the Sky (Zones of Thought #3) by Vernor Vinge (Hardcover 10/11/2011 Tor) – Vinge isn’t the most prolific of SF writers, but when he does publish a novel, it is a big deal. Especially when it is a direct sequel to his most well known novel, which is also one of the more highly acclaimed SF novels in the past couple of decades. I read A Fire Upon the Deep more than ten years ago and remember liking it quite a bit. I’m on the fence about reading this one, leaning towards a yes.


After nearly twenty years, Vernor Vinge has produced an enthralling sequel to his memorable bestselling novel A Fire Upon the Deep.

Ten years have passed on Tines World, where Ravna Bergnsdot and a number of human children ended up after a disaster that nearly obliterated humankind throughout the galaxy. Ravna and the pack animals for which the planet is named have survived a war, and Ravna has saved more than one hundred children who were in cold-sleep aboard the vessel that brought them.

While there is peace among the Tines, there are those among them—and among the humans—who seek power…and no matter the cost, these malcontents are determined to overturn the fledgling civilization that has taken root since the humans landed.

On a world of fascinating wonders and terrifying dangers, Vernor Vinge has created a powerful novel of adventure and discovery that will entrance the many readers of A Fire Upon the Deep. Filled with the inventiveness, excitement, and human drama that have become hallmarks of his work, this new novel is sure to become another great milestone in Vinge’s already stellar career..