Some new things up at SFFWorld recently, the first of which went up today – my interview with Michael J. Sullivan. Michael’s really in the process of hitting it big time as Orbit gives a wide release to his popular and acclaimed Riyria Revelations series.

Here’s a bit from the interview:

What has the transition been like going from primarily being published in eBook format to traditional published format?

It’s really hard to say…ask me in another year ;-) The books are just now showing up in stores and I’ll admit it was fun seeing how excited Robin was as she checked various Barnes and Nobles to see who had the books in stock. We were having breakfast together and she kept typing in various zip codes from around the country. (Davenport Iowa didn’t have any books on that day, but I see they do now.)

There has always been one dream of mine that probably never would have been realized when I was self- or small-press published. I’ve always wanted to be on a train, bus, or airplane and find someone that I didn’t know reading my book. Considering the odds, it still may never happen, but at least I now have a shot at that. If it ever does, I don’t know if I’ll have the courage to go up to them and say, “What do you think of that book you’re reading.” A negative comment would be soul crushing…but in my imagination that meeting always has a happy ending. 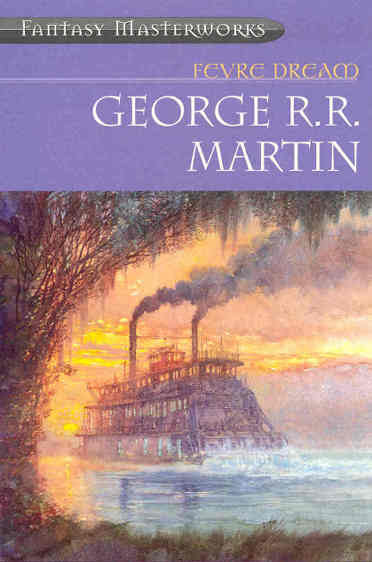 This is a dark, dark novel, impressively staged and brilliantly portrayed. The oppressive atmosphere of the American South in the eighteenth century, with its decaying plantations, slavery, racism and isolated humidity, is there across every page. It is harsh and it is supremely creepy. Some of the scenes are heart-rending in their matter-of-factness. (There’s also an awesome meal scene to rival events in Ice and Fire...)

To this backdrop the characterisation is, as we have come to expect from George, sublime. Of the main protagonists, Abner is the obsessed Captain Ahab of the Mississippi, forever searching for his love, the Fevre Dream, whilst his nemesis trawls the river looking for new blood. Joshua York is, by turns, both unearthly and oddly deserving of our sympathy. There’s a definite feel of the melancholic martyr here, almost Elric-like in his timbre. Though a vampire, he is a reluctant one who bears his responsibilities heavily. His life story, told in about twenty pages, is simply told without embellishment and is almost worthy of a book of its own. In comparison, the bad-guy Damon revels in his impressively malevolent actions, yet like most paragons of evil, is perfectly justified in his own mind that what he is doing is right.

I intend to look for Michael's books but I don't ride trains. I hope he sees someone soon.
I didn't know Martin wrote a vampire book.