We’ve got another couple of reviews up at SFFWorld this week, one I’ve been reading / seeing very good things about for a while and a re-issue of an author’s earlier work under his current pen-name.

We’ll kick off this week with my review. Michael J. Sullivan’s Riyria series has been garnering praise and sales over the past few years of its eBook/Small Press life. Recently (as in within the past year) Orbit signed Michael to a contract and is, with the launch of Theft of Swords, is republishing the six books as three omnibuses over the course of the next three months. Here’s my thoughts on the first omnibus, officially releasing today:: 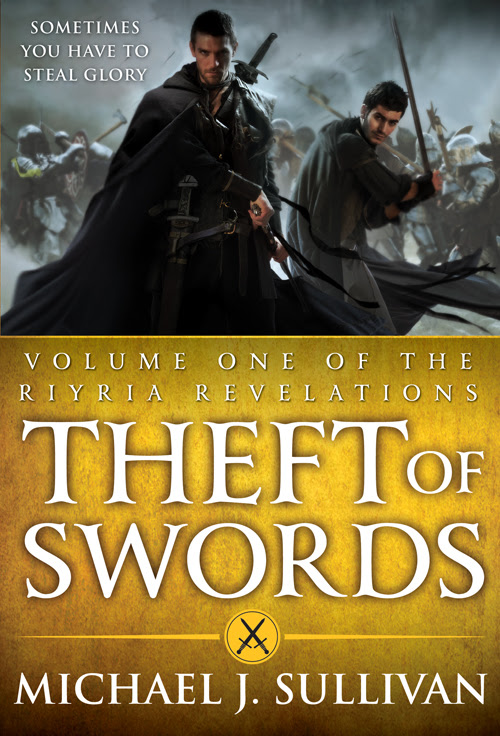 Theft of Swords contains The Crown Conspiracy and Avempartha, the first two novels in the series. Both books are just over 300 pages. In The Crown Conspiracy, readers are introduced to the anti-heroic duo of Royce Melborn, thief, and Hadrian Blackwater, mercenary. The two call themselves Riyria and are known as a competent duo, working outside the thieves’ guild taking on jobs for nobles who would otherwise not want to get their hands dirty. Off the bat, Sullivan gives readers fully formed protagonists who are mature and not the typical farmboys of epic fantasy. In fact, the feel I got throughout The Crown Conspiracy was more of a Sword and Sorcery adventure rather than Epic Fantasy. Of course, the comparison many people have made to Royce and Hadrian is to Fritz Leiber’s Fafhrd and the Grey Mouser. The relationship between Royce and Hadrian comes across as something that is long-standing, but as of yet, Sullivan has yet to reveal how the two rogues became partners. This is good, and a pattern of storytelling which Sullivan employs throughout The Crown Conspiracy and a method at which he excels.

Orbit was very smart to (1) snap up these books, (2) pair up two books into one omnibus, and (3) publish the three books in three months. Sullivan’s story fits in great with some of the recent books published by Orbit– I’d recommend the books to people who enjoyed the ‘old-school fantasy’ aspect of Daniel Abraham’s The Dragon’s Path and Brent Weeks Night Angel Trilogy. Outside of books published by Orbit, readers who enjoyed the modern sensibilities and characters of Scott Lynch’s Gentleman Bastard sequence and/or readers looking for something to remind them of the fun, adventurous romps associated with Fritz Leiber’s Fafhrd and the Grey Mouser sword and sorcery tales will find a lot to like in The Riyria Revelations.

In my review, I take a look at Jack Campbell has really been getting a lot of attention for his Lost Fleet Military SF saga this past year and more: sales and good buzz/reception. So what do the publisher’s do? Re-release the back list written under his real name, John G. Hemry, under his better known pen name Jack Campbell. Mark has a review of the first in Stark’s War series, which is also the name of the first book Stark’s War:

For books over a decade old they are pretty good mil-fic that Space Opera fans will like. Ethan Stark is the sergeant of a squadron in a future where people (well, Americans) have returned to the Moon and are establishing a network across the solar system. There is conflict between the corporate businesses of America and other countries, though the actual fighting takes place using multinational sponsored troops and materiel. There are ‘regular’ soldiers but the command groups, being too valuable to risk, are away from the battle-zone, directing actions through the lieutenants. All of this is shown live on television, which contributes by paying the costs of the engagements.
…
This is a solidly written, action-packed mil-SF novel. The action scenes are very well done, the main characters fairly straightforward, the motivations for the characters clear. There’s the odd misstep – a scene where an infantryman has to explain World War One to his fellow soldiers seemed a little far-fetched to me, and later an explanation of the Spartans, for example – but really most readers will probably know what to expect and have bought it to meet those criteria: heroism, difficult odds, impossible situations, they’re all here, but in the end it is the loyalty and bravery of the soldiers and their camaraderie against all complications (usually of the bungling officer kind), and their function to get a difficult job done, that makes this a worthwhile read. In these days of Big Brother television, it’s interesting to see a possible consequence in future war.

Thanks for the reviews, I've been hearing good things about Sullivan and I'm excited to check out "Theft of Swords."