A batch of December books from the fine folks at Night Shade Books plus a couple of other odds and ends from some of the usual suspects. 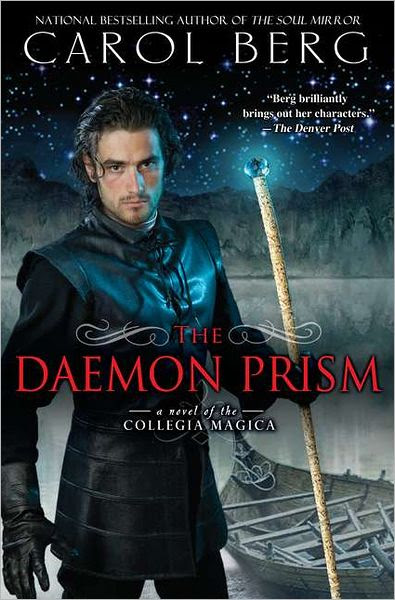 The Daemon Prism (A Novel of the Collegia Magica #3) by Carol Berg (Roc, Trade Paperback 01/03/2011) – Berg has been on my radar for a couple of years, even more so over the past year as a few SFFWorld forum members whose opinion I trust (Erfael, NickeeCoco, and suciul specifically) have recently been raving about her work. Yet another author who I want to remove from my unread list.

“Thou’rt Fallen, Dante. Born in frost-cold blood; suckled on pain. Thy repentance was ever a lie…”

Dante the necromancer is the most reviled man in Sabria, indicted by the King, the Temple, and the Camarilla Magica for crimes against the living and the dead. Yet no judgment could be worse than his enemies’ cruel vengeance that left him crippled in body and mind. Dante seeks to salve pain and bitterness with a magical puzzle - a desperate soldier’s dream of an imprisoned enchantress and a faceted glass that can fill one’s uttermost desires.

But the dream is a seductive trap that ensnares Dante’s one-time partners and unlocks his own deepest fears. Haunted, blind, driven to the verges of the world, Dante risks eternal corruption and the loss of everything he values to unravel a mystery of ancient magic, sacred legend, and divine truth… 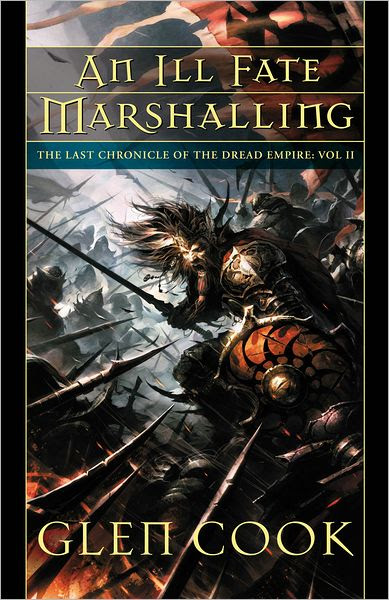 An Ill Fate Marshalling (The Last Chronicle of the Dread Empire Volume II) by Glen Cook (Night Shade Books Trade Paperback 12/06/2011) – I read the first two omnibus editions Night Shade published A Cruel Wind and A Fortress in Shadow a couple of years ago so it is very nice to see Night Shade continuing to publish the series, especially this new one.

King Bragi Ragnorson decides to join Chatelain Mist's coup against the Dread Empire. Varhlokkur - the King's wizard - tries to dissuade Ragnorson from this chosen path, but only the drum-beat of war is heard. The King's Spymaster Michael Trebilcock joins with the wizard to stave off The Ill Fate Marshaling, to no effect.

Many of the characters from past volumes take center stage, and the climatic events of this book shake the world of the Dread Empire to its very core, creating A Path to Coldness of Heart. Glen Cook's final Dread Empire novel was to have been published 20 years ago, but the manuscript was stolen, and the fate of The Dread Empire has been in Limbo - until now! Night Shade is proud to present the long delayed final Dread Empire Trilogy, of which An Ill Fate Marshaling is Volume 2. 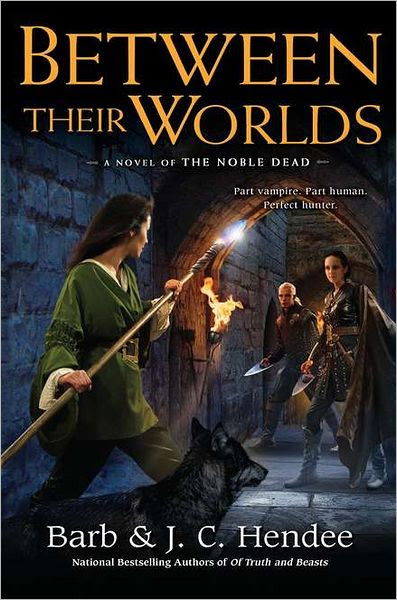 Between Their Worlds (The Twelfth Novel of the Noble Dead) by Barb and J.C. Hendee (Roc, Hardcover 01/03/2011) – Another year passes, and almost exactly to the date, the prolific Hendees publish another installment in their Vampire Epic Fantasy saga. I’d wanted to read the first one for a while, but it keeps getting pushed back.

Magiere and Leesil must rescue Wynn Hygeort from her captivity in the Guild of Sagecraft. But Wynn doesn't want to give up access to the ancient scrolls that may help them locate the last of the magical Orbs coveted by the Ancient Enemy. 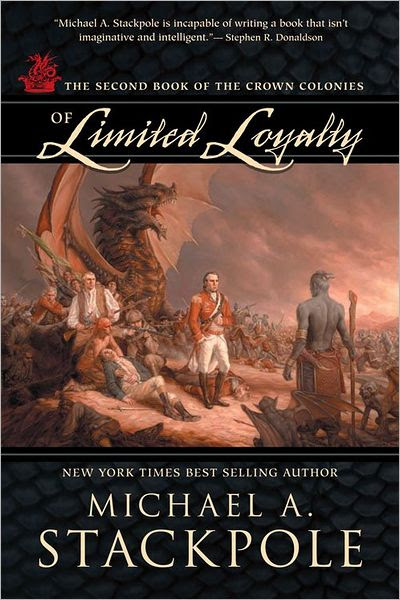 Of Limited Loyalty (The Second Book of The Crown Colonies) by Michael A. Stackpole (Night Shade Books Trade Paperback 12/06/2011) – Michael Stackpole is one of the more prolific genre authors currently being published. What I’ve read by him I enjoyed, though it is only a small portion of what he’s written. Between the various writing projects and his podcasts, I wonder if he ever sleeps. I have a copy of the first in the series (when it was a free Kindle book) so I may just get to this series which seems to have thematic similarities to Naomi Novik’s Temeraire books. .


1767. In the three years since defeating the Tharyngians at Anvil Lake, The Crown Colonies of Mystria have prospered. Colonists, whether hunting for new land or the Promised Land of prophecy, have pushed beyond the bounds of charters granted by the Queen of Norisle. Some of these new communities have even had the temerity to tell the Crown they are no longer subject to its authorities. To survey the full extent of the western expansion, the Crown has sent Colonel Ian Rathfield to join Nathaniel Woods, Owen Strake, and Kamiskwa on an expedition into the Mystrian interior. They discover a land full of isolated and unique communities, each shaped in accord with the ideals of the founders. Conflicts abound among them, and old enemies show up at the least useful moments. Worse yet, lurking out there is a menace which the Twilight People only know from folklore as the Antedeluvians; and westward penetration stumbles into their lands and awakens them. Alerted to this threat by his men, Prince Vlad petitions the Crown to send troops and supplies to destroy this new and terrifying enemy. The Crown refuses, citing massive debts from the last war. They dismiss Vlad''s claims as fantasy, and impose a series of taxes on Mystrian trade to finance their own recovery. Faced with fighting an inhuman foe in a land seething with resentment against the Crown, Vlad must unite the Colonies in a common cause, or preside over their complete destruction. 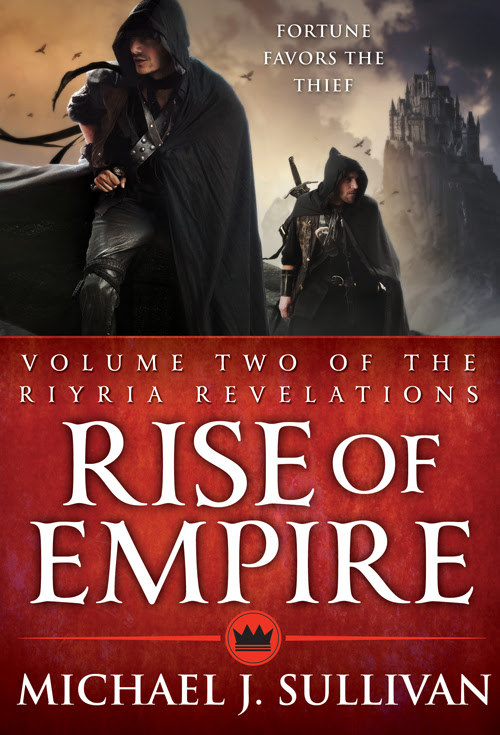 The adventure continues as Royce and Hadrian aid the struggling kingdom of Melengar as it alone stands in defiance against the newly formed empire. War approaches and a desperate gamble behind enemy lines is their only chance at forming an alliance with the Nationalists to the south.

But Royce has plans of his own as he uses this opportunity to discover if an ancient wizard is using Riyria as pawns in his own bid for power. To find the truth, Royce must unravel Hadrian's hidden past. What he discovers will lead them to the end of the known world, on a journey rife with treachery and intrigue.


When author Michael J. Sullivan self-published the first books of his Riyria Revelations, they rapidly became ebook bestsellers. Now, Orbit is pleased to present the complete series for the first time in bookstores everywhere. 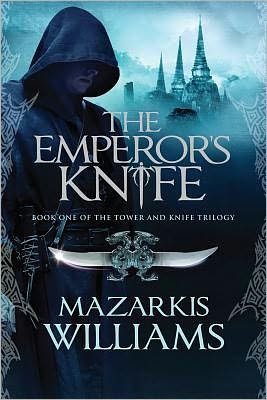 The Emperor's Knife (Book One of The Tower and the Knife Trilogy) by Mazarkis Williams (Nightshade Books, Hardcover 12/06/2011) – Debut novel, which was published earlier in the year in the UK, which has drawn some comparisons to Robin Hobb and Daniel Abraham. Yet another debut from Night Shade which is generating a great deal of positive buzz on teh intarwebs.

There is a cancer at the heart of the mighty Cerani Empire: a plague that attacks young and old, rich and poor alike. Geometric patterns spread across the skin, until you die in agony, or become a Carrier, doing the bidding of an evil intelligence, the Pattern Master. Anyone showing the tell-tale marks is put to death; that is Emperor Beyon''s law...but now the pattern is running over the Emperor''s own arms. His body servants have been executed, he ignores his wives, but he is doomed, for soon the pattern will reach his face. While Beyon''s agents scour the land for a cure, Sarmin, the Emperor''s only surviving brother, awaits his bride, Mesema, a windreader from the northern plains. Unused to the Imperial Court''s stifling protocols and deadly intrigues, Mesema has no one to turn to but an ageing imperial assassin, the Emperor''s Knife. As long-planned conspiracies boil over into open violence, the invincible Pattern Master appears from the deep desert. Now only three people stand in his way: a lost prince, a world-weary killer, and a young girl from the steppes who saw a path in a pattern once, among the waving grasses - a path that just might save them all!

Mazarkis Williams is a writer with roots in both the US and UK, having worked in and been educated in both countries. Each year is divided between Boston and Bristol and a teleport booth is always top of the Christmas wish-list.

Mazarkis has degrees in history and physics with a diverse set of interests accumulated while misspending a hectic youth. Cooking has always been a passion and in addition to feeding six children and a sizable herd of cats Mazarkis regularly caters for crowds of permanently hungry friends.