Just one review so far this week and its mine. I *might* have another later in the week, but we shall see. Confession time, I originally started the book I reviewed in 2007, the year following its publication and stopped halfway through to read and review a then forthcoming novel. A few years later, this series gets tons of praise from readers whose opinions I respect and Abraham publishes two terrific novels in 2011. So I realized with greater excitement I need to revisit Daniel Abraham’s The Long Price Quartet, something I’d planned for a while. (not to mention that these books have gorgeous covers by Stephan Martinier) All that said, here’s my review of the first book A Shadow in Summer 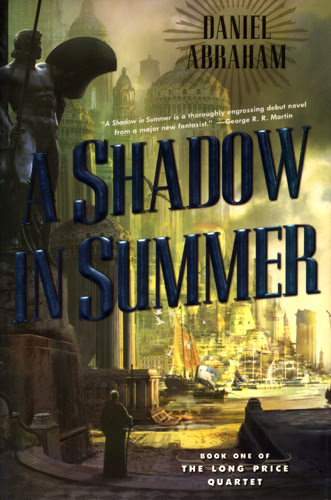 A Shadow in Summer has many elements in common with Abraham’s fantasy contemporaries – imagined world with echoes of our own, archaic governments that hearken to our past, hints of magic and non-human creatures. Where the novel (and series) differs is in how these elements play together in Abraham’s sandbox. The magic is subtle, only one andat is a primary player in A Shadow in Summer, the imagined world feels more like an old-world Asian setting rather than what’s become the template – Renaissance/Middle Ages Europe. Though the ripple effects of events in the novel are global, it is a plot involving not that many characters, or in other worlds, a world shaped not by war but a chosen few in power. Hints of the power of commerce which take more of a role in The Dragon’s Path can be seen here in A Shadow in Summer. The comparison to Guy Gavriel Kay has been made by many people and I’ll add my voice to the crowd, it is difficult to ignore if you’ve read both writers. Another writer to whom I’d compare Abraham, at least with this novel, is Sean Russell – subtle magic, elegant prose, and ripple effects of a few men on a large scale.


…
The movements throughout the novel are like that, subtle in the small pieces until the results come to light as something far greater than the sum of their parts. What is unfortunate is that this series did not get the attention from the fantasy reading masses it rightly deserved when first published, having attained something of a cult status. With Abraham’s profile growing in recent years – close ties with George R.R. Martin will do that, not to mention his two great novels I mentioned earlier with Orbit US, this series is growing out of that ‘cult’ status into a defining Fantasy work for the early 21st Century. Smartly, Tor books the original U.S. publisher of The Long Price Quartet is ensuring the series will be imprint by issuing two omnibus editions containing the four books.

Email ThisBlogThis!Share to TwitterShare to FacebookShare to Pinterest
Labels: Catching up with the Classics, Daniel Abraham, Debut Novels, The Long Price Quartet, Tor

I loved this series. Only read the first two (in the collected UK edition). Loved the world, writing, world-building, characters and story. A little slow in places, but I didn't really mind this.