Back to two reviews, but we jump a day. Mark looks at a slight shift in genre for a very popular fantasist whilst I continue my season journey through Daniel Abraham’s The Long Price Quartet.


Mark and I are both big fans of Tad Williams, but Mark was lucky enough to read through The Dirty Streets of Heaven before my copy arrived: 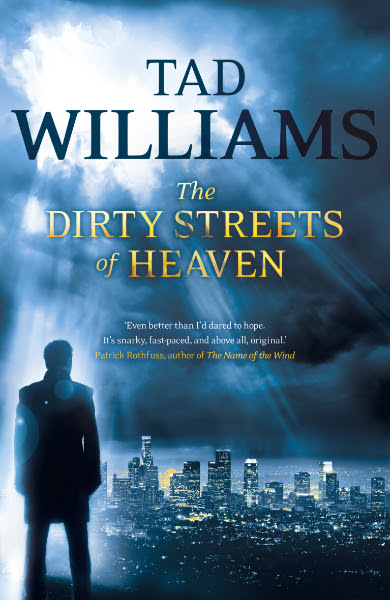 For those used to Tad’s more traditional Fantasy (such as Memory, Shadow and Thorn and the Shadowmarch series) this one is different. So different in that, had the name not been on the front, I wouldn’t have said they were the same writer.

This is being widely seen as Tad’s take on Urban Fantasy: you know, moody male with issues, living a tough life, with ‘problems’, usually of the supernatural type.
…
My inner critic made me think that this tight focus could leave to a rather flimsy novel. I was pleasantly surprised that it didn’t. Tad doesn’t avoid the big issues – How do you get to Heaven? What is heaven like? What happens to atheists when they die? – but he does cleverly side-slip them, by pointing out that he’s given up questioning and just accepts that you can’t know everything, and that often things are rather vaguely remembered, if at all. It’s rather like saying you don’t need a detailed knowledge of anatomy or biology to be human, which is probably how most of us live our lives, anyway.

Abraham jumps another fourteen years between books at the beginning of An Autumn War, Otah is entrenched in his role as ruler trying to keep his nation together. While Otah is busy ruling, Maati spends much of his time in the novel reflecting. He’s a librarian now and takes great care to recount his experience with the andat (the powerful beings magically wrought who embody a powerful thought or idea brought to life), what went wrong with Seedless and Stone-Made-Soft (the andats featured in the previous two novels.  Maati’s experiences and life have given him a greater maturity and sense of care. Instead of rushing to the possibility of having an andat of his own, Maati realizes such a thing could very easily turn out to be the dark reflection of one’s hopes.
…
One thing I’ve remarked about this series is the idea of consequences. Here in The Autumn War, Abraham provides a vantage point into the world outside of the cities where the andat have such an impact. As previously indicated, Galt and how they’ve lived in fear and hatred of the poet sorcerers and their pet andat which are thoughts made form and life. Rather than a small glimpse, Abraham follows the story from both sides of the conflict, much as he laid out the story from both sides of the conflict in A Betrayal in Winter. The ultimate consequences to affect this world; it would seem, is the existence of the andat, for these magically born creatures keep one nation in power with the others in the shadows.