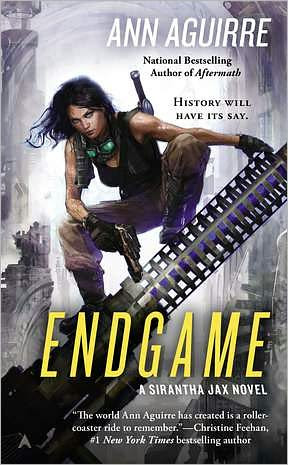 Endgame (Samantha Jax (Ace Paperback 04/28/2012) – Sixth (and final?) in a “romantic science fiction” about a young girl, Jax, who has the ability to jump ships through grimspace. Aguirre is quite prolific, this is the sixth book in this series in four years and she’s penned over a dozen in about a deecade

REGRET NOTHING.
Sirantha Jax has the J-gene, which permits her to “jump” faster-than-light ships through grimspace. She loves nothing more than that rush, but the star roads have to wait…

Her final mission takes her to La’heng, a planet subjugated during first contact. Since then, the La’hengrin homeworld has been occupied by foreign conquerors.

All that’s about to change.

Now, as part of a grass-roots resistance, Jax means to liberate the La’hengrin. Political intrigue and guerrilla warfare are new to her; this will be the most dangerous game she’s ever played—spies and conspiracies, a war of weapons and hearts, and everyone might not make it out alive… 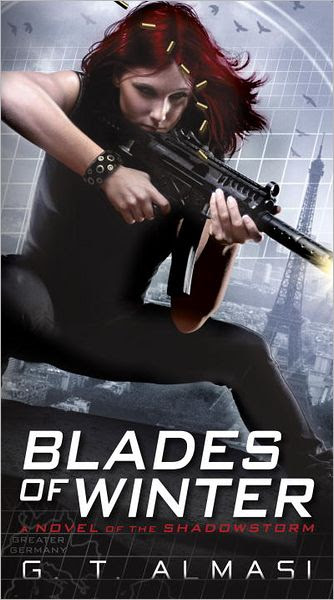 Blades of Winter (Shadowstorm #1) by G.T. Almasi (Del Rey Tall Paperback 08/28/2012) – This is Almasi’s debut novel and launch of a new series that seems quite appealing. The first thing I thought of when I received the book was Joel Shepherd’s terrific Cassandra Kresnov novels. I’d heard/seen nothing about this book before receiving it, which is pleasantly surprising.

In one of the most exciting debuts in years, G. T. Almasi has fused the intricate cat-and-mouse games of a John le Carré novel with the brash style of comic book superheroes to create a kick-ass alternate history that reimagines the Cold War as a clash of spies with biological, chemical, and technological enhancements.

Nineteen-year-old Alix Nico, a self-described “million-dollar murder machine,” is a rising star in ExOps, a covert-action agency that aggressively shields the United States from its three great enemies: the Soviet Union, Greater Germany, and the Nationalist Republic of China. Rather than risk another all-out war, the four superpowers have poured their resources into creating superspies known as Levels.

Alix is one of the hottest young American Levels. That’s no surprise: Her dad was America’s top Level before he was captured and killed eight years ago. But when an impulsive decision explodes—literally—in her face, Alix uncovers a conspiracy that pushes her to her limits and could upset the global balance of power forever.
“Smart, sassy, and seriously appealing: a stunning debut.”—Jeff Long, New York Times bestselling author of The Descent 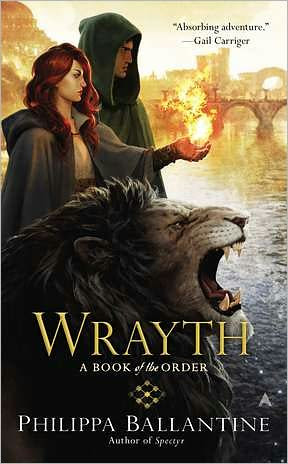 Wrayth (A Book of the Order #3) by Philippa Ballantine (Roc Mass Market Paperback 08/28/2012) – One of three ongoing series Ballantine has on the shelves, this one seems more straightforward fantasy than her other two sagas.

In the Empire of Arkaym, the Order of Deacons protects and shelters the citizens from the attacks of the unliving. All are sworn to fight the evil forces of the geists—and to keep the world safe from the power of the Otherside…

Although she is one of the most powerful Deacons in the Order, Sorcha Faris is still unable to move or speak after her last battle. Even her partner, Merrick Chambers, cannot reach her through their shared Bond. Yet there are those who still fear Sorcha and the mystery of her hidden past.

Meanwhile, Merrick has been asked to investigate a new member of the Emperor’s Court. But when Sorcha is abducted by men seeking Raed Rossin, the shapeshifting rival to the throne, Merrick must choose where his loyalties lie. 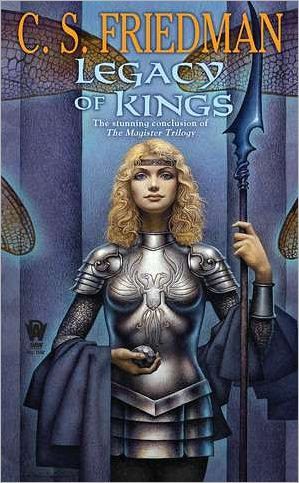 Legacy of Kings (Magister Trilogy Book 3) by C. S. Friedman (DAW Mass Market Paperback 09/04/2012) – Concluding volume of Friedman’s High fantasy trilogy, which I reviewed about a year ago when it published in Hardcover, following the first two Feast of Souls and Wings of Wrath.

The young peasant woman Kamala has proven strong and determined enough to claim the most powerful Magister sorcery for herself-but now the Magisters hunt her for killing one of their own. Her only hope of survival lies in the northern Protectorates, where spells are warped by a curse called the Wrath that even the Magisters fear. Originally intended to protect the lands of men from creatures known only as souleaters, the Wrath appears to be weakening-and the threat of this ancient enemy is once more falling across the land. 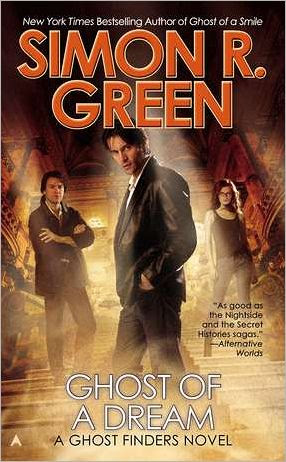 Ghost of a Dream (A Ghost Finder Novel #3) by Simon R. Green (Ace, Mass Market Paperback 04/28/2012) – Green is EXTREMELY prolific, he’s got three series currently active (as of this posting) with the fine folks at Penguin, this is another supernatural fantasy/mystery hybrid.

The Ghost Finders are investigating the long-abandoned Haybarn Theater, which is being renovated. Work has been thrown off-schedule by the some peculiar activities. And after the potentially world-altering recent events of their previous assignment, the team thinks that a haunted theater (aren’t they all?) will be a walk in the park. Until they encounter the Phantom of the Haybarn — an ancient evil whose ability to alter reality itself will test the skills, science, and blind luck of the Ghost Finders to the limit. 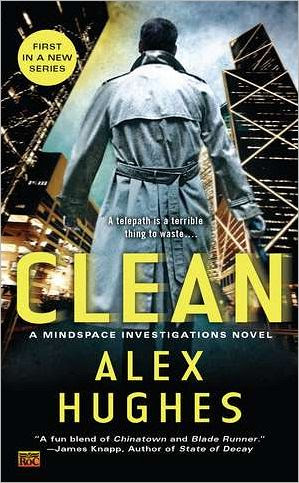 A RUTHLESS KILLER—
OUT OF SIGHT, OUT OF MIND

I used to work for the Telepath’s Guild before they kicked me out for a drug habit that wasn’t entirely my fault. Now I work for the cops, helping Homicide Detective Isabella Cherabino put killers behind bars.

My ability to get inside the twisted minds of suspects makes me the best interrogator in the department. But the normals keep me on a short leash. When the Tech Wars ripped the world apart, the Guild stepped up to save it. But they had to get scary to do it—real scary.

Now the cops don’t trust the telepaths, the Guild doesn’t trust me, a serial killer is stalking the city—and I’m aching for a fix. But I need to solve this case. Fast. I’ve just had a vision of the future: I’m the next to die. 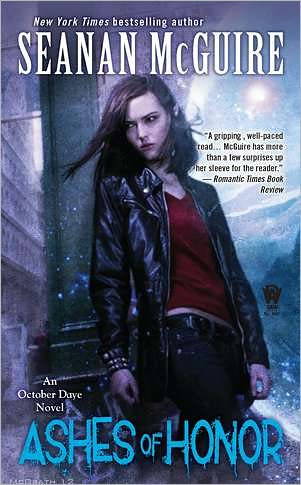 It’s been almost a year since October “Toby” Daye averted a war, gave up a county, and suffered personal losses that have left her wishing for a good day’s sleep. She’s tried to focus on her responsibilities — training Quentin, upholding her position as Sylvester’s knight, and paying the bills — but she can’t help feeling like her world is crumbling around her, and her increasingly reckless behavior is beginning to worry even her staunchest supporters.

To make matters worse, Toby’s just been asked to find another missing child…only this time it’s the changeling daughter of her fellow knight, Etienne, who didn’t even know he was a father until the girl went missing. Her name is Chelsea. She’s a teleporter, like her father. She’s also the kind of changeling the old stories warn about, the ones with all the strength and none of the control. She’s opening doors that were never meant to be opened, releasing dangers that were sealed away centuries before — and there’s a good chance she could destroy Faerie if she isn’t stopped.

Now Toby must find Chelsea before time runs out, racing against an unknown deadline and through unknown worlds as she and her allies try to avert disaster. But danger is also stirring in the Court of Cats, and Tybalt may need Toby’s help with the biggest challenge he’s ever faced.

Toby thought the last year was bad. She has no idea.

“Toby’s unusual heritage and her uneasy relationships with her mother’s family will remind readers of Briggs’ Mercy Thompson series, and Thompson fans will appreciate Toby’s tough and self-reliant character…a must for fans of genre-bending blends of crime and fantasy.” — Booklist (starred review) 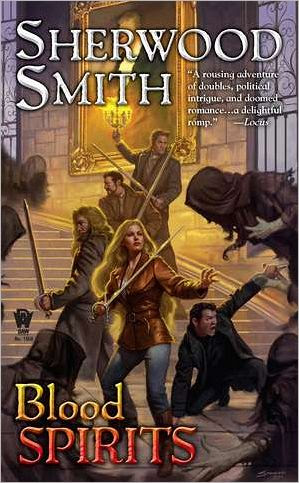 With the man she loves set to marry a look-alike princess, Kim Murray returns to California from the magical country of Dobrenica to heal her broken heart. But family politics soon have her leaving for London, where she is forced into a duel with a Dobrenican nobleman. He reveals that her great sacrifice, leaving Alec, was a disaster. To fix her mistake, Kim returns to Dobrenica, but what she finds there is far more shocking and dangerous than she ever imagined. Not just politics and personalities but ghosts and magic, murder and mystery, await her as she struggles to understand the many faces of love. Once again Kim has to take sword in hand as she tries to make peace and learn the truth. Only, whose truth?

e Mongoliad began as a social media experiment, combining serial story-telling with a unique level of interaction between authors and audience during the creative process. Since its original iteration, The Mongoliad has been restructured, edited, and rewritten under the supervision of its authors to create a more cohesive reading experience and will be published as a trilogy of novels. This edition is the definitive edition and is the authors' preferred text.

This riveting second installment in Stephenson and company’s epic tale focuses on the aftermath of the world-shattering Mongolian invasion of 1241 and the difficult paths undertaken by its most resilient survivors.

The Shield Brethren, an order of warrior monks, search for a way to overthrow the horde, even as the invaders take its members hostage. Forced to fight in the Mongols’ Circus of Swords, Haakon must prove his mettle or lose his life in the ring. His bravery may impress the enemy, but freedom remains a distant dream.

Father Rodrigo receives a prophecy from God and believes it’s his mission to deliver the message to Rome. Though a peaceful man, he resigns himself to take up arms in the name of his Lord. Joining his fight to save Christendom are the hunter Ferenc, orphan Ocyrhoe, healer Raphael, and alchemist Yasper, each searching for his place in history.

Deftly blending fact and fantasy, The Mongoliad: Book Two captures the indomitable will to survive against immense odds. 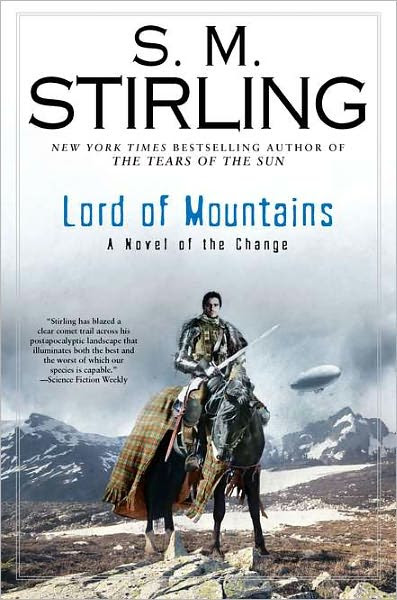 Lord of Mountains (A Novel of the Change #6) by S. M. Stirling (Roc Hardcover 09/04/2012) – Like clockwork, it’s September and time for a new novel in Stirling’s Change universe where technology stops working.

“[A] gifted author,”* S.M. Stirling created a fascinating neo-medieval world in his Novels of the Change where the remnants of humanity struggle to survive in a post-technological environment. Now, the New York Times bestselling epic continues as a king faces a challenge beyond the battlefield…

Rudi Mackenize, now Artos the First, High King of Montival, and his allies have won several key battles against the Church Universal and Triumphant. But still the war rages on, taking countless lives, ravaging the land once known as the United States of America. Artos and his Queen, Mathilda, must unite the realms into a single kingdom to ensure a lasting peace.

If the leaders of the Changed world are to accept Artos as their ruler, he will need to undertake a quest to the Lake at the Heart of the Mountains, and take part in a crowning ceremony—a ceremony binding him to his people, his ancestors, and his land.

Then, once he has secured his place and allegiances, Artos can go forward, and lead his forces to the heart of the enemy’s territory…