A Crown of Swords - Wheel of Time Re-Read

Wherein I post my latest installment of my Wheel of Time re-read (and once I hit Crossroads of Twilight read through for the first time) in anticipation of A Memory of Light publishing in January 2013. As I intimated in a past post, I’d initially read the series immediately after graduating college back in 1997 and alternated a book in this series with another book from my then-quite small Mount Toberead, which was probably more like Knoll Toberead. If I want to catch up with the remaining six novels in the series prior to the release of A Memory of Light, I’ll have to implement a similar reading plan. If nothing else, I am looking forward to tackling this series again for the first time.

Anyway, off to my ‘reaction’ to A Crown of Swords

Almost a year after reading book six in The Wheel of Time (Lord of Chaos), I dive back into the pattern with A Crown of Swords. I know the late cover artist Darrell K. Sweet has been criticized heavily (and sometimes rightfully so, just look at the of Lord of Chaos), there were times when he captured something pretty well and I think that’s the case with A Crown of Swords. Granted, Rand looks likes he’s flexing for the reader, but I like the creepy feel of Shadar Logoth and for once, Sweet gets the Trolloc correct as a monster-headed human rather than a man in a horned helmet.

What about words/story in the book? Well, I’ll admit that A Crown of Swords might be the book I remember the least from my initial reading of the series over a decade ago. Maybe that is due, in part, to how large of an impact the events in other books felt when compared to this one (The Shadow Rising has Rand enter Rhuidean and receive the Dragon markings on his while Mat is hanged, in The Shadow Rising, Moiraine “dies” and Lord of Chaos features the battle of Dumai Wells). Or maybe the glossing over of A Crown of Swords is because I read it so fast, but re-reading it helped me to enjoy it a great deal more than I recalled and it turns out some significant events occur here.

For starters, the characters who feature the most in this are Mat, Egwene, Perrin, Rand and Nynaeve. The two characters who have risen in my estimation during the course of this re-read is Mat and as previously mentioned Nynaeve. Unfortunately, when these two characters on the page together interacting, the scenes are a bit frustrating. They butt heads all the time to the point where it is almost irrationally unbelievable. But, reading through one of Leigh Butler’s terrific pieces on her Re-Read project sort of cast things into a different light, that Mat managed to pinpoint some nerves with Nynaeve early in the story and since, then Nyn’s been a bit fearful of the man with luck.

One of the more uncomfortable elements in this novel is the whole Mat-Tylin ‘relationship’ which can be seen as Tylin raping Mat. In none-too-uncertain terms, she forces him at knife-point to sleep with her. On one hand, Jordan has continually alluded to Mat being – as the kids’ say these days – a playa’ yo. Here with Tylin, he’s the quarry and she’s the pursuer, which turns the tables a bit. He does say no, however. The ladies reaction, Nynaeave and Elayne, is derision which casts a lot of the gender relationships in WOT into question.

One of the better scenes was when Mat and Birgitte realized they could be drinking buddies. For some reason, I thought they’d met previously but that was really only in passing in The Great Hunt. Hell, a majority of the top scenes in this installment involve Mat, not the least of which is the conclusion to his storyline with the gals as they finally retrieve the Bowl of Winds. His determination to protect Elayne and see the mission through to its end is what elevated him above Perrin in my eyes. It also doesn’t help Perrin’s case that his relationship with Faile begins to annoy in this volume. 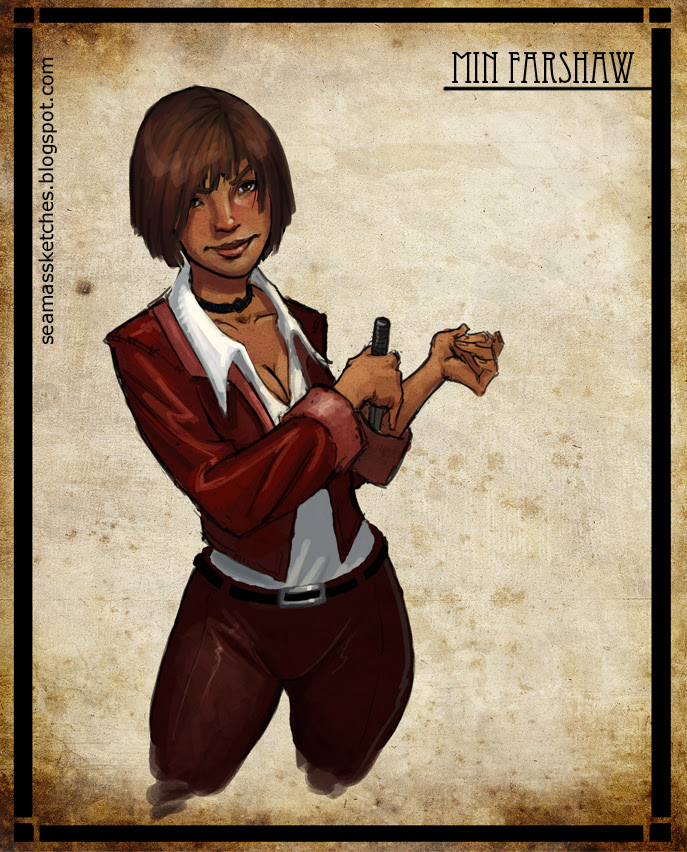 Rand’s power really starts to go to his head with good and not-so-good consequences, he becomes much more headstrong in A Crown of Swords and the weight of the world begins to wear him down. Of course it doesn’t help that he’s hearing the voice of Lews Therin in his head. Still, his anger towards the Aes Sedai is a blazing fire when the novel opens but becomes more tempered thanks to Perrin and Min. Of the three ‘wives of Rand al’Thor’ I think Min is the one whom I’ve enjoyed the most. Of the three, if I were Rand, Min is the one with whom I try to devote the most time Her playfulness with Rand has always been a strong point and she’s the one who grounds him the most, I think.

That cover image I mentioned before? Yeah, as I said if Sweet doesn’t necessarily capture some of the specifics perfectly, I think it captures the mood perfectly of Rand’s encounter with Sammael and the darkness of Shadar Logoth. The events preceding that encounter whereby Padan Fain re-ignites Rand’s abdominal wound during an attack from creatures of the dark, of course, contrasts his prideful boasts and wish to show off. Cadsuane also takes charge, along with Asha'man in healing Rand. Once healed, Rand and the Asha’man head to Shadar Logoth to take care of Sammael.

Jordan also continues to show the parallel development of the two new Amyrlin Seats – Elaida and Egwene. Both begin to believe more in themselves, but the results couldn’t be more different. Where Egwene’s development is more of becoming who she is supposed to be in realizing her true power and abilities, Elaida’s descent into a power-trip induced delusion continues. The largest evidence for Elaida’s thinning grip on sanity and reality is the fact that she wishes to build her personal tower in Tar Valon larger than that of the White Tower.

Some of the things I glossed over included the Aiel scenes and the Perrin/Faile stuff; A Crown of Swords is again really where Mat surpassed Perrin in my estimation. Even some of the scenes with Elaida and Egwene were glossed over a bit this time ‘round. On the whole, A Crown of Swords turned out to be a very solid entry in the series.So, this turned out to be a very enjoyable read for me that might likely because I’d forgotten so much of what happened. Again, more than a decade since I first read the book, probably about fifteen years now that I reconsider. Things were accomplished in this volume: Quest for Magic Object – DONE. Hero falls then defeats villain – DONE. Character Development – CONTINUING. Foundation for future volumes: CONTINUING.  All in all, a very enjoyable read and reacquantance with Randland.

On to The Path of Daggers in a couple of weeks.

As always, Leigh Butler's Re-Read is great whilst reading through the books, as are The Wheel of Time Wiki and Adam Whitehead's (The Wertzone) extensive posts on The Wheel of Time, including his own Story So Far posts.
at 9/10/2012

Email ThisBlogThis!Share to TwitterShare to FacebookShare to Pinterest
Labels: A Crown of Swords, Robert Jordan, Wheel of Time, WOT Re-Read

This is the book I'm stalled on at the moment. I need to get back into it, I just needed a WoT break as I find myself needing after about every book at the moment.

While there are some slow parts (but what WOT book DOESN'T have slow parts), this one had lots of good stuff in it. I'm most nervous about reading CROSSROADS since (1) it is reviled as the worst in the series and (2) I stopped with WINTER'S HEART

My rereads were done at Lord of Chaos. Now I'm very nervous about Crossroads as well. :)