I catch up with a book Mark read earlier in the year while Mark continues on with a newly found series he’s quite enjoying and Nila takes a look at a Superhero novel.


James S. A. Corey’s Expanse sequence has received deserved award nominations with the first volume and the second volume has already received a fair amount off praise. Here, I give my thoughts on Caliban’s War:

The plot itself is fairly familiar, ship on the run trying to find a missing girl, same macguffin from previous novel, interplanetary politics. But so what, the novel is a lot of fun and perhaps more fun than it’s predecessor because we can see more of the characters both new and old. With familiar situations established, Corey can delve further into the interpersonal relationships of the crew of the Rocinate, and more importantly, give us new strong characters to follow. While Prax is an interesting character, the ladies really shine in Caliban’s War. Bobbi is a complex character - a large, imposing woman whose thoughts and actions come across very naturally and realistic. Conversely, the ascerbic Avasarala provides some snarky humor throughout. Her uncompromising attitude is balanced by her interactions with her family. There’s also a good deal of political weaving especially through her character as she interacts with people very high up in the solar system’s hierarchy including a particularly grin-inducing scene with one individual at the novel’s conclusion. I hope to see much more of her in this series as it progresses..

Mark catches up with the second installment of Christopher Fowler’s Bryant and May Mystery, and the book is The Water Room: 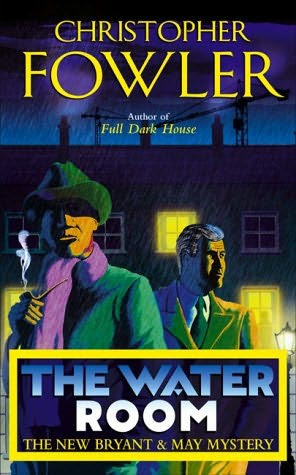 With the events of Full Dark House (reviewed here) I found the series a very pleasant surprise. The Water Room develops them further. Whereas the first book introduced them in their most recent reincarnation (they did appear in some of Christopher’s other writing previously) and Full Dark House was mainly about their first case back in 1940’s London, this one is resolutely ‘now’, with the book’s beginning at the time of the reopening of the redecorated Peculiar Crimes Unit’s base after the explosion in Full Dark House.

It’s not long before we’re into ‘the weird stuff’. Bryant is contacted by an old colleague whose elderly sister has been found dead in her house and in possibly mysterious circumstances. The body was in the cellar, sitting, as if at rest, but with water around her feet and Thames river water in her mouth. The house is nowhere near the river. Bryant is intrigued and involves the PCU. However, when her various and varied neighbours are interviewed, it seems initially innocuous, a case of relatively simple sudden-death.

Last, and most certainly not least, Nila jumps aboard the growing trend of Superhero Fiction in her review of Adam Christopher’s Seven Wonders:

Set in a fictitious town in southern California, Seven Wonders introduces us to Tony Prosdocimi; a regular guy, nothing special. Except for the fact that at the ripe age of 23, he has suddenly developed superhuman powers. Powers just like the Seven Wonders, a team of superheroes that supposedly protect the City of San Ventura from the last supervillain on earth, The Cowl.
…
After this, the story then follows a myriad of protagonists and antagonists vying to either save the city, save their own skin, or hold the city hostage for some unsaid reason. In the midst of it all, a regular guys ends up being the last thing he thought he’d be, a cop’s dead body get’s hijacked by an alien, and the world is indeed saved - but not safe.