Another week, another set of review books arriving at the o' Stuff compund. 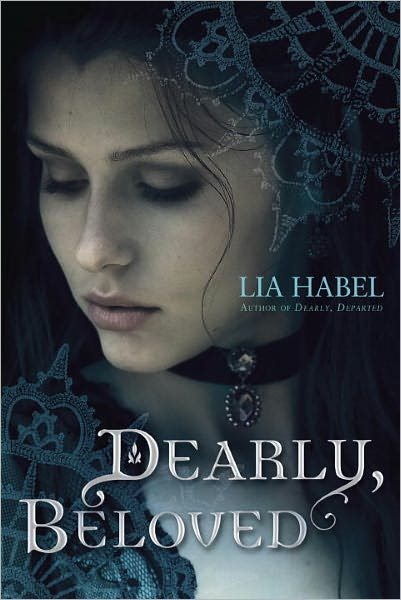 That’s the question that has New Victorian society fiercely divided ever since the mysterious plague known as “The Laz” hit the city of New London and turned thousands into walking corpses. But while some of these zombies are mindless monsters, hungry for human flesh, others can still think, speak, reason, and control their ravenous new appetites.

Just ask Nora Dearly, the young lady of means who was nearly kidnapped by a band of sinister zombies but valiantly rescued by a dashing young man . . . of the dead variety.

Nora and her savior, the young zombie soldier Bram Griswold, fell hopelessly in love. But others feel only fear and loathing for the reanimated dead. Now, as tensions grow between pro- and anti-zombie factions, battle lines are being drawn in the streets. And though Bram is no longer in the New Victorian army, he and his ex-commando zombie comrades are determined to help keep the peace. That means taking a dangerous stand between The Changed, a radical group of sentient zombies fighting for survival, and The Murder, a masked squad of urban guerrillas hellbent on destroying the living dead. But zombies aren’t the only ones in danger: Their living allies are also in The Murder’s crosshairs, and for one vengeful zealot, Nora Dearly is the number one target.

As paranoia, prejudice, and terrorist attacks threaten to plunge the city into full-scale war, Nora’s scientist father and his team continue their desperate race to unlock the secrets of “The Laz” and find a cure. But their efforts may be doomed when a mysterious zombie appears bearing an entirely new strain of the illness—and the nation of New Victoria braces for a new wave of the apocalypse. 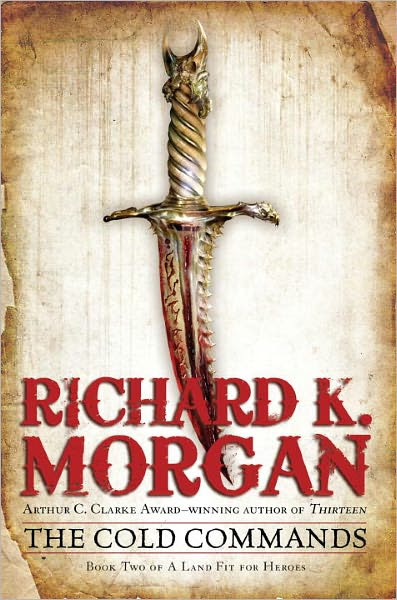 The Cold Commands (A Land Fit for Heroes #2) by Richard K. Morgan (Del Rey Trade Paperback 10/25/2012) – Trade paperback version of the novel I received in both hardcover and an ARC last year.

With The Steel Remains, award-winning science fiction writer Richard K. Morgan turned his talents to sword and sorcery. The result: a genre-busting masterwork hailed as a milestone in contemporary epic fantasy. Now Morgan continues the riveting saga of Ringil Eskiath—Gil, for short—a peerless warrior whose love for other men has made him an outcast and pariah.

Only a select few have earned the right to call Gil friend. One is Egar, the Dragonbane, a fierce Majak fighter who comes to respect a heart as savage and loyal as his own. Another is Archeth, the last remaining daughter of an otherworldly race called the Kiriath, who once used their advanced technology to save the world from the dark magic of the Aldrain—only to depart for reasons as mysterious as their arrival. Yet even Egar and Archeth have learned to fear the doom that clings to their friend like a grim shadow . . . or the curse of a bitter god.

Now one of the Kiriath’s uncanny machine intelligences has fallen from orbit—with a message that humanity faces a grave new danger (or, rather, an ancient one): a creature called the Illwrack Changeling, a boy raised to manhood in the ghostly between-world realm of the Grey Places, home to the Aldrain. A human raised as one of them—and, some say, the lover of one of their greatest warriors—until, in a time lost to legend, he was vanquished. Wrapped in sorcerous slumber, hidden away on an island that drifts between this world and the Grey Places, the Illwrack Changeling is stirring. And when he wakes, the Aldrain will rally to him and return in force—this time without the Kiriath to stop them. 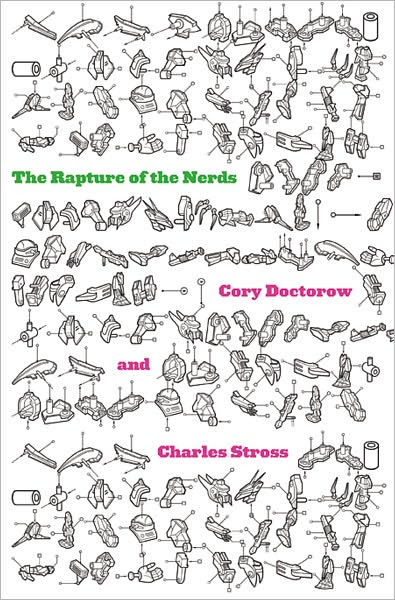 Rapture of the Nerds by Cory Doctorow and Charles Stross (Tor Hardcover 09/04/2012) – Two of SF/Tech geekdoms biggest names come together for a near future SF novel I’ve read a couple novels from each other and this one looks interesting.


Welcome to the fractured future, at the dusk of the twenty-first century.

Earth has a population of roughly a billion hominids. For the most part, they are happy with their lot, living in a preserve at the bottom of a gravity well. Those who are unhappy have emigrated, joining one or another of the swarming densethinker clades that fog the inner solar system with a dust of molecular machinery so thick that it obscures the sun.

The splintery metaconsciousness of the solar-system has largely sworn off its pre-post-human cousins dirtside, but its minds sometimes wander…and when that happens, it casually spams Earth's networks with plans for cataclysmically disruptive technologies that emulsify whole industries, cultures, and spiritual systems. A sane species would ignore these get-evolved-quick schemes, but there's always someone who'll take a bite from the forbidden apple.

So until the overminds bore of stirring Earth's anthill, there's Tech Jury Service: random humans, selected arbitrarily, charged with assessing dozens of new inventions and ruling on whether to let them loose. Young Huw, a technophobic, misanthropic Welshman, has been selected for the latest jury, a task he does his best to perform despite an itchy technovirus, the apathy of the proletariat, and a couple of truly awful moments on bathroom floors.

Email ThisBlogThis!Share to TwitterShare to FacebookShare to Pinterest
Labels: Books in the Mail, Del Rey, Tor