A Memory of Light and Captain Vorpatril's Alliance

Two reviews to mention today at SFFWorld, one from me and the other from Mark…

Seems as if my reviewing will be at a slower pace this year, because we are in the last week in January and I’m posting only my second book review to SFFWorld (my third overall this year). The book in question is probably one of the more polarizing novels that will be published in 2013 and I found two sides of my brain battling while reading the book and composing the review. Without further ado, here’s my review of A Memory of Light, the final Wheel of Time novel, 14th in main sequence and 15th overall:

A Memory of Light is one of the larger novels in the series, clocking in at just over 900 pages in hardcover and at times, unfortunately, the story feels every bit of those 900 pages. Like all prior Wheel of Time installments, this one begins with a prologue, in this case detailing the fall of Caemlyn, highlighting the heroics of Talmanes, the man who was given command of Mat’s Band of the Red Hand. The early portion of the novel is setting the table for Tarmon Gai’don as it is depicted in the chapter entitled “The Last Battle.” Where the novel succeeds the most, for me, is in the character beats for a many of the primary characters. Rand came across as believable, Egwene’s heroics were possibly the highlight of the novel for me, Perrin’s storyline was a bit drawn, Mat’s leadership abilities in battle were on full display and Lan’s scenes, especially his Crowning Moment of Awesome was just that, awesome.

Other elements, didn’t work so well, unfortunately. For all the build-up and tension surrounding the return of Moiraine in Towers of Midnight her presence in the final volume was minimal. "The Last Battle" chapter was vaunted prior to release for containing so many words (it is indeed large enough to be a novel unto itself) and so many view points, but ultimately I found it to be tedious. The battlefield movements and elements in this chapter paralleled, to a degree, Rand al’Thor’s more symbolic and metaphorical confrontation with the Dark One in Shayol Ghul. These more philosophical scenes, I found, worked better as a culmination of –some– of the themes of the series .

Mark caught up with the latest in one of his favorite SF series Captain Vorpatril's Alliance by Lois McMaster Bujold: 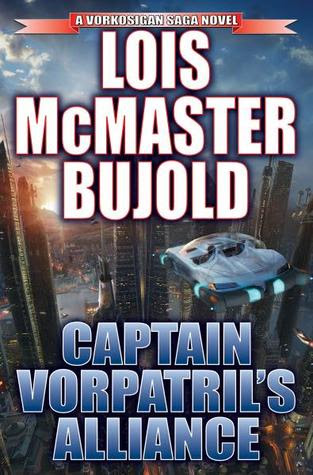 For those versed in the Vorkosigan series, we have come across the titular Captain Ivan Vorpatril before, mainly in Brothers in Arms (the hostage used to draw Miles out) and most recently in A Civil Campaign (with Lady Donna Vorrutyer, an ex-lover of Ivan, who becomes Dono). Ivan is second cousin to Imperial troubleshooter Miles Vorkosigan, often referred to in a joking way by Miles as “Ivan, you idiot!” In Captain Vorpatril’s Alliance, Ivan is generally happy with his relatively uneventful bachelor's life of a staff officer to a Barrayaran admiral. However, when asked by old friend Byerly Vorrutyer to investigate for Barrayaran Intelligence Tej, a young Jackson’s Whole refugee on a hitlist for a Komarrean crime syndicate, life gets complicated. Ivan finds himself actually held hostage by Tej and her companion Rish, and then finds out that they’re about to be assassinated. Further revelations show that Tej is actually Princess Akuti Tejaswini Jyoti ghem Estif Arqua, whose parents seem to have been killed as part of a coup on Jackson’s Whole.

This is a lively episode in the Saga. It’s all rather James Bond-ian, but with Lois’s intelligence and humour, both important elements of this series, the series seems regenerated. Because this is not focused on Miles, there seems to be a lot more going on, and Lois takes full advantage of the situation, with Ivan being able to do things that Miles can’t do. .