As I have in the past, I’ll start with some stats… I read (or at least attempted to read) 73 books in 2012, depending on how you count omnibus editions. I say attempted because a few books I simply dropped because nothing about the book compelled me to keep reading. Many of those, 40, were new/2012 releases, but I have been trying to get back into some of the older stuff and the fact that nearly half of what I read was pre-2012 means I did just that.

Aside from the regular gamut of current year releases, I did some major catching up with Robert Jordan’s Wheel of Time in the lead up to the January 2013 release of A Memory of Light.  I also read through a quite a few books by Daniel Abraham, including The Long Price Quartet in addition to this two 2012 releases.

Here are some stats:
All that said, on to the categories for the 2012 … which I think I'll call the Stuffies. As I said last year, this isn’t a typical top 10 or 12 or anything, but whatever you want to call them, here are some categories for what I read in 2011 and what I put at the top of those categories.

2012 was another strong year for Fantasy, with according to Locus Magazine, 215 Fantasy/Horror novels published in 2012. One thing I noticed, in addition to the debuts, was the number of novels which were second/third/etc. installments in ongoing series. This isn't rare, per say, rather the opposite.

With all of that having been said, as I've done in the past, I'll highlight the fantasy novels that stood out to me in 2012

The Troupe by Robert Jackson Bennett was not only the best fantasy novel I read in 2012, it is my favorite novel of the year, full stop. It was a powerful novel and I'd even rank it as one of the ten best I've read in the last decade: 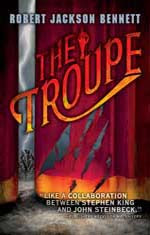 
Rounding out my top three is a novel from an author whose short stories I've read, but prior to this novel, never any of her novels. The novel is Range of Ghosts by Elizabeth Bear:

Other fantasies that really stood out to me were:

David Brin is a living legend in the genre, but I've read very little by him (maybe a short here and there and The Postman).  The novel he published in 2012; however, stands out as my favorite SF novel published in 2012, Existence:


Blackout is the final novel of The Newsflesh Trilogy, Mira Grant’s Zombie-Apocalypse trilogy. The second novel maintained the same tension and narrative power as the first and has set the bar high for the concluding volume. Here’s some of what I said about Blackout:

James S.A. Corey (AKA Daniel Abraham and Ty Franck) round out my top 3 SF books with Caliban's War,  the second installment of The Expanse:

Other SF books that really stood out to me were;

My favorite debut of the year was from Ace books (as it was last year), Myke Cole’s Control Point, the first installment in his Military Fantasy series Shadow OPS which logically posits that if magic were real, then the military would weaponize it, attempt to control, and to codify it:

Gwenda Bond is not unfamiliar to the genre crowd, she's written pieces for Publishers Weekly and Locus.  She's a terrific writer which is why Amanda Rutter and the folks behind the Strange Chemistry imprint were smart to maker her debut novel Blackwood the launch title for the imprint:

Rounding out my three stand out debut novels comes a novel from a writer who has made a name for himself  as a short story writer, Saladin Ahmed's Throne of the Crescent Moon:

I'll start off this section with an entire series, Daniel Abraham's Long Price Quartet, which published from 2006 to 2009 in single volumes and was re-released in 2012 in two omnibus volumes: 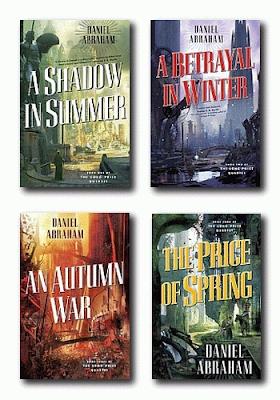 ...  So, taking a bit of a step away from the first volume, (in A Betrayal in Winter) Daniel Abraham gives readers what is essentially a fantastically infused murder mystery set in the imagined city of Machi. Though the events in the previous volume were indeed climactic, Abraham’s story illustrates how far ranging the consequences of one’s actions can be.  ...  Abraham jumps another fourteen years between books at the beginning of An Autumn War, Otah is entrenched in his role as ruler trying to keep his nation together. While Otah is busy ruling, Maati spends much of his time in the novel reflecting. Abraham provides a vantage point into the world outside of the cities where the andat have such an impact. ... Even though the first three volumes were intimate and personal in that Abraham’s dealings with characters focused on a relative few characters compared to his genre contemporaries, the stakes increased with each book. The personal aspect; however, is even more strong in The Price of Spring as the feel of the novel comes through Otah and Maati, once friends and allies who have become ideological enemies and are no longer in the same land.


George R.R. Martin makes an appearance on another one of my wrap-up posts, this time for  his classic vampire novel Fevre Dream: 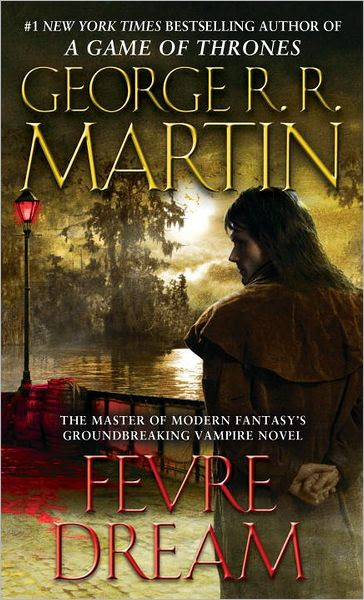 Six years earlier, Anne Rice published Interview with the Vampire and the superficial similarities between the two novels are hard to ignore – both take place in the south, with much of the action focused on a ‘gentleman vampire.’ One of the most fascinating elements to Rice’s Chronicles was the backstory/history of the vampires as a race. Martin does quite possibly a better job in one book with his vampires – we learn of the history of the vampire solely through Joshua’s voice. While this works to a large degree, I find it more successful than Rice’s history more for what is left unsaid and told for Rice left seemingly no stone unturned. A little bit of mystery is stronger than knowing the full scope in this case.


The final book here is Monster Hunter International by Larry Correia.  Sometimes a protagonist is a mirror image of the writer and it comes across as self indulgent or as the dreaded Gary Stu.  While some can say that about the protagonist Owen Pitt, for me, the novel was a blast and I could easily overlook such Gary Stu-ish qualities. I'm pleased that I've got the next two on my kindle in the omnibus edition waiting to be read:

I did a wrap up this earlier in the year and I can't really say much has changed since then so I'll a couple:

Rachel Aaron – I enjoyed the heck out of her The Legend of Eli Monpress omnibus, I've read the fourth in the series - The Spirit War and the fifth/final - Spirt’s End - awaits to be plucked off of Mount Toberead. These are fun, entertaining fantasies that I think would appeal to readers who enjoy Scott Lynch. 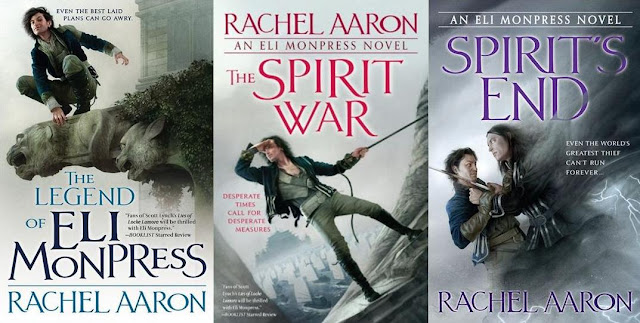 Jim C. Hines – I’ve only read one book by him, Libriomancer, but it really stood out to me.  Jim is a smart writer, has one of the best author blogs in the genre, and I've got a few books of his sitting along the slopes of Mount Toberead.

For the second year in a row, I have to give the nod to… 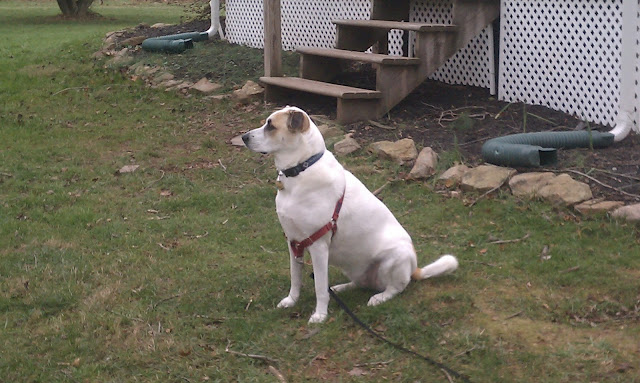 Another shot of Sully to close out the year as she ponders what's to come in 2013. Either that or she sees some deer.

Daniel Abraham, Mark Lawrence, and James S.A. Corey are all tops of my catch-up list for 2013. Seems like the TBR pile just keeps growing!

I just may have to look into that ebook omnibus edition of Monster Hunter International. I've got the hardcover omnibus, which looks great, but is about 3 inches thick!

Regarding MHI, the e-book version of the omnibus is available for $9.99. I picked it up for $6 before Baen signed their deal w/amazon and was selling a majority of their ebooks on their own web site for $6.

A very similar year to mine in many ways, Rob.

I have to thank you for a lot of great recommendations this year. As someone who is less of a hard core SF/f guys as a lot of the bloggers I follow, I always appreciate that I can get a good feel for the novel you are reviewing, and whether it would fit into my quirky likes and dislikes. Without your review, I probably wouldn't have tried The Troupe, and I'm glad I did. Also, you created an excitement for titles like Control Point and Throne, both of which ended up being some of my favorites of the year.

Thanks for the kind note and I'm pleased that you picked up those three books on my recommendation/reviews.

What can I say, if I like a book I want to shout about it and make sure other folks enjoy the book/books, too! (or really anything I like, such as movies, beer, food, etc)

I completely agree about The Troupe. I became an instant Robert Jackson Bennett fan.