The batch of arrivals is even bigger this week now that 2013 is in full swing. Have a look, won’t you? 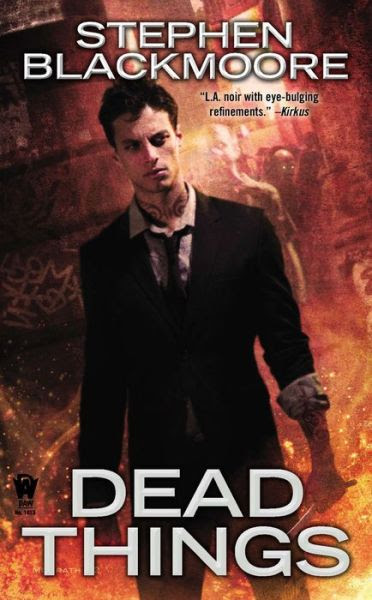 Dead Things by Stephen Blackmore (DAW, Mass Market Paperback 02/05/2013) – Second novel in two years from Blackmore and refreshingly, this seems to be a stand-alone, or at least not blatantly to his first novel.

Necromancer is such an ugly word, but it's a title Eric Carter is stuck with.

He sees ghosts, talks to the dead. He's turned it into a lucrative career putting troublesome spirits to rest, sometimes taking on even more dangerous things. For a fee, of course.

When he left LA fifteen years ago, he thought he'd never go back. Too many bad memories. Too many people trying to kill him.

But now his sister's been brutally murdered and Carter wants to find out why.

Was it the gangster looking to settle a score? The ghost of a mage he killed the night he left town? Maybe it's the patrion saint of violent death herself, Santa Muerte, who's taken an unusually keen interest in him.

Carter's going to find out who did it, and he's going to make them pay. 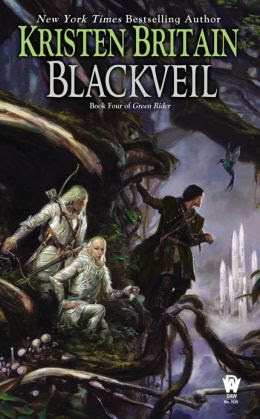 First Rider's Call (Green Rider #4) by Kristen Britain (DAW Mass Market Paperback 02/15/2013) – I read the first book, Green Rider in this series years ago, and I think I read book two in hardcover release. This is the fourth and (presumably?) final novel in the sequence?

Read Kristen Britain's blogs and other content on the Penguin Community.

Once a simple student, Karigan G'ladheon finds herself in a world of deadly danger and complex magic, compelled by forces she cannot understand when she becomes a legendary Green Rider-one of the magical messengers of the king. Forced by magic to accept a dangerous fate she would never have chosen, headstrong Karigan has become completely devoted to the king and her fellow Riders.

But now, an insurrection led by dark magicians threatens to break the boundaries of ancient, evil Blackveil Forest-releasing powerful dark magics that have been shut away for a millennium. The Red Knight (Book 1 of The Traitor Son Cycle #1) by Miles Cameron (Orbit (Hardcover 01/22/2013) – This one’s getting quite a bit of pre-publication buzz. This seems to be RIGHT up my alley. This is the published/final version of the ARC I received in November, and since then, Mark reviewed it enthusiastically for SFFWorld.

Twenty eight florins a month is a huge price to pay, for a man to stand between you and the Wild.

Twenty eight florins a month is nowhere near enough when a wyvern's jaws snap shut on your helmet in the hot stink of battle, and the beast starts to rip the head from your shoulders. But if standing and fighting is hard, leading a company of men - or worse, a company of mercenaries - against the smart, deadly creatures of the Wild is even harder.

It takes all the advantages of birth, training, and the luck of the devil to do it.

The Red Knight has all three, he has youth on his side, and he's determined to turn a profit. So when he hires his company out to protect an Abbess and her nunnery, it's just another job. The abby is rich, the nuns are pretty and the monster preying on them is nothing he can't deal with. 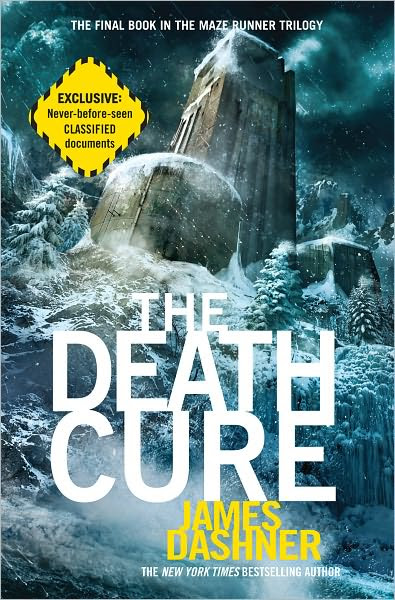 The Death Cure (Maze Runner Series #3) by James Dashner (Random House Teens Trade Paperback 01/08/2013) – Final book of a trilogy (and the only book of the series I’ve received) and reissue of the hardcover I received a little over a year ago. The dystopian series seems well-received and will likely appeal to readers/fans of The Hunger Games.

Thomas knows that Wicked can't be trusted, but they say the time for lies is over, that they've collected all they can from the Trials and now must rely on the Gladers, with full memories restored, to help them with their ultimate mission. It's up to the Gladers to complete the blueprint for the cure to the Flare with a final voluntary test. What Wicked doesn't know is that something's happened that no Trial or Variable could have foreseen. Thomas has remembered far more than they think. And he knows that he can't believe a word of what Wicked says.

The time for lies is over. But the truth is more dangerous than Thomas could ever imagine.

Will anyone survive the Death Cure? 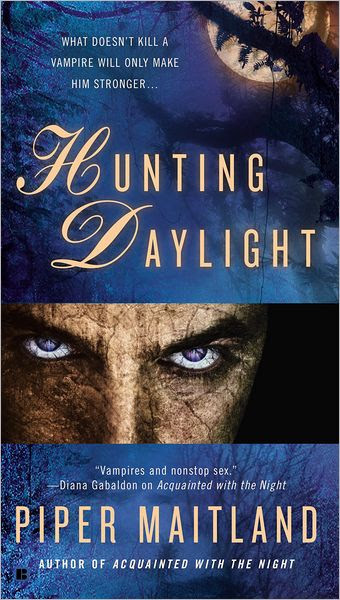 Hunting Daylight (The Night #2) by Piper Maitland (Berkeley, Mass Market Paperback 02/05/2013) – Second book of a paranormal romance series (and the only book of the series I’ve received) featuring vampires

Out of the shadows…

For more than a decade, Caro Barrett has had doubts about the death of her husband, who disappeared while looking for a tribe of day-walking vampires in an African rainforest. Now, their daughter is struggling through her teenage years without a father. Waiting in the wings is an ancient vampire ready to possess Caro’s heart—and to protect them both from harm. And, with her husband declared legally dead, Caro feels it is finally time to move on…

A hemisphere away in a windowless compound, an Ottoman vampire lies dying from a rare blood disease, which has made him vulnerable to the faintest bit of light. Yet he is determined to vanquish its power over him—to feel the sun on his face one last time. And in Caro’s darkest fears he will be lifted into the light of day… 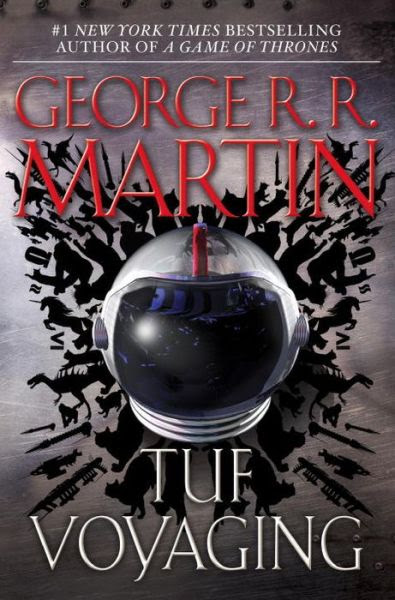 Tuf Voyaging by George R.R. Martin (Bantam Spectra, Trade Paperback Reissue 01/29/2013) – I think this is the final of the re-issues of GRRM’s backlist and probably the one (now that Fevre Dream was re-released) I’ve most wanted to read.

Long before A Game of Thrones became an international phenomenon, #1 New York Times bestselling author George R. R. Martin had taken his loyal readers across the cosmos. Now back in print after almost ten years, Tuf Voyaging is the story of quirky and endearing Haviland Tuf, an unlikely hero just trying to do right by the galaxy, one planet at a time.

Haviland Tuf is an honest space-trader who likes cats. So how is it that, in competition with the worst villains the universe has to offer, he’s become the proud owner of a seedship, the last remnant of Earth’s legendary Ecological Engineering Corps? Never mind; just be thankful that the most powerful weapon in human space is in good hands—hands which now have the godlike ability to control the genetic material of thousands of outlandish creatures.

Armed with this unique equipment, Tuf is set to tackle the problems that human settlers have created in colonizing far-flung worlds: hosts of hostile monsters, a population hooked on procreation, a dictator who unleashes plagues to get his own way . . . and in every case, the only thing that stands between the colonists and disaster is Tuf’s ingenuity—and his reputation as a man of integrity in a universe of rogues.

Imager's Battalion (Imager Portfolio) by L.E. Modesitt, Jr. (Tor Hardcover 01/22/2013) – The writing machine that is a man releases another (sixth overall) in this series and sequel to last May’s Princeps

The sequel to the New York Times bestselling Princeps follows magical hero Quaeryt as he leads history's first Imager fighting force into war. Given the rank of subcommander by his wife's brother, Lord Bhayar, the ruler of Telaryn, Quaeryt joins an invading army into the hostile land of Bovaria, in retaliation for Bovaria's attempted annexation of Telaryn. But Quaeryt has his own agenda in doing Bhayar's bidding: to legitimize Imagers in the hearts and minds of all men, by demonstrating their value as heroes as he leads his battalion into one costly battle after another.

Making matters worse, court intrigues pursue Quaeryt even to the front lines of the conflict, as the Imager's enemies continue to plot against him. The Silent Dragon (The Children of the Dragon Nimbus #1) by Irene Radford (DAW Mass Market Paperback 02/05/2013) – Radford returns to her longest and most well-known series with this novel.

In a realm on the brink of war, will an unsuspected heir to the kingdom of Coronnan and to magic long-banished from the land offer the only hope for survival?

Glenndon—son of witchwoman Brevelan and Jaylor, Senior Magician and Chancellor of the University of Magicians—has never spoken aloud. He has no need because his telepathic talent is strong and everyone associated with the University can "hear" him. He can throw master-level spells, but because he will not speak, Jaylor has refused to promote him from apprentice to journeyman magician. Still, everyone knows it is only a matter of time until Glenndon will take his rightful place at the University.

Then an urgent missive arrives from King Darville. The Council of Provinces is near rebellion over the king's lack of a male heir. Rather than see his fourteen-year-old daughter, Rosselinda, married off just to procure an heir, he orders his illegitimate son Glenndon to Coronnan City to become his successor. And suddenly Glenndon's world is in chaos. The man he's always known as his father is not. Instead he is the son of the king. But in this city where court politics can prove deadly and where magic is forbidden, the young man must hide his talents even as he struggles to find his voice and his destiny.

And one slip could see Glenndon, Darville, Rosselinda, and even Jaylor doomed, for the lords and the people fear magic more than potential invasion, legendary monsters, and civil war. 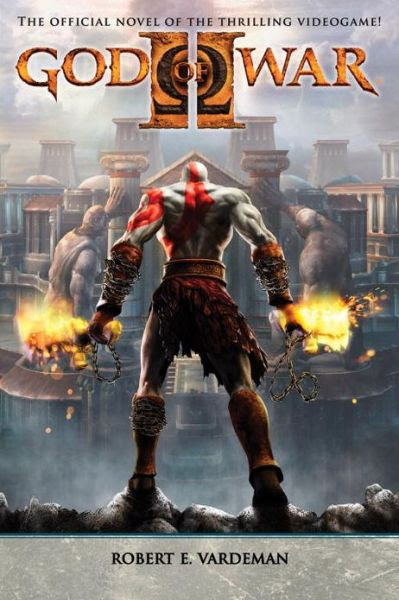 God of War II> by Robert Vardeman (Del Rey Hardcover 02/12/2013) – Second novel based on one of the greatest video game franchises of all time. What’s odd here is that God of War III is already nearly 3 years old and this is just the second book.

All the majesty and mayhem of Greek mythology springs to life once more in the powerful second novel based on the bestselling and critically acclaimed God of War® franchise.

Once the mighty warrior Kratos was a slave to the gods, bound to do their savage bidding. After destroying Ares, the God of War, Kratos was granted his freedom by Zeus—and even given the ousted god’s throne on Olympus.

But the other gods of the pantheon didn’t take kindly to Kratos’s ascension and, in turn, conspired against him. Banished, Kratos must ally himself with the despised Titans, ancient enemies of the Olympians, in order to take revenge and silence the nightmares that haunt him.

God of War II takes the videogame’s action to electrifying new heights, and adds ever more fascinating layers to the larger-than-life tale of Kratos.