Another pair of reviews from the usual suspects, (Mark and I), Mark reviews a US author’s book reaching UK shores after success here in the US and I review a UK author’s debut.

On tap for Mark is the first book in a Military Science Fiction series whose fifth book I reviewed a couple of years ago, Steven L. Kent’s The Clone Republic:

It is the year 2508AD. The Unified Authority rules over the galaxy, using clones for much of its policing across the colonies. The story is told from the perspective of one of these clones, Private First-Class Wayson Harris, initially newly assigned to the small and obscure desert outpost of Gobi on a planet called Ravenwood. As a clone, he’s trained to obey without question, and clearly finds the rather laidback setup at Gobi disconcerting.

Part of this attraction may be that initially, for all intents and purposes, the book doesn’t stray too far from the tried and trusted model for military stories. The Marines of 2508 pretty much act and talk like soldiers in 2013. What happens here on a desert-type world in 2508 is very similar to, say, Iraq, Iran or Afghanistan in 2013, a point further emphasized when some of the hardware used has familiar names such as Harrier and Tomahawk which could place the book as easily in the 1980’s as the 2500’s. This reminds the reader that a Marine is a Marine, regardless of time, and nothing really changes that, whether now or in the future. Here they complain, gamble, sleep around and fight one another like any other typical armed force, past, present and (presumably) future.

I take a look at Fade to Black, Francis Knight’s debut novel and the launch of her Rojan Dizon Urban/Dark Fantasy series: 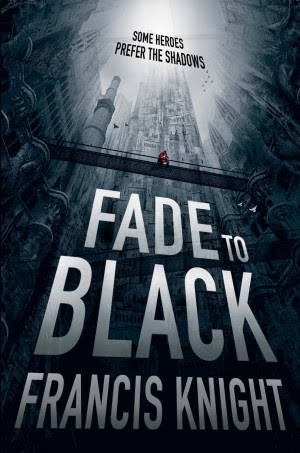 Fade to Black has been categorized as an urban fantasy, but by no means is this the tramp-stamp, sexy magic version of the sub-genre. Rather, this is Urban Fantasy where the city is as much of a character as the people themselves, a novel with more similarities to China Mieville’s King Rat and Neil Gaiman’s Neverwhere. The protagonist, Rojan Dizon, in addition to being a people finder/bounty hunter, is a pain mage. By inflicting pain unto himself, Dizon is able to locate his quarry more easily; find the proverbial needle in the haystack..

Mahala…a dark sprawling city with layers upon layers of grit and darkness, not exactly the streets of Chicago, Atlanta, or New York. Ruled by the Ministry, perhaps in an allusion to Orwell’s 1984, there’s a great sense of claustrophobia throughout the entire novel. There seems to be nowhere to hide and the characters who inhabit this world, particularly Rojan, have no privacy. There’s a mixed feel of potentially dark future with a hint of pre-industrial city – guns are relatively new, the city is powered by magic, yet the class structure to me felt more modern, something out of a film like American Psycho or even Wall Street. The city itself reminded me a bit of the towering metropolis of Alastair Reynolds’ Terminal World and the dark city of John Meany’s Bone Song, or on the film front the rainy, unnamed city of the film Seven. I also felt a strong resonance with Richard Morgan’s fiction, both his SF and fantasy novels.