Retro Review: The Eyes of God by John Marco

This is the first of a series of older reviews I wrote and posted to SFFWorld that I’ll be re-posting here on my blog in my effort (as I said the soft re-boot post) to have a more centralized location for my reviews and ramblings and to also make this blog more than "Rob's Blog O' Stuff I Got Sent." Also, this review in particular is the first of three reviews of John Marco’s Bronze Knight Chronicles I’ll be posting leading up to my review of his latest (April 2013) novel featuring Lukien, The Forever Knight.

I wrote this review over a decade ago, in 2002, when The Eyes of God first published. It was John Marco’s first hardcover release and introduction to the character of Lukien the Bronze Knight.

Also of particular note, the beautiful character-study of a cover was created by the late Keith Parkinson in one of the last pieces of art he created.

So, here’s what I had to say about a dozen years ago, slightly edited. I’ve not changed too much, but it is interesting (for me at least) to see where I was as a book review then and how I write them now (hint, I got better): 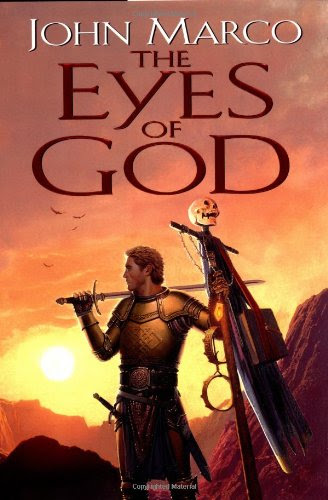 Buy this book and read it. There, that’s why you’re really reading this review right? Well you probably want to know why you should read this book. The characters are believable, the world and nations are mirrors of those in our own world. And magic, what would a great secondary-world fantasy novel be without a dose of magic? There’s that too, don’t worry.

Marco has created a world of wondrous lands such as the kingdom of Liira, the distant land of Jador and the magical land of Grimhold, home to the Inhumans, a group of strange people, each with their own special knack or ability. Add to this the shining Bronze Knight Lukien, his king Akeela, the magical Eyes of God and Devil’s Armor and you have some very key ingredients necessary for a secondary-world Fantasy novel.

From the opening sentence “He was a giant,” Marco immediately gives this novel a a sense of epic proportion. At the end of the almost 800 pages of this book, you will feel as if you’ve lived the triumphs of the Inhumans, the tragedies of Akeela, in the lands of Jador and the complexities of Lukien’s many choices. As big as this book is, every word, scene and word spoken by the characters is essential and necessary.

The novel begins with the end of a quest which is where many a story or novel ends. In The Eyes of God, we see what can happen AFTER the journey, when what characters quested after is achieved. To a great extent, Marco shows that the end of the quest is not the answer for which Lukien was searching, his life doesn’t exactly get easier once he secured that for which he sought. The answers get harder to find because the questions change.

The relationship between Akeela and Lukien is a strong one, as are many relationships with powerful, life-long bonds, whether they are on the same side or opposing sides. Raised almost as brothers, their friendship is perhaps the strongest and most defining aspect of this novel.

It was easy to empathize, almost sympathize, with even the character’s most despicable acts. Marco sets up so many events you expect to happen, only to twist your expectations into something better. None of these characters are defined by “good” or “evil,” rather by their strongest beliefs and reaching what they feel is the right thing.

There were little things that Marco sprinkled throughout the story that added significance, just a few words while he was putting you in the heads of various characters. There is resonance of Arthur in Akeela, Lancelot in Lukien and Guinevere in Cassandra and of course Camelot a bit in Liira.

John Marco progressively gets better with each book he writes. There are some things in The Eyes of God that will remind you of his previous work, The Tyrants and Kings Trilogy, yet there is so much new and alive in this book.

With excellent characters, a gripping believable story and a world that comes alive off the pages, Marco has created an engaging and enjoyable fantasy novel. Ultimately this novel worked because I couldn't stop turning the pages and HAD to find out what was going to happen next.
at 3/25/2013

Sorry, I don't know what's going on, I thought I double-posted and then I deleted the one and then it's all deleted. If this goes up twice, I'm not touching it, sorry. :)

Agree with your review and loving The Devil's Armor right now.