Campbell and Crompton Reviewed at SFFWorld

Two weeks in a row for new reviews? Say it ain’t so! Seriously, I catch up with a late 2012 SF release and Mark reviews a book that provides a somewhat depressing snapshot of the UK’s most important and renowned comic artists.
I’ve been enjoying Jack Campbell’s Military SF/Space Opera hybrid novels set in The Lost Fleet universe for a couple of years now. He turns the tables a bit with The Lost Stars the series which kicks off with  Tarnished Knight  and takes a look at the "other side" of the war depicted in The Lost Fleet. 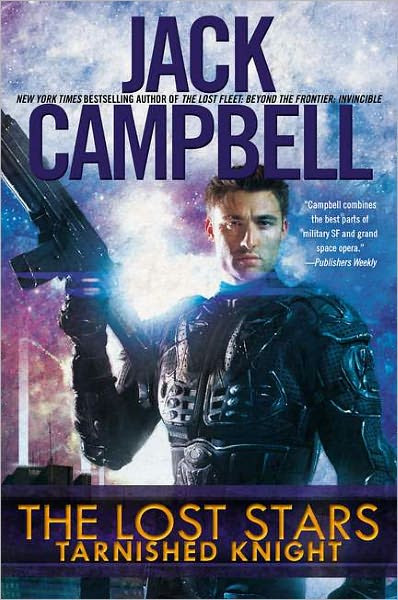 The narrative focuses on two individuals who form an uneasy alliance at the outset of the novel. Reeling from the defeat at the hands of the Alliance and “Black Jack” Geary, Artur Drakon and Gwen Iceni, once CEOs in the Syndicate hierarchy, must find a way to trust each other and rebuild their broken government. In addition to trying to recover from such a serious blow to their worldview and egos, Iceni and Drakon must quell any uprisings on Syndicate ruled worlds, while deflecting their Internal Services group – arguably the most powerful governmental organization in the Syndicate – as they rebuild their government.

The Tarnished Knight is a fine enough starting place for readers unfamiliar with Campbell’s Lost Fleet novels, for it can easily be read as a story about the issues surrounding post-war rebuilding on the side of the defeated. Campbell alludes to enough of what he’s created in this milieu not to exclude the newer readers. On the negative side, Iceni and Drakon, continually repeat how they must “do things differently than in the past, the Syndicate failed” both in their internal dialogue and to each other and other characters to the point where I was saying to myself “OK, I get it, we all get it.”

Alastair Crompton’s Frank Hampson: Tomorrow Revisited is a retrospective of the popular comic artist. Here’s part of what Mark had to say:

Though not a name many know well these days, his work in the 1950’s until the 1970’s, in particular in the UK, was instantly recognisable and iconic. Although Frank drew Westerns, adventure stories and even Biblical tales, it is his drawings of Dan Dare for the Eagle comic that set a phenomenally high standard, influencing contemporary artists such as Dave Gibbons, Graham Bleathman and Chris Foss. The first edition of the Eagle comic, published on the 14th April 1950, sold a previously unheard of number of copies – widely recognised to be about 900 000 – when comics in the UK typically sold less than 100 000 in a very good week* – and Hampson’s front page spread of Dan Dare, in colour, was seen to be a key factor in the comic’s continued success for the next twenty years. At its peak the Eagle has been estimated to have sold around one million copies a week.

In his engagingly honest Introduction Alastair explains his take on the issue and tries to keep things as even-handed and as accurate as possible through presenting many interviews and transcripts from details at the time. With rare photos and interviews throughout, the book shows what an innovative and inspirational place the offices of the Eagle must have been in the 1950’s and 60’s, although ultimately relentless and unforgiving.