Ariel and The Bookman reviewed at SFFWorld

Ace Books re-released a cult-classic genre novel in August of last year, Ariel by Steven R. Boyett. The novel has some genre famous fans like John Scalzi and Cory Doctorow and I now consider myself a fan of the book. It is the first book review I posted to SFFWorld this year. 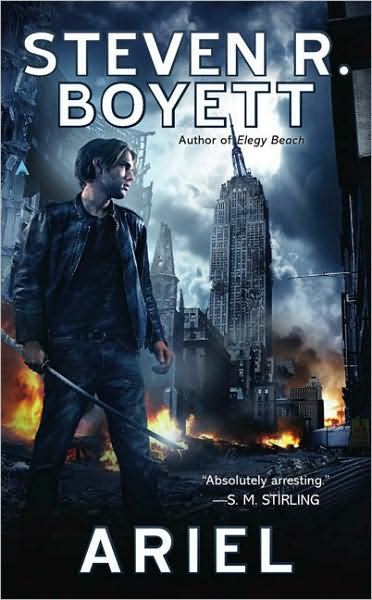 Boyett quickly avoids some of the fluffy cutesy cliché associated with unicorns when Ariel begins to speak and mouth-off back to Pete. The bond between the two is more than that of a mage and a familiar, it is an intimate bond that might even border on that of star-crossed lovers. This description sounds trite, I admit and even writing it does as well. However, Boyett’s skill in evoking the feelings between Ariel and Pete is wonderfully rendered.
.
.
.
Little, rather no explanation is given to the reason behind the Change. It just happened and though it may have been interesting to find out the why, Ariel is a stronger novel because no explanation is given. Perhaps because I recently finished it, I couldn’t help but draw mental comparisons between Ariel and Cormac McCarthy’s masterpiece The Road. Stylistically both novels couldn’t be more different, but the sense of ruin and the dangers of a decay of civilization they both illicit in the feel of the world as seen through their characters is similar.

Another recent review is Bridie Roman's review of The Bookman by Lavie Tidhar. Tidhar is doing a Q & A at SFFWorld for the next week or so. Here’s a blurb from Bridie’s review

This is a steampunk gem. The settings are marvellously detailed, giving you the feeling that there is a London in which Lizards reign and whales swim up the Thames to sing lullabies to the city dwellers. The technology is mystical yet mechanical, blending souls and machines into a fascinating mix that would spark one hell of a debate between philosophers. The society itself, in which poets and writers are revered, is pretty cool too, as you keep reading certain names often pop up that make you go “Hey! I’ve heard that somewhere!” Names dropped include Prime Minister Moriarty, Byron the Automaton and Captain Nemo. This particular feature of the book was fun and made much of it seem like an “in” joke. The plot itself was interesting, fast paced and diverse. One minute Orphan is being abducted, the next he is a pirate on a ship. I felt the pace was a bit too rushed, as though Lavie was trying to cram a big book into fewer pages. A lot of explanation was left out in favour of intrigue and descriptions of how Orphan is feeling. I often had a feeling that everyone in the book knew more and that nothing was being fully explained to me, however I let my imagination run wild and that filled the gaps for me, if a little insufficiently.