Over the past week, we’ve posted two new reviews at SFFWorld. One of which is a much-discussed Epic Fantasy debut while the other is the concluding volume of a popular and enjoyable Military Science Fiction saga.

I think part of the problem, for me, is that the book tended to fall between the two potentially interested parties. Some books, like, say Raymond Feist’s Magician or Terry Brooks’ Sword of Shannara can be happily read by teens and adults alike. However, in places, the book felt as if it might be rather perplexing for younger readers. Hoffman drops readers into the narrative rather like Steven Erikson’s Malazan series, without explanation and yet for adults, especially those who’ve read a bit of the genre, the books may not be complex enough. For them the tale may be too obvious, the evolution of the characters too clumsy and uneven, the dénouement predictable. It is undemanding, though entertaining.

The first part of the book takes a little while to get going but settles the reader in. It tells of Thomas Cale, a mistreated teen incarcerated in a world where children are sent off as slaves to be trained by the religious Redeemers. As a young adult tale, the significance of this is laid out clearly from the outset. Like many a morality tale the idea of ‘bad religion’ is signaled loud and clear, with a great dollop of Catholic guilt. The first section tells us over and over that Religion is dreadful, punishments are harsh, misery seemingly unending, litanies recited without understanding or merit.

The book I reviewed was Orphan’s Triumph by Robert Buettner, the final book in his highly engrossing and entertaining Jason Wander series. I’ve had the book for quite a while (after sort of asking for a copy from the publisher, sorry guys!) and finally popped it open about a week and a half ago. 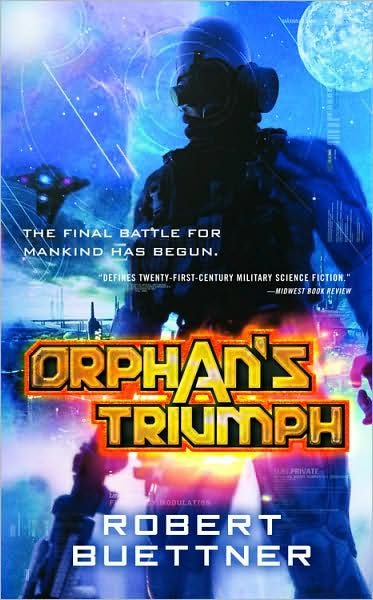 Buettner picks up the action straight away. Jason is not only contending with the Slugs and a way to stop them, but the various political borders between the inhabited worlds of the Human Alliance. One of Wander’s closest friends, and one might even say his sidekick throughout the entire series, may have come up with a solution to the Slug problem. One of the moon’s surrounding a human-inhabited planet is basically kryptonite to the Slugs and Hibble plans a gambit that will launch pieces of it to the recently discovered Slug homeworld.

As I’ve said in previous reviews, very often, the overall quality of a series rests on the shoulders of its concluding volume. The same can be said of Buettner’s Jason Wander saga, but with the caveat that he’d been doing pretty well since the previous volumes were balanced, entertaining and good examples of Science Fiction. The journey Jason is put on by Buettner is enjoyable, emotional and genuine.