An interesting mix this week, including one Science Fiction novel I’ve been really looking forward to reading.

Shadowline Volume One of The Starfishers Trilogy by Glen Cook (Night Shade Books, Trade Paperback 01/19/2010) – Night Shade continues to re-issue program Glen Cook’s backlist in these attractive trade paperbacks. I’ve a feeling I’ll be reading quite a bit of Glen Cook this year and since I’ve hankering for SF with a Space Opera feel.

The vendetta in space had started centuries before "Mouse" Storm was born with his grandfather's raid on the planet Prefactlas, the blood bath that freed the human slaves from their Sangaree masters. But one Sangaree survived - the young Norborn heir, the man who swore vengeance on the Storm family and their soldiers, in a carefully mapped plot that would take generations to fulfill. Now Mouse's father Gneaus must fight for an El Dorado of wealth on the burning half of the planet Blackworld. As the great private armies of all space clash on the narrow Shadowline that divides inferno from life-sheltering shade, Gneaus' half- brother Michael plays his traitorous games, and a man called Death pulls the deadly strings that threaten to entrap them all - as the Starfishers Trilogy begins.

Tails of Wonder and Imagination by Ellen Datlow (Night Shade Books Trade Paperback 2/16/2010) – Ellen Datlow is a legendary editor and this volume contains 40 stories about cats from an impressive .

What is it about the cat that captivates the creative imagination? No other creature has inspired so many authors to take pen to page. Mystery, horror, science fiction, and fantasy stories have all been written about cats.

Dust of Dreams (A Tale of the Malazan Book of the Fallen) by Steven Erikson (Tor Hardcover 01/26/2010) – I received a copy of this from the UK publisher mid-September, this is the Tor version. As I said then, Owen (aka kater) reviewed Dust of Dreams for SFFWorld.

In war everyone loses. This brutal truth can be seen in the eyes of every soldier in every world…

In Letherii, the exiled Malazan army commanded by Adjunct Tavore begins its march into the eastern Wastelands, to fight for an unknown cause against an enemy it has never seen.

And in these same Wastelands, others gather to confront their destinies. The warlike Barghast, thwarted in their vengeance against the Tiste Edur, seek new enemies beyond the border and Onos Toolan, once immortal T’lan Imass now mortal commander of the White Face clan, faces insurrection. To the south, the Perish Grey Helms parlay passage through the treacherous kingdom of Bolkando. Their intention is to rendezvous with the Bonehunters but their vow of allegiance to the Malazans will be sorely tested. And ancient enclaves of an Elder Race are in search of salvation—not among their own kind, but among humans—as an old enemy draws ever closer to the last surviving bastion of the K’Chain Che’Malle.

So this last great army of the Malazan Empire is resolved to make one final defiant, heroic stand in the name of redemption. But can deeds be heroic when there is no one to witness them? And can that which is not witnessed forever change the world? Destines are rarely simple, truths never clear but one certainty is that time is on no one’s side. For the Deck of Dragons has been read, unleashing a dread power that none can comprehend…

In a faraway land and beneath indifferent skies, the final chapter of ‘The Malazan Book of the Fallen’ hasbegun… 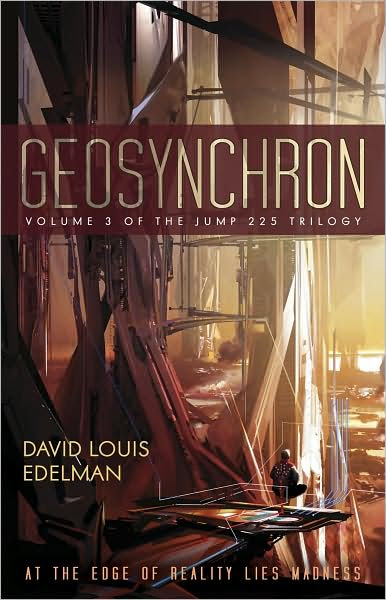 Geosynchron (Book Three of The Jump 225 Trilogy #1) by David Louis Edelman (Pyr Trade Paperback 02/02/2009) – I really enjoyed the first two novels in Edelman’s debut trilogy (Infoquake and Multireal) so I was really looking forward t reading this book in the hopes that Mr. Edelman does deliver on the promises of the first two books.
DAVID LOUIS EDELMAN'S BUSINESS SCIENCE FICTION SAGA THAT BEGAN WITH INFOQUAKE AND MULTIREAL COMES TO A STUNNING CONCLUSION WITH GEOSYNCHRON, THE LAST BOOK OF THE JUMP 225 TRILOGY.

The Defense and Wellness Council is enmeshed in full-scale civil war between Len Borda and the mysterious Magan Kai Lee. Quell has escaped from prison and is stirring up rebellion in the Islands with the aid of a brash young leader named Josiah. Jara and the apprentices of the Surina/Natch MultiReal Fiefcorp still find themselves fighting off legal attacks from their competitors and from Margaret Surina's unscrupulous heirs — even though MultiReal has completely vanished.

The quest for the truth will lead to the edges of civilization, from the tumultuous society of the Pacific Islands to the lawless orbital colony of 49th Heaven; and through the deeps of time, from the hidden agenda of the Surina family to the real truth behind the Autonomous Revolt that devastated humanity hundreds of years ago.

Meanwhile, Natch has awakened in a windowless prison with nothing but a haze of memory to clue him in as to how he got there. He's still receiving strange hallucinatory messages from Margaret Surina and the nature of reality is buckling all around him. When the smoke clears, Natch must make the ultimate decision — whether to save a world that has scorned and discarded him, or to save the only person he has ever loved: himself. 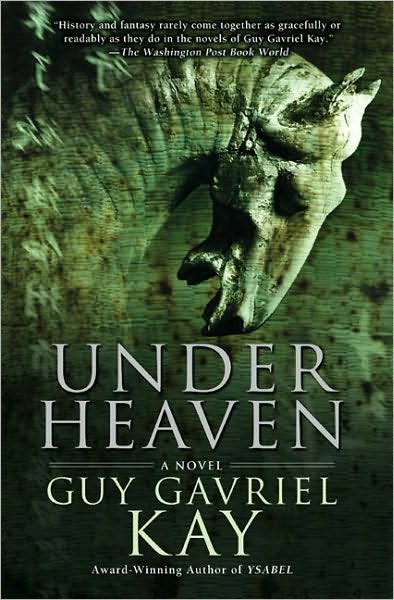 Under Heaven by Guy Gavriel Kay (Roc, Hardcover 04/27/2010) – Kay is a magnificent writer, I’ve read about 1/3 to ½ of what he’s written and I wasn’t disappointed by any of it. This will be his first novel since the World Fantasy Award winning Ysabel

Shen Tai is the son of a general who led the forces of imperial Kitai in the empire’s last great war against its western enemies, twenty years before. Forty thousand men, on both sides, were slain by a remote mountain lake. General Shen Gao himself has died recently, having spoken to his son in later years about his sadness in the matter of this terrible battle.

To honour his father’s memory, Tai spends two years in official mourning alone at the battle site by the blue waters of Kuala Nor. Each day he digs graves in hard ground to bury the bones of the dead. At night he can hear the ghosts moan and stir, terrifying voices of anger and lament. Sometimes he realizes that a given voice has ceased its crying, and he knows that is one he has laid to rest.

The dead by the lake are equally Kitan and their Taguran foes; there is no way to tell the bones apart, and he buries them all with honour.

It is during a routine supply visit led by a Taguran officer who has reluctantly come to befriend him that Tai learns that others, much more powerful, have taken note of his vigil. The White Jade Princess Cheng-wan, 17th daughter of the Emperor of Kitai, presents him with two hundred and fifty Sardian horses. They are being given in royal recognition of his courage and piety, and the honour he has done the dead.

You gave a man one of the famed Sardian horses to reward him greatly. You gave him four or five to exalt him above his fellows, propel him towards rank, and earn him jealousy, possibly mortal jealousy. Two hundred and fifty is an unthinkable gift, a gift to overwhelm an emperor.

Tai is in deep waters. He needs to get himself back to court and his own emperor, alive. Riding the first of the Sardian horses, and bringing news of the rest, he starts east towards the glittering, dangerous capital of Kitai, and the Ta-Ming Palace – and gathers his wits for a return from solitude by a mountain lake to his own forever-altered life. 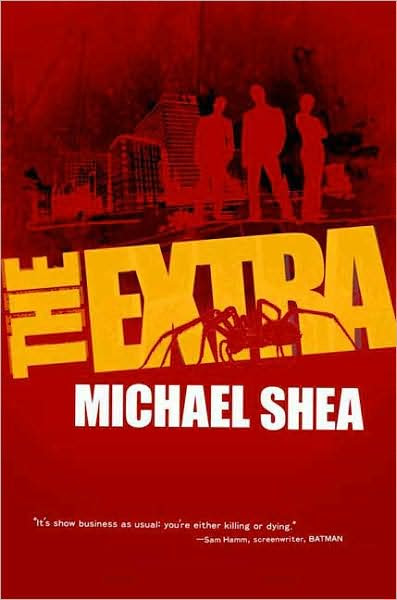 Books and films have skewered Hollywood's excesses, but none has ever portrayed one man's crazy vision of the future of big action/adventure films asThe Extra does. As over-the-top as Mel Brooks's Blazing Saddles, as savagely dark as Robert Altman's The Player, and more violent than Rollerball, this is the story of the ultimate, so-insane-it-could-only-happen-in-Hollywood formula for success, a brave new way to bring the ultimate in excitement to the silver screen. Producer Val Margolian has found the motherlode of box-office gold with his new "live-death" films whose villains are extremely sophisticated, electronically controlled mechanical monsters. To give these live-action disaster films greater realism, he employs huge casts of extras, in addition to the stars. The large number of extras is important, because very few of them will survive the shoot.

It's all perfectly legal, with training for the extras and long, detailed contracts indemnifying the film company against liability for the extras' injury or death. But why would anyone be crazy enough to risk his or her life to be an extra in such a potentially deadly situation?

The extras do it because if they survive they'll be paid handsomely, and they can make even more if they destroy any of the animatronic monsters trying to stomp, chew, fry, or otherwise kill them. If they earn enough, they can move out of the Zoo--the vast slum that most of L.A. has become. They're fighting for a chance at a reasonable life. But first, they have to survive . . .