Like many people, I become a fan of George R.R. Martin because of his A Song of Ice and Fire saga. Reading this led me to some of his back list Dying of the Light, Fevre Dream as well as his prodigious short-story output, many of which have been included in several reprint anthologies. Although A Song of Ice and Fire has garnered him his most recent, and perhaps highest profile acclaim, as many genre fans know he had a very good reputation prior to ASOIAF and was nominated many times in the past for his SF and short stories, and rightfully so.

As “Tales from the Spinner Rack,” his intro to Warriors, indicates he was always a comic book fan. This leads me to the past project he oversaw which I’d always wanted to catch-up with was his shared-world series Wild Cards. As a lifetime comic book fan, this series about superheroes seems a natural for me and Tor will be reissuing the series this November with Wild Cards I. Aidan posting the Tor Catalogue led me to the discover of the pending imprint, so kudos to him. 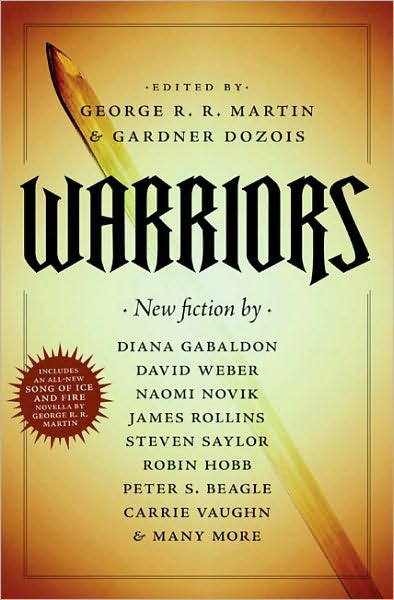 I’ve been listening to the Dragon Page podcasts for the better part of the past year and find the hosts, Michael A. Stackpole and Michael R. Mennenga. Their latest episode features…you guessed it George R.R. Martin. Not a lot of stuff new to people who have been keeping up with the various updates and discussions on the intarwebs, but a nice interview nonetheless.

Also in the catalogue is Out of the Dark , the expansion of David Weber’s short story from the aforementioned Warriors. I thought the story one of the strongest in the anthology and was pleased to learn it will be a novel and series. As I’ve mentioned before, I’ve been coming ‘round to David Weber in the past couple of years and this story was a lot of fun. His Honor Harrington series; on the other hand, is a bit daunting to jump into at 15+ volumes.

To circle back to Dragon Page, I’d highly recommend listening to their feature on David Weber
at 4/30/2010