Just one new review at SFFWorld this week - Watch by Robert J. Sawyer. While I enjoyed the book, it felt, I don’t know a bit thin. I remark on this in my review, but I get the sense that these three books really could have been one novel. 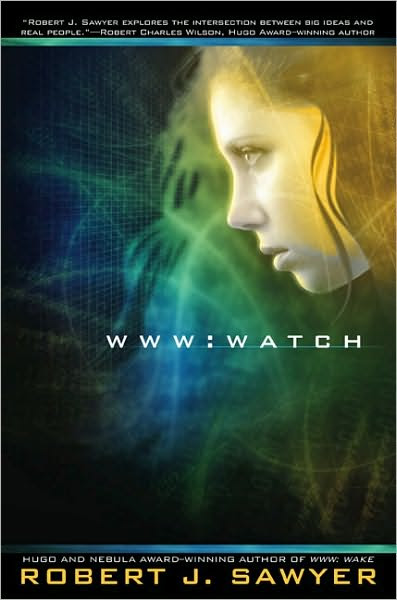 One narrative trick Sawyer plays in Watch is effective. The majority is told in a third person omniscient POV, while the remainder is from Webmind’s first person narrative. This provides more insight into the growing life form and Sawyer captured the alien-ness of Webmind fairly well. Having only humans after which to model himself, it’s only natural for the artificial intelligence to be somewhat humanistic.

There is something almost naïve about Webmind’s development as a sentient and intelligent being. To be guided by a young relatively well-adjusted girl whose parents are scientists is a bit too optimistic a thing for which to hope and impinges a bit on the story’s credibility – things are a bit too convenient.

This convenience is tempered by the aforementioned WATCH, whose basic mission statement is the responsibility of shutting down any artificial intelligence that evolves and develops. While this group makes attempts at ‘killing’ Webmind, they aren’t fast enough and decide at a point where Webmind can outpace their fail-safes and still survive despite their attempts.

I’ve been catching up with Tad Williams Shadowmarch saga over the past couple of weeks having finished Shadowplay last week and soon I’ll be starting Shadowrise. Although I read Dragons of Ordinary Farm the YA novel he wrote with his wife that I really enjoyed, the Shadowmarch saga is the type of grand, epic sweeping saga for which he is famous.