How to Begin a Definitive Epic

Yup, that sort of sums up some of the things that happen in the first 100 pages or so of A Game of Thrones. I'm in the midst of my third reading of the book and I'm loving it as much as the previous readings.

The cover below is the version of the book I'm reading, which is the first Mass Market Paperback published in 1997, when I first picked up the book because (I'm guessing) the awesome cover art with the direwolf Ghost on the back and that little blurb from Robert Jordan up top.

Soon after reading the book, well, actually when I bought the hardcover of A Clash of Kings, I saw a hardcover first edition of A Game of Thrones on the remainder shelf for like $6.99. Nice investment, huh? 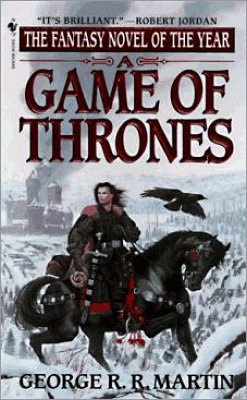 Just over a week remains until the Game begins.

Email ThisBlogThis!Share to TwitterShare to FacebookShare to Pinterest
Labels: A Song of Ice and Fire, Game of Thrones, George. R.R. Martin