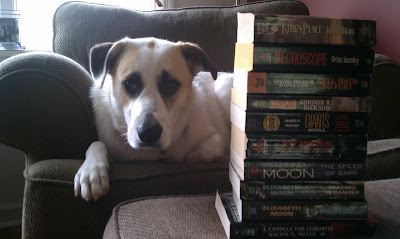 So, after a sizeable number mass market paperbacks have been sitting in my house unread (and/or with no intention of being read), I finally packed up a bunch and headed to the closest used book store, Half Price books. The pile above is what I brought home because my to-read pile isn’t big enough. The dog, Sully who turned a year old last week, seems non-plussed by the stack.

Here’s the rundown, from top to bottom:

The King’s Peace by Jo Walton – This is her debut novel and after being entranced by her latest Among Others (review forthcoming), I wanted to give another book by her a try. In part, she's to blame for this trip because the book is very much an homage to SF and books the character read throughout the novel, which takes place in 1979/1980.

Necroscope by Brian Lumley – I’d been wanting to read this book for a while, seems an interesting take on Vampires and among other people, a former colleague kept urging me to read it.

Hell Hath No Fury by David Weber & Linda Evans – As I may have recounted in previous posts, I’m becoming a fan of David Weber. Liviu at Fantasy Book Critic indicated this was a good book, I like the premise (a mix of fantasy and science fiction) so here it sits on the pile. Coincidentally, I started On Basilisk Station, the first of Weber’s Honor Harrington novels.

Dorsai! by Gordon R. Dickson – I’d been wanting to read some older foundational SF for a while. Dickson is a writer whose work seems to fit the bill.

The Giants Novels by James P. Hogan – This is an omnibus of Hogan’s first three Giants novels - Inherit the Stars, The Gentle Giants of Ganymede, and Giants' Star. This is sense-of-wonder SF and a series of books that have been on my radar since Hogan’s passing recently and is exactly the type of SF I’ve been wanting to read for a while. This book specifically is very tough to find.

The Boat of a Million Years by Poul Anderson – I’ve read a few of Anderson’s fantasy novels, Three Hearts and Three Lions, The Broken Sword, and The High Crusade and I’ve been wanting to read some of his SF for a while. Though one of his later works, it has an interesting premise and was nominated for the Nebula

The Speed of the Dark by Elizabeth Moon – Though I’ve only read one book by Moon (Oath of Fealty) I was impressed enough that I’m searching out her backlist. This was a Nebula Winner and Mark Yon liked it when he read it a couple of years ago

Trading in Danger and Moving Target by Elizabeth Moon – The first two books in Elizabeth’s recent Vatta’s War sequence. Again, I’ve a growing pile of her books to read.

A Canticle for Leibowitz by Walter M. Miller – When thinking of classics of SF, particularly Apocalyptic SF, it doesn’t get much more foundational than this one. Since I thoroughly enjoy the subgenre of Apocalyptic fiction, I’m somewhat embarrassed to not have read this book yet.

It's funny, just before I saw this post, I was talking to someone on Goodreads about how Among Others really inspired me to read some old sci-fi. Then I went to browse Abebooks for some out-of-print stuff. :)