I just posted my latest review at SFFWorld, which happens to be for the US release of Chris Wooding's awesome Retribution Falls. UK readers saw this book initially in 2009 and now Bantam Spectra will be releasing their version in about a week. In July, they'll be publishing the second book, Black Lung Captain and will hopefully time the 3rd book's release The Iron Jackal closely with the UK release.

Here's the usual excerpt of the review, with the cover linking to the review itself. 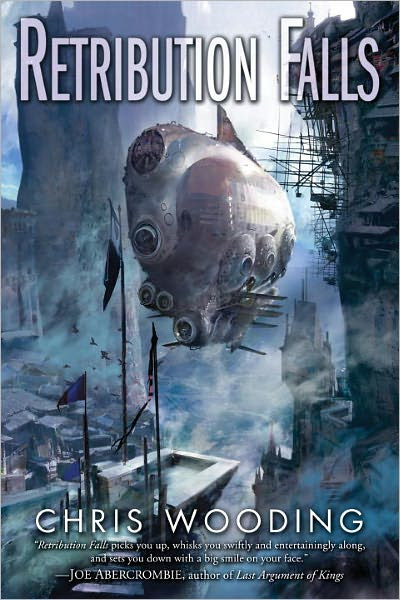 The story tells of a riffraff crew with Captain Darien Frey at the center. He’s a typical roguish-type who cares more about his ship, The Ketty Jay, more than the people working the ship. At least at the outset. Who are those crew members – Crake, the Daemonist and his golem Bess; Silo, the difficult to understand and little spoken ship’s engineer; the ship’s doctor Malvery; pilots Pinn and Harkins; and the newest member of the crew; Jez the navigator. Frey is looking to make a tremendously big score and against his better instincts, bites onto the bait of what is obviously too good to be true. In tying to escape the authorities and the consequences of their framed actions, Frey eventually attempts to bring his crew to the mythical pirate haven of the titular Retribution Falls.

Wooding is mixing a lot of elements in this delicious stew of a book from the larger Speculative Fiction pantry, so to speak. We’ve got pirates, an ill defined future; sorcery (or rather daemonology); beings somewhere between living, dead, and undead; an often steampunkish feel, especially with Crake’s golem; depth of an imagined world and history; and sense-of-wonder adventure. In that sense, the book will very much appeal to readers who tend to science fiction over fantasy, and vice versa. I think Chris may have even dubbed what he’s doing in The Tales of the Ketty Jay as bucklepunk. The term certainly works for this satisfied reader.