The Unremembered by Peter Orullian

In a week, Peter Orullian's debut novel, The Unremembered, will be released, but thanks to the fine folks at Tor, I received and ARC a while back and finished the book last week. On the whole, I enjoyed the novel, but I'd consider it a flawed debut with potential. I'm in the midst of interviewing Mr. Orullian via e-mail, but for now, here's the blurb for my review which just went live at SFFWorld today: 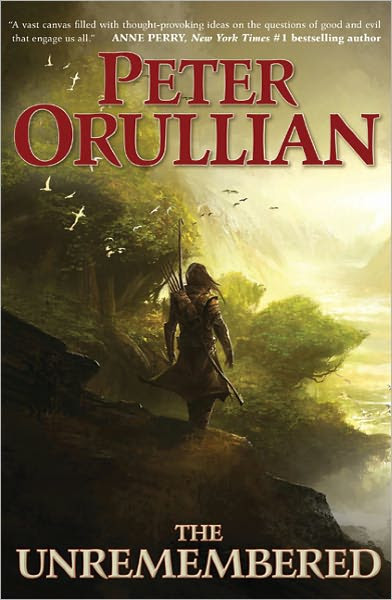 Orullian has the formula down very well in The Unremembered – naïve youth (the woodland archer Tahn Junell) plucked from his hum-drum life by outsiders (the cleric-like Sheason by the name of Vendanj and his companion the warrior woman Mira), to secure his help in vanquishing a mysterious evil that is returning to the land. Reading through the first hundred to two hundred pages, I was very much reminded of the way Robert Jordan began The Eye of the World, itself a homage to The Lord of the Rings.

The world in which these characters live has a great deal of depth which is hinted by the dense and intriguing prologue. Here, Orullian mines nothing less than Paradise Lost for the fall preceded by pride and shows higher powers that can be just as contentious and vain as the best and worst of humanity. Orullian has a lot to play with and it becomes clear that the prologue is table setter for the novel as well as the series, The Vault of Heaven.