A couple from Pyr and most of the paperback releases from the Random House imprints. 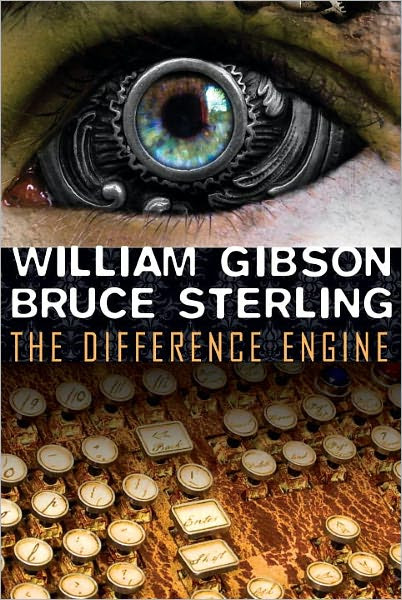 The Difference Engine by William Gibson and Bruce Sterling (Spectra, Trade Paperback 07/26/2011) – I read this years ago when it was on my reading list for my SF Literature course at Rutgers and I didn’t really connect with it at the time. Perhaps some time will allow me to give it another shot?.

1855: The Industrial Revolution is in full swing, powered by steam-driven cybernetic Engines. Charles Babbage perfects his Analytical Engine, and the computer age arrives a century ahead of its time. Three extraordinary characters race toward a rendezvous with the future: Sybil Gerard—fallen woman, politician’s tart, daughter of a Luddite agitator; Edward “Leviathan” Mallory—explorer and paleontologist; Laurence Oliphant—diplomat, mystic, and spy. Their adventure begins with the discovery of a box of punched Engine cards of unknown origin and purpose. Cards someone wants badly enough to kill for.

Part detective story, part historical thriller, The Difference Engine took the science fiction community by storm when it was first published twenty years ago. This special anniversary edition features an Introduction by Cory Doctorow and a collaborative essay from the authors looking back on their creation. Provocative, compelling, intensely imagined, this novel is poised to impress a whole new generation. 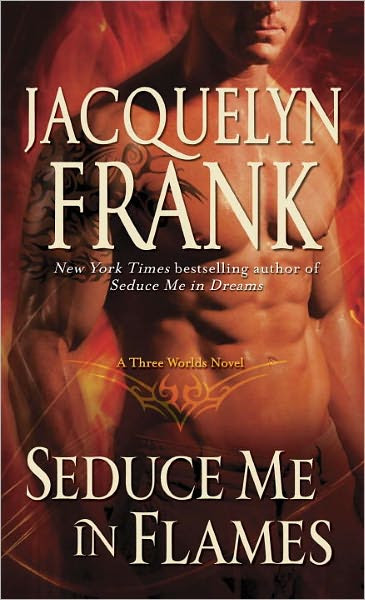 Seduce Me in Flames (Three Worlds Series #2) by Jacquelyn Frank (Ballantine, Mass Market Paperback 07/25/2011) – Second in a new series that seems to be a military science fiction interplanetary romance.


ICY RECEPTION Ambrea Vas Allay is the rightful heir to the throne of Allay. But when she is summoned home from exile, she discovers that her father, who had executed her mother, has died. Her young half-brother, controlled by their uncle, has taken power. Ambrea is torn by an impossible choice: renounce the crown or waste away in prison. The last thing she expects is to be liberated by a huge, tattooed Tarian—or to feel a searing passion for her mysterious rescuer.

SMOLDERING DECEPTION Rush “Ender” Blakely loves being part of the elite force of the Interplanetary Militia and the mission to save the princess Allay. But the tough Tarian hides a fiery secret—a blazing power that makes him literally too hot to handle. He must be crazy to carry a torch for this strong, beautiful princess—when any intimacy between them is bound to be explosive.

BLAZING INSURRECTION As Ambrea steels herself to take back the throne, does she dare entrust this scorching stranger with the fate of an empire—and, even more so, with her heart?

The Secret of Crickley Hall by James Herbert (Tor Trade Paperback 07/05/2011) – Herbert is an accomplished horror novelist, this is his take on the classic haunted house story

Would you stay in a haunted house for more than one night?

Would you live in a place where ghostly things keep happening? Where a cellar door you know you locked the night before is always open the following morning? Where hushed whimpering is heard? Where white shadows steal through the darkness? Where the presence of evil is all around you?

Would you? Should you?

The Caleighs did, but they had their reasons. They should have known better though. As the terror mounts, they begin to regret their decision. As the horror rises, they realize their very lives are at risk....and so is their sanity. For the secret of Crickley Hall is beyond all nightmares.

Sword of Fire and Sea (The Chaos Knight Book One) by Erin Hoffman (Pyr, Trade Paperback 06/19/2011) – This is Hoffman’s debut novel, the first of a series, but she’s designed quite a few video games and authored a fair number of short stories..


Three generations ago Captain Vidarian Rulorat's great-grandfather gave up an imperial commission to commit social catastrophe by marrying a fire priestess. For love, he unwittingly doomed his family to generations of a rare genetic disease that follows families who cross elemental boundaries. Now Vidarian, the last surviving member of the Rulorat family, struggles to uphold his family legacy, and finds himself chained to a task as a result of the bride price his great-grandfather paid: the Breakwater Agreement, a seventy-year-old alliance between his family and the High Temple of Kara'zul, domain of the fire priestesses.

The priestess Endera has called upon Vidarian to fulfill his family's obligation by transporting a young fire priestess named Ariadel to a water temple far to the south, through dangerous pirate-controlled territory. A journey perilous in the best of conditions is made more so by their pursuers: rogue telepathic magic-users called the Vkortha who will stop at nothing to recover Ariadel, who has witnessed their forbidden rites.

Together, Vidarian and Ariadel will navigate more than treacherous waters: Imperial intrigue, a world that has been slowly losing its magic for generations, secrets that the priestesshoods have kept for longer, the indifference of their elemental goddesses, gryphons—once thought mythical—now returning to the world, and their own labyrinthine family legacies. Vidarian finds himself at the intersection not only of the world's most volatile elements, but of colliding universes, and the ancient and alien powers that lurk between them. 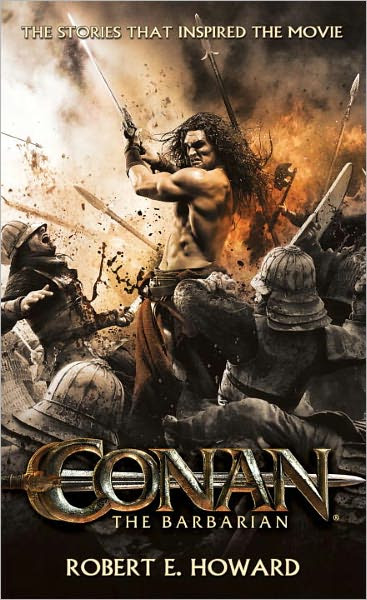 Conan the Barbarian by Robert E. Howard (Del Rey Mass Market Paperback 07/26/2011) – Although Del Rey has reissued all the conan stories in nice trade paperbacks, they’ve taken a handful o the more famous by Howard and put them in this nifty mass market paperback just in time for the new film.
THE CLASSIC STORIES THAT INSPIRED THE BLOCKBUSTER FILM

Conan the Barbarian is one of the greatest fictional heroes ever created—a swordsman who cuts a swath across the lands of the Hyborian Age, annihilating powerful sorcerers, deadly creatures, and whole armies of ruthless foes. Today his name is synonymous with the epic battles of ancient times, but Conan originated in the early decades of the twentieth century with one of the founding fathers of fantasy, the visionary Robert E. Howard. The unforgettable stories collected here form a thrilling adventure, following Conan from his mercenary youth to his bloody conquests on the frontier and even the high seas. Bold and enduring, the legend of Conan the Barbarian continues to grow in popularity and influence. 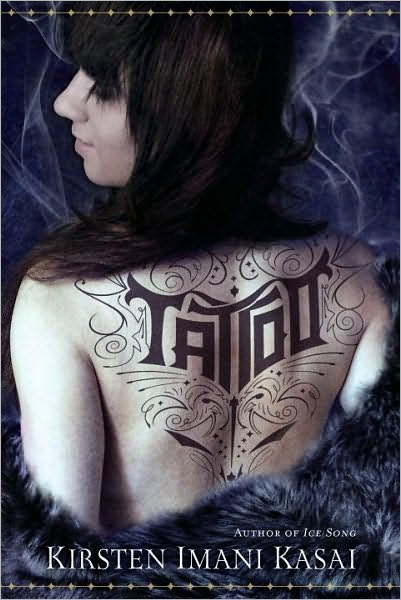 In an environmentally fragile world where human and animal genes combine, the rarest mutation of all—the Trader—can instantly switch genders. One such Trader—female Sorykah—is battling her male alter, Soryk, for dominance and the right to live a full life.

Sorykah has rescued her infant twins from mad Matuk the Collector. Her children are safe. Her journey, she believes, is over, but Matuk’s death has unleashed darker, more evil forces. Those forces—led by the Collector’s son—cast nets that stretch from the glittering capital of Neubonne to the murky depths below the frozen Sigue, where the ink of octameroons is harvested to make addictive, aphrodisiac tattoos. Bitter enemies trapped within a single skin, Sorykah and Soryk are soon drawn into a sinister web of death and deceit.

The Falling Machine (Society of Steam #1) by Andrew P. Mayer (Pyr Trade Paperback 07/11/2011) –First novel in what is being called a Steam Punk JLA, which is also Mayer’s debut novel. This is a great looking book that has the added benefit with a premise that sounds just as cool.

In 1880 women aren’t allowed to vote, much less dress up in a costume and fight crime...

But twenty-year-old socialite Sarah Stanton still dreams of becoming a hero. Her opportunity arrives in tragedy when the leader of the Society of Paragons, New York’s greatest team of gentlemen adventurers, is murdered right before her eyes. To uncover the truth behind the assassination, Sarah joins forces with the amazing mechanical man known as The Automaton. Together they unmask a conspiracy at the heart of the Paragons that reveals the world of heroes and high-society is built on a crumbling foundation of greed and lies. When Sarah comes face to face with the megalomaniacal villain behind the murder, she must discover if she has the courage to sacrifice her life of privilege and save her clockwork friend.

The Falling Machine (The Society of Steam, Book One) takes place in a Victorian New York powered by the discovery of Fortified Steam, a substance that allows ordinary men to wield extraordinary abilities and grants powers that can corrupt gentlemen of great moral strength. The secret behind this amazing substance is something that wicked brutes will gladly kill for and one that Sarah must try and protect, no matter what the cost. 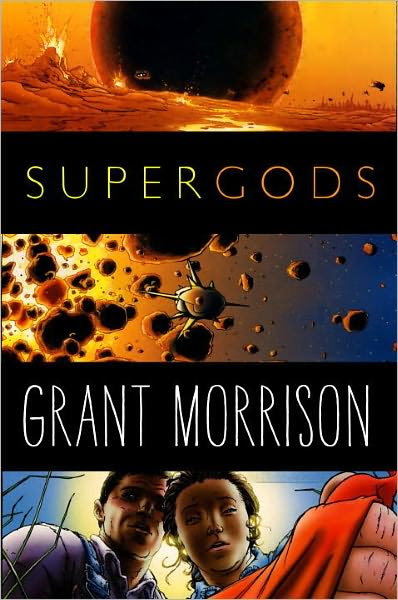 Supergods: What Masked Vigilantes, Miraculous Mutants, and a Sun God from Smallville Can Teach Us About Being Human by Grant Morrison (Spiegal & Grau, Hardcover 07/19/2011) – Morrison is perhaps the most important and controversial comic book writer today, he’s revamped and injected different life into nearly every property. In everything he writes, what is consistent is his love for comic books shines through and I suppose that will be the case with this overview of the medium.

From one of the most acclaimed and profound writers in the world of comics comes a thrilling and provocative exploration of humankind’s great modern myth: the superhero

The first superhero comic ever published, Action Comics no. 1 in 1938, introduced the world to something both unprecedented and timeless: Superman, a caped god for the modern age. In a matter of years, the skies of the imaginary world were filled with strange mutants, aliens, and vigilantes: Batman, Wonder Woman, the Fantastic Four, Iron Man, and the X-Men—the list of names as familiar as our own. In less than a century, they’ve gone from not existing at all to being everywhere we look: on our movie and television screens, in our videogames and dreams. But what are they trying to tell us?

For Grant Morrison, arguably the greatest of contemporary chroniclers of the “superworld,” these heroes are powerful archetypes whose ongoing, decades-spanning story arcs reflect and predict the course of human existence: Through them we tell the story of ourselves, our troubled history, and our starry aspirations. In this exhilarating work of a lifetime, Morrison draws on art, science, mythology, and his own astonishing journeys through this shadow universe to provide the first true history of the superhero—why they matter, why they will always be with us, and what they tell us about who we are . . . and what we may yet become. 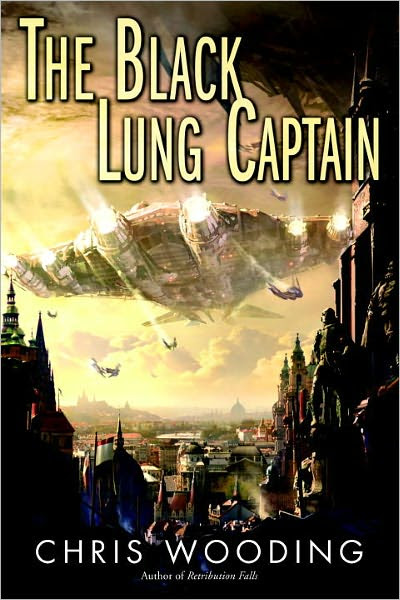 The Black Lung Captain (Tales of the Ketty Jay #2) by Chris Wooding (Spectra Trade Paperback 07/26/2011) – I absolutely loved Retribution Falls, the first book in this sequence, and Hobbit/Mark said the second one was even better. I’m considering this one a must read.

Chris Wooding, author of the thrilling novel Retribution Falls, returns to a fantastical world of spectacular sky battles and high-flying heroics for another epic adventure.

Deep in the heart of the Kurg rainforest lies a long-forgotten wreck. On board, behind a magically protected door, an elusive treasure awaits. Good thing Darian Frey, captain of the airship Ketty Jay, has the daemonist Crake on board. Crake is their best chance of getting that door open—if they can sober him up. For a prize this enticing, Frey is willing to brave the legendary monsters of the forbidding island and to ally himself with a partner who’s even less trustworthy than he is.

But what’s behind that door is not what any of the fortune hunters expect, any more than they anticipate their fiercest competitor for the treasure—a woman from Frey’s past who also happens to be the most feared pirate in the skies.

I have got to get around to reading Retribution Falls. I've read several positive reviews and yet it keeps dropping off my radar. I need to go now and add it to my private Amazon wishlist that I use simply to remember books I want to read.