Three books from the fine folks at Fantasy Flight Games which kick off their tie-in program for books based on their popular games, this program has the makings of possible success as I mentioned in my post at the end of May after visiting their exhibit booth at BEA. Also, some stuff from TOR and Del Rey. 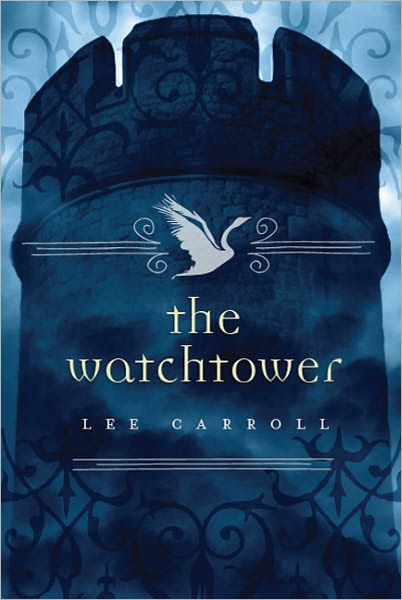 The Watchtower by Lee Carroll (Tor Trade Paperback 08/02/2011) – Sequel to the Carroll’s (who is a pseudonym for the husband and wife author team of Carol Goodman and Lee Slonimisky) Black Swan Rising.

Jewelry designer Garet James is still coming to terms with the astounding revelation in BLACK SWAN RISING that she is the last in a long line of women sworn to protect the world from evil. Now she has received a sign from Will Hughes, the 400-year-old vampire who once helped her defeat the evil threatening to destroy New York City. Hughes, tortured by his own violent history which is vividly reenacted here, has asked her to join him on a quest to rid himself of his curse of vampirism. While looking for Will in Paris, Garet encounters a number of mysterious figures-an ancient botanist metamorphosed into the oldest tree in Paris, a gnome who lives under the Labyrinth at the Jardin des Plantes, a librarian at the Institut Oceanographique, and a dryad in the Luxembourg Gardens.

Each encounter leads Garet closer to finding Will Hughes, but she realizes that she’s not the only one who’s trying to find the way to the magical world called the Summer Country. As Garet struggles to understand her family legacy, each answer she finds only leads to more questions—and to more danger. 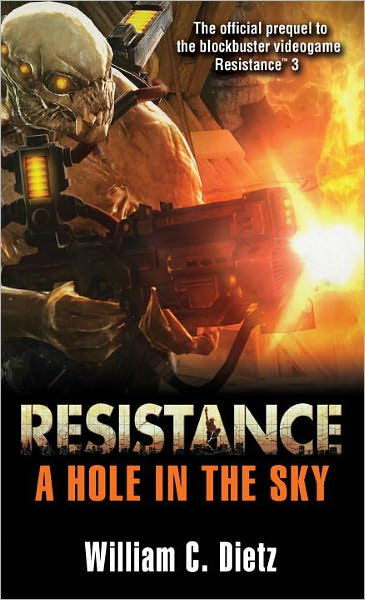 Resistance: A Hole in the Sky by William C. Dietz (Del Rey Paperback 08/02/2011) – Dietz pens another tie-in for the latest installment of the popular SF video game franchise, which is in its third incarnation.

The official prequel to the blockbuster videogame Resistance 3

In this official prequel to Resistance 3, prospects are not looking up for planet Earth or Lieutenant Joseph Capelli. With the Chimera invasion in full swing, America has crumbled under the fierce alien juggernaut, its defenses overrun, millions dead, the rest left to fend for themselves. Many try to avoid the alien virus that turns humans into Chimeran killing machines.

Capelli may be a pariah to the army for killing hero Nathan Hale, but he is still a patriot fighting to save the country and its citizens. However, some soldiers are ready to shoot him on sight—not to mention that Hale’s beautiful sister has every reason in the world to want him stone dead. But Capelli’s used to being in dangerous situations and taking crazy risks. And the next move he intends to make is pure suicide.

Embers of Atlantis: (A Fireborn Novel) by Tracy Hickman (Fantasy Flight Games Mass Market Paperback 8/10/2011) – Hickman is a veteran at these tie-in novels, so Fantasy Flight was smart to enlist him on one of their launch titles. This one is something of an Urban Fantasy.

Powerful scions walk the streets of modern London, oblivious to their true nature. Unknowingly, they carry within them the spirits of reincarnated dragons from an age of high fantasy. As magic begins to emerge once more in the 21st century, long-dormant memories begin to flood the minds of these scions, reminding them of their mystical heritage. Welcome to the world of Fireborn!

Ethan Gallows knows things about his world. He knows there is magic, and he knows he wants nothing to do with it. Yet, when he is sent on the seemingly menial job of filming a museum curator's antique art collection in London, Ethan discovers that he has much more to learn. After witnessing a violent display of sorcery, ancient memories come rushing back to Ethan - memories seen through the eyes of a dragon! With minions of the Taint now seeking him for their own twisted purposes, Ethan must put his trust in Sojourner - a woman claiming to be a draconic scion. Could he really be a dragon of old, or is this some sort of fanatic conspiracy?

Embers of Atlantis is the first novel based on the acclaimed Fireborn roleplaying game setting. Written by New York Times bestselling author Tracy Hickman (Dragonlance), Embers of Atlantis introduces readers to a modern world faced with the sudden emergence of magic.

It is the future, and while the world has changed, crime has not. When an influential lawyer is brutally murdered at the top of the Beanstalk, a towering exo-atmospheric elevator serving as Earth's hub of interplanetary trade, Detective Rick Harrison reluctantly accepts the case. Harrison's investigation soon leads him from the sprawling megapolis of New Angeles to the distant moon base of Heinlein, where he searches for clues amongst an uncooperative assortment of bioroids, clones, and disgruntled human laborers. But Harrison quickly finds himself at the center of an ever-deepening conspiracy, and is faced with the one question he never expected: What is the true definition of humanity?

Free Fall is the first novel based on Fantasy Flight Games's Android, conveying a dystopian world of technology and corruption. This rich universe is masterfully brought to life by New York Times Bestselling author William H. Keith, winner of the H.G. Wells Award and multiple Origins awards, and the celebrated author of over 150 novels, short stories, and other published works.. 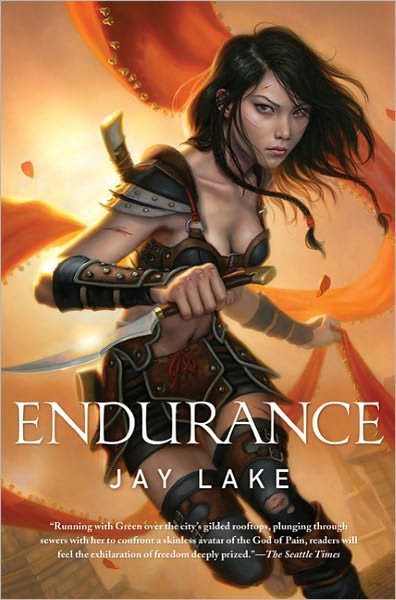 Green is back in Copper Downs. Purchased from her father in sunny Selistan when she was four years old, she was harshly raised to be a courtesan, companion, and bedmate of the Immortal Duke of Copper Downs. But Green rebelled. Green killed the Duke, and many others, and won her freedom. Yet she is still claimed by the gods and goddesses of her world, and they still require her service. Their demands are greater than any duke’s could have been.

Godslayers have come to the Stone Coast, magicians whose cult is dedicated to destroying the many gods of Green’s world. In the turmoil following the Immortal Duke’s murder, Green made a God out of her power and her memories. Now the gods turn to her to protect them from the Slayers.

Jay Lake brings us an epic fantasy not "in the tradition of Tolkien," but, instead, sensual, ominous, shot through with the sweat of fear and the intoxication of power.

The Goblin Corps by Ari Marmell (PyrTrade Paperback 07/26/2011) – I enjoyed Marmel’s The Conqueror’s Shadow and have been looking forward to this one since I heard about it a while back.

Centuries of plotting from the heart of the Iron Keep, deep within the dark lands of Kirol Syrreth—all for naught. Foiled at the last by the bumbling efforts of a laughable band of so-called heroes, brainless and over-muscled cretins without sense enough to recognize a hopeless cause when they take it on. Machinations developed over generations, schemes intended to deliver the world into the Dark Lord’s hands, now devastated beyond salvation. But the so-called forces of Light have paid for their meddling with the life of Princess Amalia, only child of the royal family of Shauntille.

Now, as winter solidifies its icy grip on the passes of the Brimstone Mountains, disturbing news has reached the court of Morthûl. King Dororam, enraged by the murder of his only child—and accompanied by that same group of delusional upstart “heroes” —is assembling all the Allied Kingdoms, fielding an army unlike any seen before. The armies of Kirol Syrreth muster to meet the attack that is sure to come as soon as the snows have melted from the mountain paths, but their numbers are sorely depleted. Still, after uncounted centuries of survival, the Dark Lord isn’t about to go down without a fight, particularly in battle against a mortal! No, the Charnel King still has a few tricks up his putrid and tattered sleeves, and the only thing that can defeat him now may just be the inhuman soldiers on whom he’s pinned his last hopes.

Welcome to the Goblin Corps. May the best man lose.

Ghouls of the Miskatonic (The Dark Waters Trilogy Book 1) by Graham McNeill (Fantasy Flight Games Mass Market Paperback 08/10/2011)– …and the third major series from Fantasy Flight kicks off with one of the hottest tie-in writers of the day, Graham McNeill. This one is set in the Lovecraftian Arkham Horror world. This book puts my tally of McNeill books on the to-read pile to at least a half-dozen.

. It is the roaring twenties - a time of jazz, gin, and g-men. But a shocking murder has upset the tranquility of Arkham, Massachusetts. When the mutilated body of a student is found on the grounds of Miskatonic University, the baffled authorities struggle to determine who - or what - is responsible. When two more students go missing, is it the work of the same killer, or something much darker? While a Miskatonic professor seeks answers in the ramblings of an insane former colleague, nightmares of a terrifying sunken city plague his most gifted student. Meanwhile, a down-on-his-luck reporter trawls the dark underbelly of the town for clues, while a bootlegger escapes a deal gone horribly wrong in possession of a strange, otherworldly device. Now, these unlikely investigators must come together to face horrors beyond comprehension, as they seek answers to a mystery that threatens to destroy all they hold dear!

Ghouls of the Miskatonic is the first novel in The Dark Waters Trilogy by New York Times bestselling author Graham McNeill. 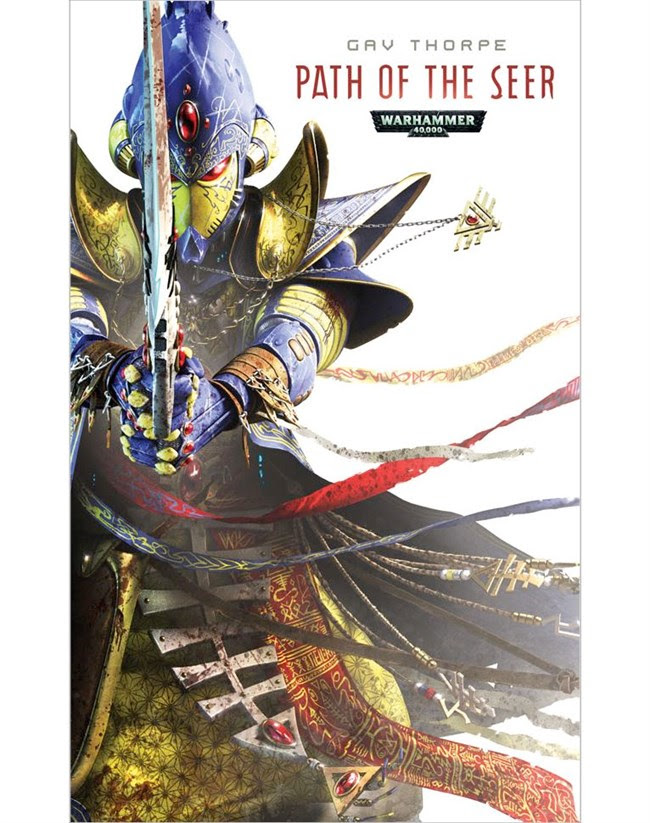 Path of the Seer (Eldar/Warhammer 40,000) by Gav Thorpe (Black Library Mass Market Paperback 07/07/2011) – Second in a mini-series set within the vast WH40K universe, focusing on the mysterious Eldar.

The ancient eldar are a mysterious race and each devotes their life to a chosen path that will guide their actions and decide their fate. Thirianna abandons her simple existence to embark upon the mysterious Path of the Seer. She will tread a dark and dangerous road that leads her to the other realm of the warp, where daemons are made flesh and nightmares are manifest, for only there can she realise her psychic abilities. After unleashing her powers in battle and communing with the spirits of her craft world, Thirianna turns her skills to discerning the future amidst the myriad strands of fate. Her visions reveal a great threat descending on Alaitoc, and both the living and the dead will march to war to defend it.