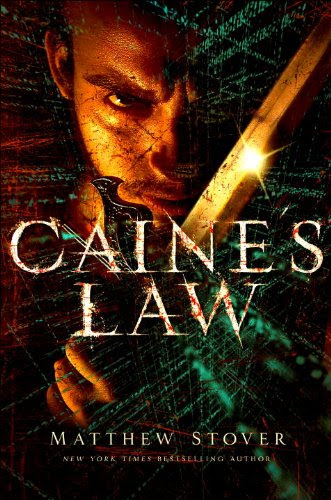 SOME LAWS YOU BREAK. SOME BREAK YOU.
AND THEN THERE’S CAINE’S LAW.

From the moment Caine first appeared in the pages of Heroes Die, two things were clear. First, that Matthew Stover was one of the most gifted fantasy writers of his generation. And second, that Caine was a hero whose peers go by such names as Conan and Elric. Like them, Caine was something new: a civilized man who embraced savagery, an actor whose life was a lie, a force of destruction so potent that even gods thought twice about crossing him. Now Stover brings back his greatest creation for his most stunning performance yet.

Caine is washed up and hung out to dry, a crippled husk kept isolated and restrained by the studio that exploited him. Now they have dragged him back for one last deal. But Caine has other plans. Those plans take him back to Overworld, the alternate reality where gods are real and magic is the ultimate weapon. There, in a violent odyssey through time and space, Caine will face the demons of his past, find true love, and just possibly destroy the universe.

Hey, it’s a crappy job, but somebody’s got to do it.

Hopefully the Mayan Apocalypse will not happen.
at 7/06/2011

Awesome! SO looking forward to this.