Over the past week both Mark and I have posted one new review each at SFFWorld, but they do share a common theme – werewolves.
Mark, on his continued kick of reviewing recently reissued novels, reviewed the first book in Carrie Vaughn’s Kitty the Werewolf series - Kitty and the Midnight Hour: 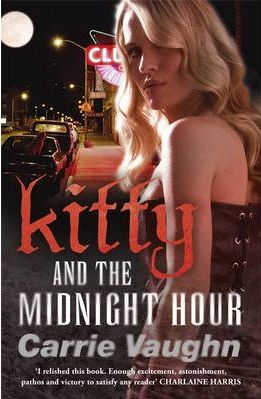 Ok. There are times when the books you read help you explore the inner consciousness of your soul and those around you, that give you a better understanding of the world’s complexities around you.

This isn’t one of them. But then, it doesn’t try to be. Instead, this is a fast-paced, entertaining read, with much of it reading as if it were a script, because it is based around radio-talk.

In particular, where this one scores is the character of Kitty Norville herself. She’s young and cute, if a little downtrodden at first, and would clearly be a great relatable character for those young twenty-somethings to aspire to who want to move on from Twilight, especially by the end of the book

Enge continues to elaborate on the character of Morlock, showing the depth of his abilities. He is a broken man with a spike in his head and he eventually contracts the “ghost disease” but still, Morlock manages to lead the escape, rally the werewolf populace against their oppressors, lead the building of flying equipment for the werewolves, and contend with the Strange Gods.

I enjoyed this novel more than the first Morlock novel-length adventure (Blood of Ambrose), but I still had some problems with the book. Even though Morlock was the protagonist, I still felt somewhat disconnected from him and thought he was off-page a bit too much considering he is the main character. The narrative pull in the early portion of the novel when Morlock was imprisoned was very strong, but once Morlock escaped the pull weakened.