Another three reviews this week at SFFWorld, two from Mark one from me. I’ll sandwich my review between two of Mark’s, the first of which will be The Scar-Crow Men, the second installment of Mark Chadbourn’s Will Swyfte/Swords of Albion series::

Things are clearly not well in Elizabethan England. This is a darker tale than The Sword of Albion. Plague spreads across London’s streets and the Queen has moved her court out of London for fear of catching the disease.

This one starts off fast: there’s a grisly death involving big spiders in Saint Paul’s Cathedral, followed by the death of one of Will’s closest friends. Will is seen as someone clearly upset by this and also under suspicion of becoming more susceptible to atheist ways. Will is convinced his friend’s death was not in a common bar brawl but seems to be being covered up. Convinced that the murder was caused by men who wish Will no good, Will investigates why his friend was killed and by whom. And there seems to be a scheme to kill England’s spies: with Will being the best known spy in England, he’s a major target. The Unseelie Court seems to be making a move, and Will seems to be in line for assassination..

I made my second foray into Warhammer 40,000’s Horus Heresy saga with False Gods: 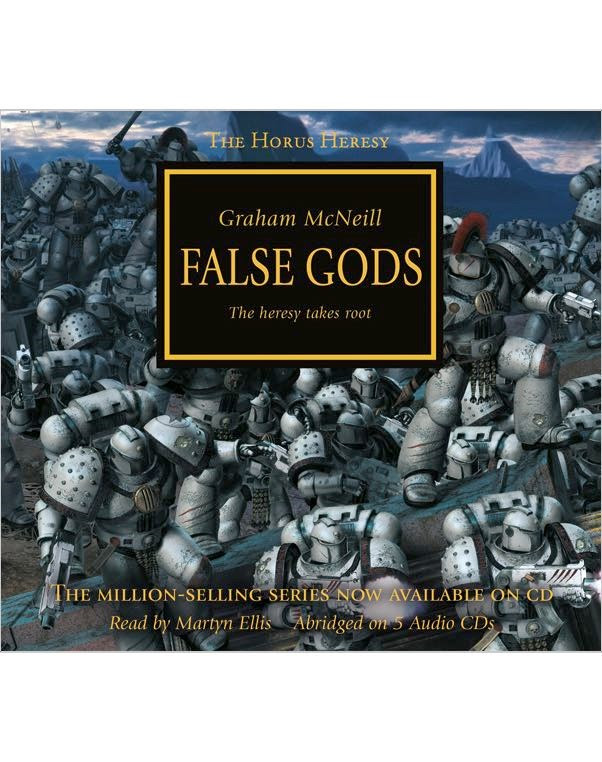 This was my first experience with Graham McNeill’s fiction and I’m both happy and saddened by that fact. Sad because I’ve missed out on what could possibly be some great fiction and happy at the prospect that I’ve got another author’s work to consume. McNeill is one of Black Library’s top writers and handing him the reigns of the second novel their marquee series is proof that their faith in him is justified. What impressed me most about the story was McNeill’s abilities at balancing philosophical/theological ideas/themes along with the expected action of a Military SF novel. The strongest element of the novel, for me, was the depiction of Horus healing in the Warp as he grows frustrated with the neglect he feels the Emperor is showing him along with the nature of the universal reality and conflict.

All told, I am fascinated with the over-reaching story arc unfolding in the Horus Heresy and plan on following along, either in this superb audio versions or the original printed volumes in addition to more of McNeill’s work.

We’ll round out today’s post with Mark’s review of a revised classic Heinlein novel, Puppet Masters ,

The Puppet Masters is Heinlein’s version of an alien invasion tale, written at a time when such tales were popular in film and in prose.


The tale itself is quite simple. Told in the first person, ‘Sam’ Nivens (not his real name) is working for the US secret service. This means different names, different places, different faces (as I find on the first page a blonde in bed with Sam, who wasn’t there in my original version!)
…

This is perhaps where I see a transition between the juveniles and say, Stranger in a Strange Land: this still has the excitement and the pace of the juvies, but the addition of the posturing lecture seen in later books such as Stranger. That and the need to get naked. Sometimes ‘more’ can mean ‘less’, and I’m reminded of that, as I was when I read the longer version of Stranger in a Strange Land – I’m in two minds to decide whether this longer Puppet Masters is one of those examples.