A fairly slow week of releases, which isn't too surprising since Independence Day falls dead in the middle of the week. 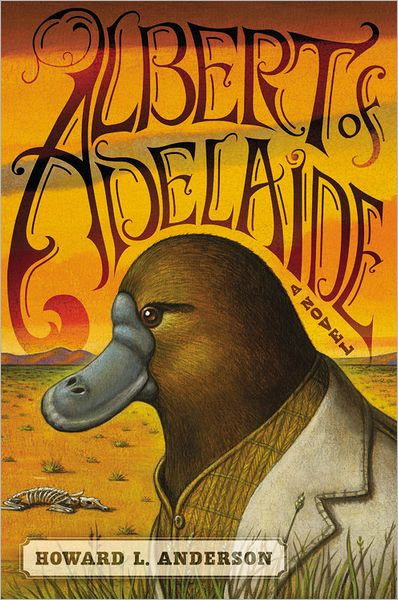 Albert of Adelaide by Howard L. Anderson (Twelve Books Hardcover 07/17/20212) – Like Terry Brooks, Anderson is a lawyer, like George R.R. Martin and Daniel Abraham, he lives in New Mexico. Like none of them, his first novel is about a platypus.

At once an old-fashioned-buddy-novel-shoot-'em-up and a work of deliciously imagined fantasy, Howard L. Anderson's dazzling debut presents the haunting story of a world where something has gone horribly awry . . .

Having escaped from Australia's Adelaide Zoo, an orphaned platypus named Albert embarks on a journey through the outback in search of "Old Australia," a rumored land of liberty, promise, and peace. What he will find there, however, away from the safe confinement of his enclosure for the first time since his earliest memories, proves to be a good deal more than he anticipated.

Alone in the outback, with an empty soft drink bottle as his sole possession, Albert stumbles upon pyromaniacal wombat Jack, and together they spend a night drinking and gambling in Ponsby Station, a rough-and-tumble mining town. Accused of burning down the local mercantile, the duo flees into menacing dingo territory and quickly go their separate ways-Albert to pursue his destiny in the wastelands, Jack to reconcile his past.
Encountering a motley assortment of characters along the way-a pair of invariably drunk bandicoots, a militia of kangaroos, hordes of the mercurial dingoes, and a former prize-fighting Tasmanian devil-our unlikely hero will discover a strength and skill for survival he never suspected he possessed.

Told with equal parts wit and compassion, ALBERT OF ADELAIDE shows how it is often the unexpected route, and the most improbable companions, that lead us on the path to who we really are. Who you journey with, after all, is far more important than wherever it is you are going. 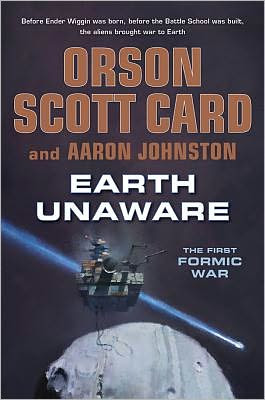 Earth Unaware by Orson Scott Card and Aaron Johnston (Tor Hardcover 07/17/2012)– Who hasn’t read Card’s landmark Ender novels? I know I read quite a few of them and made it through a few of the Bean sequels before stopping. I liked Ender’s Game and Speaker for the Dead very much and they still stand pretty high in my mind.


The mining ship El Cavador is far out from Earth, in the deeps of the Kuiper Belt, beyond Pluto. Other mining ships, and the families that live on them, are few and far between this far out. So when El Cavador’s telescopes pick up a fast-moving object coming in-system, it’s hard to know what to make of it. It’s massive and moving at a significant fraction of the speed of light.

El Cavador has other problems. Their systems are old and failing. The family is getting too big for the ship. There are claim-jumping corporate ships bringing Asteroid Belt tactics to the Kuiper Belt. Worrying about a distant object that might or might not be an alien ship seems…not important.

They're wrong. It's the most important thing that has happened to the human race in a million years. The first Formic War is about to begin.

No one expected the oil to last forever. How right they were….

A geopolitical miscalculation tainted the world’s major oil fields with radioactivity and plunged the Middle East into chaos. Any oil that remains usable is more prized than ever. No one can build solar farms, wind farms, and electric cars quickly enough to cope. The few countries still able to export oil and natural gas—Russia chief among them—have a stranglehold on the world economy.

And then, from the darkness of space, came Phoebe. Rather than divert the onrushing asteroid, America captured it in Earth orbit.

Solar power satellites—cheaply mass-produced in orbit with resources mined from the new moon to beam vast amounts of power to the ground—offer America its last, best hope of avoiding servitude and economic ruin.

As though building miles-across structures in space isn’t challenging enough, special interests, from technophobes to eco-extremists to radio astronomers, want to stop the project. And the remaining petro powers will do anything to protect their newfound dominance of world affairs.

NASA engineer Marcus Judson is determined to make the powersat demonstration project a success. And he will—even though nothing in his job description mentions combating an international cabal, or going into space to do it.

I know your issues with him, my issues are a little different - tapping the well five too many times.

That said, ENDER'S GAME and SPEAKER FOR THE DEAD are masterpieces if they can be found secondhand.

Nah, I avoid him pretty much completely on principle ;)