A day late since the book I review this week took a tad bit longer to read (a good thing as I feel a more deliberate read allowed me to enjoy it more) and the weekend was extremely busy to the point that I didn’t have the opportunity to even open up the laptop Saturday or Sunday for an extended amount of time. Meanwhile, Mark continues his trek through the genre’s past.


Most readers of this blog are familiar with David Brin. He’s a giant of the SF field despite not having published a novel in over a decade. Well, Existience is his (ready for the cliché) triumphant return to the form and before I leap to the cover and review excerpt, has me eager to read more from him. Here’s part of what I thought about Existience:

The novel begins about a half a century in the future in a world not too dissimilar to our own, save for a slightly changed US, and a world hit with a destructive nuclear event. The Mesh, which is one of the many internets us viewable all times with special glasses like Google Glasses and AI is an every day fact of life. Although the world has suffered catastrophes, like the aforementioned war and a melting of polar ice caps, and changed drastically, Existence is not a dystopian novel even if it is set in a somewhat post-apocalyptic environment. Early on, one of the points Brin makes through his characters and the world-building is that people survive and persevere. Though bad things have happened, people will continue on and adjust. It is both a novel of ends and beginnings, a novel of first contact and a novel that approaches an answer to the question partially framed by the Fermi Paradox “Are we alone in the universe?”
…
Part of this world-building is achieved through snippets cushioning each relatively short chapter. These snippet chapters range in content from debates about the artifact between two prominent figures, journalistic entries from Tor, and other such passages to give an authentic feel to the world. For my reading sensibilities, this structure worked well to impart authenticity and keep the pace of the novel at a nice level. The structural element that was a bit jarring was the abrupt leap in time in some sections, particularly from the first ¾ or so of the novel to the chapters that conclude the novel.


Mark, the resident genre historian SFFWorld has been reading through his Heinlein Virginia Edition and his latest revisiting of an old Heinlein tale is Sixth Column 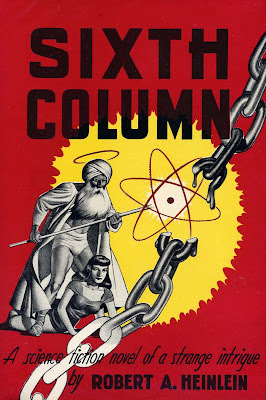 This one is what they call ‘a fixup’, originally being in three parts in the January, February and March editions of Astounding Magazine, under the editorial tuition of John W. Campbell. It became a slightly revised novel in 1949, with the author’s real name rather than his pseudonym, and a little tidying up.

It’s hard for me to decide whether this tale is a tribute or a criticism of L. Ron Hubbard, who both Heinlein and Campbell knew well. Campbell was an interested party in Hubbard’s development of Dianetics, and the idea of a religion being created to cover up other activities does sound like a veiled criticism that could be equally applied by its decriers to Scientology. It has been suggested by some critics that Calhoun, the stiff and rather disliked scientist who eventually ends up insane, believing himself to be an incantation of the god Mota, is at least partly based on Campbell himself.

Whilst Campbell’s version emphasised the race aspect, Heinlein’s tried to make it more scientific and using the so-called ‘soft sciences’ such as psychology and sociology to make the tale work. It is no accident that Whitey has a civilian background in advertising.