Back to Tuesday and back to three reviews – Mark, myself, and Nila..

Mark caught up with a novel I dubbed the most impressive debut I read in 2010, the first novel in The Milkweed Tryptich by Ian Tregillis, Bitter Seeds: 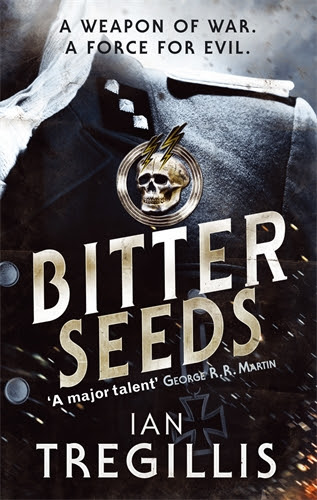 Two narrative threads run here. For the German point of view we are mainly told of events from the perspective of Klaus, who with his twin sister Gretel and a number of other children are being trained by the ‘mad doctor’ Doktor von Westarp. Westarp has been experimenting on the ‘bitter seeds’, in order to enhance select abilities. These include the skill to walk through solid objects, teleport, see the future, levitate, spontaneously combust and so on.

The novel alternates between the two perspectives. In terms of time, the story begins in the 1920’s, before the Second World War, but is mainly based in 1939-41, during what appears to be the first months of Britain’s conflict against the Germans.

…
In brief, the novel can sound, like the quote I gave at the start, rather sensational. However, after reading, I found it to be surprisingly well researched, and knowledgeable enough so to create a realistic world that enhances that often-desired suspension of disbelief when reading. Though the initial thoughts of the reader might suggest something superficial, it wasn’t long before I was thinking, ‘You know, it might just....’


I’ve been enjoying Peter V. Brett’s Demon Cycle since I first read The Warded Man nearly three years ago. A little over a year ago I had the chance to read Brayan’s Gold, a novella set in the same world. I’ve since re-purposed a very short review into a somewhat short review for SFFWorld (in the absence of a brand new review of a book I’ve more recently read). In short, it was nice novella:

Brayan’s Gold, a novella-length entry in the world of Peter V. Brett’s The Warded Man recounts Arlen Bales’s first major job as an apprentice messenger. His job is to ferry a box of thundersticks to Count Brayan’s Gold Mine which lies atop a treacherous mountain. Being Arlen’s first real mission as a messenger, it of course doesn’t go quite so smoothly, which begins when Arlen buts heads with his mentor, Curk. Arlen is much more strong-headed than Curk would like, but having grown up with a father who lived in fear, Arlen sees much of his father in his mentor. When Arlen and Curk are threatened by raiders, Curk runs while Arlen stands up to the bandits, and he later battles the much feared demons who are humanity’s enemy. 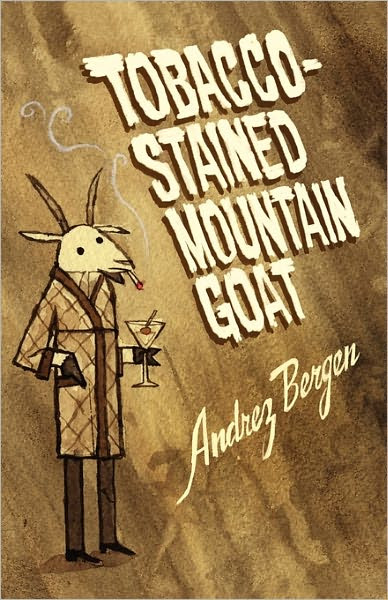 It all begins when Mr. Maquina manages to do what he has avoided in his job as a Seeker of Deviants: he kills one by mistake. In a blundered moment, Floyd kills a young, female Deviant, members of closed society that have been deemed unworthy and in need of Hospitalization. Until this one Deviant, Floyd had managed to avoid killing any Deviant, instead doing his job and bringing them in for treatment (that often killed them anyway). Floyd is haunted by the murder in more ways than one throughout the book, and we learn that until he comes to terms with it, those he loves will be hunted down and killed.

Tobacco-Stained Mountain Goat (TSMG) is a first-person narrated tale, and it took me over half the book to get into the story. Floyd just didn’t do it for me. (Though, to be fair, most first-person narratives don’t.) He was drunk or high more often than not, experienced several blackouts that confused him (and me), and he seemed such a loser it didn’t make sense why he kept succeeding. It seemed there were no consequences for his failures. Sure, other characters paid for his shortcomings, but he didn’t. Couple all that with Mr. Bergen’s penchant to refer to antiquated, foreign, or just plain odd movies throughout the book, and one can understand that TSMG doesn’t score that high for me.