Double A Reviews - Aaron and Arnott at SFFWorld

Mark and I check with two reviews this week...

Rachel Aaron’s Eli Monpress series was softly re-launched earlier in the year with a nice, big, fat omnibus with great new cover art.  The Spirit War, is the fourth book and another solid entry in an entertaining series 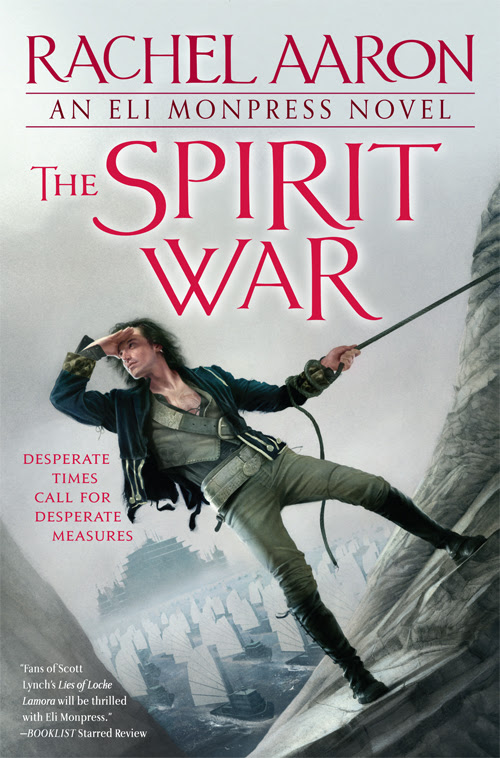 Having established her characters to great length in the first three novels, Aaron expands the scope of the story into one with a more global focus. With the characters established in previous novels, this also allows Aaron to open the novel with a flashback to one of the characters, in this case Josef, to days where we can piece together very quickly just who the character is and how Josef acquired the Heart of War – the greatest magical sword in the world.

She introduces, as the title might imply, a couple of warring factions into the mix; nations which were more or less on the periphery in previous novels. In addition to the two powers (The Nation of Osera and the reawakened Immortal Empress) on the brink of war, other powers who govern the world (The Spirit Council and The Council of Thrones) are embroiled in a philosophical conflict about how to handle the reawakened Immortal Empress. Wars about wars, one could say.

Perhaps the most enjoyable elements of the novel were the backstories of Josef and Eli that came more into the forefront of the novel. One lays the groundwork for much of the plot of The Spirit War while the other sets up Spirit’s End which is likely the conclusion of the saga. Though it becomes abundantly clear whose backstory fuels The Spirit War very early on in the novel, I’ll still leave that to the reader to discover.


Mark’s was pleased with Jake Arnott, The House of Rumour: As the story progresses we get a variety of different characters and we are told of events shown from different viewpoints. In the present, Zagorsky is given details of a mysterious file that suggests that Hess’s defection to Scotland in the Second World War was possibly connected to the consequences of an occult temple service in the US in 1941. The story then goes back to the 1940’s and 50’s and tells of members of that meeting, which includes many SF filmmakers and writers whom Zagorsky knows. Jack Parsons, one of the founders of the NASA Jet Propulsion Laboratory (JPL) was not only a scientist and avid SF reader, with many connections in the genre, but also an active member of a Satanist cult who, in this story, is encouraged to perform strange deviant acts in order to encourage the world’s race into space. As flying saucers are first reported and Sputnik launches into space, UFO cults and space-based religions occur in the late 1940’s and 50’s as part of this global hysteria. Many of these people known by Zagorsky become involved in the move to the SF genre being more mainstream and B-movie film making.

I'm the editor for the Books section on Before It's News,‭ ‬and I came across your website. ‭

We'd love to republish your RSS feed on our site,‭ ‬with a link back to your website.‭ ‬You'd benefit from having some of our millions of readers see your posts and go through to your blog.