Mark added another trifecta of reviews late last week and I added my usual Monday review yesterday to SFFWorld.

Before jumping into the reviews, I’ll point out our two Book Club discussions at SFFWorld: 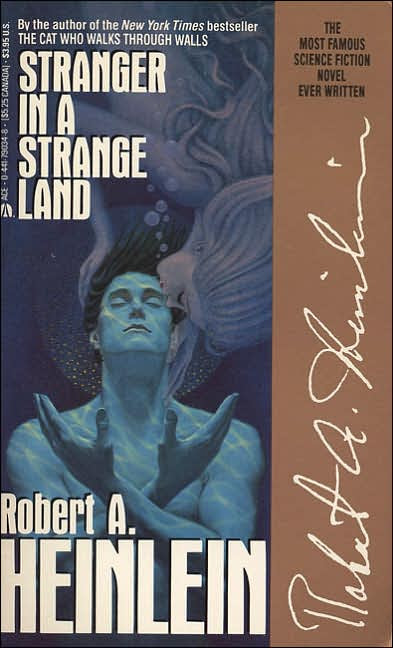 
Stranger in a Strange Land by Robert A. Heinlein

The first review I’ll mention is Mark’s review of Ben Aaronovich’s Rivers of London (Midnight Riot in the US). Aaronovich spent some time writing for Doctor Who:

In a slightly creepy Lovecraftian twist, we find that behind all these initially random incidents there is something darker, deeper and more insidious at work – a invisible malevolent thing, that seems to want revenge by inciting violence and unrest amongst the masses of London. Something that Peter and Chief Inspector Nightingale must stop.

Partly reminiscent of Gaiman’s Neverwhere, part Mike Carey’s Felix Castor, this is an entertaining romp that doesn’t come across too badly. The first-person perspective and tone is light, much lighter than Carey’s books, for example, though this is interspersed with some quite nasty violence: a baby thrown out of a window, people having their faces explode.

To say that David Weber is one of the more prolific authors in the genre would be stating the obvious. At the end of 2010, he published Out of the Dark, which is an expansion of his entry in the Martin/Dozois-edited anthology Warriors. Here’s what I thought of the novel:

The story itself very much had the feel of a disaster novel. In some ways, I was reminded of Walter Jon Williams’s The Rift or even Stephen King’s The Stand for the varied characters and their related storylines Weber introduced in the first third of the novel. Weber shows us individuals in the military who are on the front lines in the United States and have lost their families, he shows us retired military people who are well prepared and form the beginning of a resistance, and he also introduces us to a military unit stationed in Romania that teams up with a local guerilla force in order to combat the alien threat.

The ending definitely has that Deus Ex Machina feel (as did the novella), but while I thought it was somewhat effective, I also thought it could have been played a bit more rationally especially compared against the other rational elements of the novel. I won’t spoil what the “surprise” is, but it may be one of the worst kept surprises in genre fiction published 2010 and the hints are quite blatant up to the ending.

In the UK, one of the more interesting publishing projects kicking off is the re-publication of David Wingrove’s Chung Kuo series (I’d suggest anybody interested in the series check out Adam Whitehead’s blog posts on the series republication). Anyhoo, Mark reviewed the first book in the series, well as it turns out a prologue to the series, Son of Heaven:

Son of Heaven is a completely new prelude to the series and begins to set up scenarios for the rest of the series.

Overall, the book focuses on one main character, Jake Reed, at different times before the Chinese invade England (Ying Kuo). The first part of the book is set in Autumn 2065, subtitled ‘The Last Year of the Old World’ and deals with Jake’s life in rural Dorset, twenty years after the global upheaval known as ‘the Collapse’. It is an odd combination of unchanging rural idyll, steeped in history and tradition but with a contemporary survivalist mentality. Strangers are viewed with suspicion, and when raids occur, shot. This was reminiscent to me of John Christopher’s The Death of Grass.

For the sake of clarity I will admit that when I read the original (twenty years or so ago!) I was impressed. The books were new, exciting and well thought out (at the beginning, anyway.) They were quite adult and pleasingly complex.

I’ll close out the summary of reviews with Mark’s review of what could be a monumental biography project covering the life of one of The Big Three of SF: Robert A.Heinlein Robert A. Heinlein: In Dialogue with His Century: Volume 1 (1907-1948): Learning Curve. Here’s what Mark thought of the book:

So the credentials seem to be there. It must also be noted that this hefty book has not been rushed in its production, with considerable time to research and write it. Patterson’s website says, ‘On January 1, 2000, Mrs. Heinlein phoned Bill and asked him to undertake the formal biography of her husband, which he commenced researching in February 2000. The research phase occupied the years 2000 through about 2003, and he commenced writing in the latter part of 2002. Mrs. Heinlein saw and approved the first 120,000 words of the biography (including the Heinlein family history which has been moved to an Appendix in the published first volume of the biography).


The $6,000,000 question though is whether we need to know as much information as is given here. Frankly, no. I suspect that this book, as readable as it is, will cater for an audience that already has an interest, and probably (like me) for the SF aspects. As you might gather, this doesn’t happen until after the midway point of this large volume. Consequently some readers may be disappointed, or get bored with the lengthy details of Heinlein’s childhood and naval training.