Herbert and Hodder reviewed at SFFWorld

Two new reviews this past week at SFFWorld from the usual suspects. Mark and me.

First off is my review of a very interesting debut novel. Mark Hodder’s Burton & Swineburne in The Strange Affair of Spring Heeled Jack. This is the first book in a series of steampunk/alternate history/mysteries, which (as usual with Pyr) comes in a fantastic looking package:

For those not in the know, Spring Heeled Jack is a mythical character/creature of English Victorian folklore described by some as a boogeyman and others as a hero. Regardless, the character has strong ties to the Victorian era and lends very well to being the center of a steampunk novel, which is the case here in Hodder’s novel. Though his appearances are limited through the first half of the novel, Jack has more of a boogeymanish air to the characters, particularly Sir Richard Burton, who encounter him. The first half of the novel does a fine job of setting the stage and bringing Richard Burton and Algernon Swineburne together, this novel is after all the first in Hodder’s chronicles of their adventures together.

The second half of the story focuses on Spring Heeled Jack himself. Here, Hodder could have easily dropped the ball. Although his appearances were few in the first half, Jack had a major impact driving the narrative. He was enigmatic and in many ways unknowable. Hodder reveals the background and it is just as interesting a character under greater scrutiny as it was when his true nature was mysterious.

Thanks to some recent discussion on the seminal SF novel Dune Mark took a look at what could be considered a minor work from Frank Herbert The Dragon in the Sea: 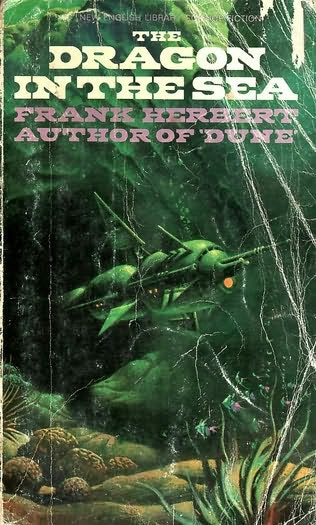 Being from 1956, the book is imbued with that 1950’s Cold War paranoia, despite being set in the 21st century. Parts of the world have been in a nuclear war. The remaining Eastern Power and the US are involved in a battle over oil reserves, as they continue to overuse their reserves. The tale begins when Ensign Ramsey of the Bureau of Psychology is drafted in to join a super-tug submarine crew involved in secret raids, siphoning off much-needed oil from the Russian’s – sorry, Eastern Power’s - reservoirs. The past twenty raids have led to their crews not returning. Heading off to a location under the marginal seas of the Eastern Power’s continental shelf, Ramsey’s job is to decide whether this is because of the actions of the Eastern Power or simply that the stress of the work is causing the crew to fail.