Only a few arrivals this week, but intriguing books nonetheless. 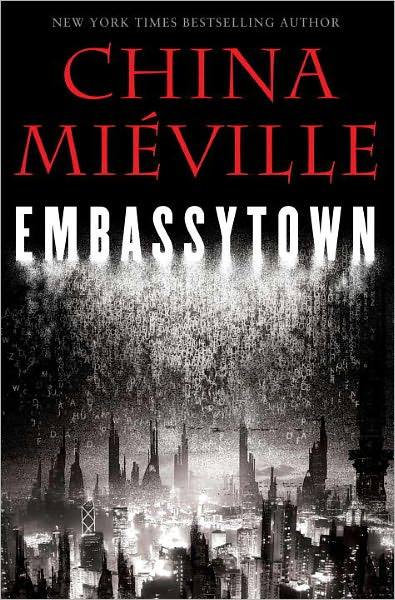 Embassytown by China Miéville (Del Rey, Mass Market Paperback 03/01/2011) – Miéville turns his pen to far-future (some might say space opera) in what looks to be another terrific, and at the very least, interesting novel.

China Miéville doesn’t follow trends, he sets them. Relentlessly pushing his own boundaries as a writer—and in the process expanding the boundaries of the entire field—with Embassytown, Miéville has crafted an extraordinary novel that is not only a moving personal drama but a gripping adventure of alien contact and war.

In the far future, humans have colonized a distant planet, home to the enigmatic Ariekei, sentient beings famed for a language unique in the universe, one that only a few altered human ambassadors can speak.

Avice Benner Cho, a human colonist, has returned to Embassytown after years of deep-space adventure. She cannot speak the Ariekei tongue, but she is an indelible part of it, having long ago been made a figure of speech, a living simile in their language.

When distant political machinations deliver a new ambassador to Arieka, the fragile equilibrium between humans and aliens is violently upset. Catastrophe looms, and Avice is torn between competing loyalties—to a husband she no longer loves, to a system she no longer trusts, and to her place in a language she cannot speak yet speaks through her. 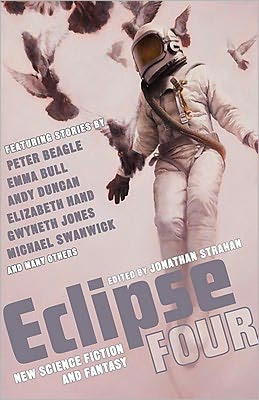 Eclipse Three edited by Jonathan Strahan (Night Shade Books Trade Paperback October 2009) – This is the fourth in Strahan’s acclaimed annual, unthemed anthology series of original fiction. I thought the first one was good and Dan liked both the second and the third installments.

Continuing in the footsteps of the multiple-award-nominated anthologies Eclipse One, Eclipse Two, and Eclipse Three, Eclipse Four delivers new fiction by some of the genre's most celebrated authors, including Andy Duncan's tale of a man's gamble that he can outrun a bullet; Caitlin R. Kiernan's story of lovers contemplating the gravity of a tiny black hole; Damien Broderick's chronicle of a beancounter who acquires a most curious cat; Michael Swanwick's tale of the grey man who pulls an unhappy woman from the path of an oncoming train; Nalo Hopkinson's story of ghosts haunting a shopping mall; and Gwyneth Jones's story of an alien priest who suffers a crisis of faith...

The Scarab Path (Shadows of the Apt 5) by Adrian Tchaikovsky (Pyr , Trade Paperback 04/13/2010) – This series is really gaining momentum. For my part, I read the first installment and found it interesting – not perfect, but with enough potential (coupled with the good word of mouth the series gets) to have me interested in the subsequent volumes. Tchaikovsky writes fast and Pyr is gaining ground on the UK release schedule, so I’ve now got four books in the series if I want to fully catch up.


The war with the Wasp Empire has ended in a bitter stalemate, and Collegium has nothing to show for it but wounded veterans. Cheerwell Maker finds herself crippled in ways no doctor can mend, haunted by ghosts of the past that she cannot appease, seeking for meaning in a city that no longer seems like home.

The Empress Seda is regaining control over those imperial cities that refused to bow the knee to her, but she draws her power from something more sinister than mere armies and war machines. Only her consort, the former spymaster Thalric, knows the truth, and now the assassins are coming and he finds his life and his loyalties under threat yet again.

Out past the desert of the Nem the ancient city of Khanaphes awaits them both, with a terrible secret entombed beneath its stones...

This is the fifth novel in the Shadows of the Apt series following Empire in Black and Gold, Dragonfly Falling, Blood of the Mantis, and Salute the Dark.