The Crippled God reviewed at SFFWorld

Two reviews this week, one from me and one from Owen. I’ll start off with Owen’s since the book he’s up-to-date with the series and was able to review the final book in Steven Erikson’s Malazan Book of the Fallen sequence, The Crippled God. I’ve got two books to read before I get to that one, but Owen’s review is fair and balanced:

As with the format of most of the Malazan novels, TCG is a slow building story as the pieces move towards convergence one last time. In the first half of the book the storyline with arguably the quickest progression is the Shake as they stand once more upon the Shore and dispense their duty. This is the most compelling of the threads that seemed to be randomly introduced over the course of the last few books, being in turns both brutal and emotional, if a little unlikely, leading to a compelling resolution that creates intriguing options for the realm of Darkness. Definitely one of the high points of the book from an unexpected quarter.

In the second half we are swept towards Kolanse from a variety of directions as the various threads hit their marks, before plunging into the maelstrom (no pun intended) at the heart of the story. Perhaps most surprising about this plunge though is the inevitability of the conclusion. To a long time reader there are no real surprises and disappointingly the enemy at the end is not half as terrifying as we'd been led to believe. Nor are they the ones we originally signed up to fight.

I reviewed the most recent (as of this blog post) novel from an author I’d been wanting to sample for a while, Tim Lebbon. Mark at SFFWorld is a big fan of Tim’s work so I had some expectations, which were mostly met. Anyway, here’s the review of Echo City: 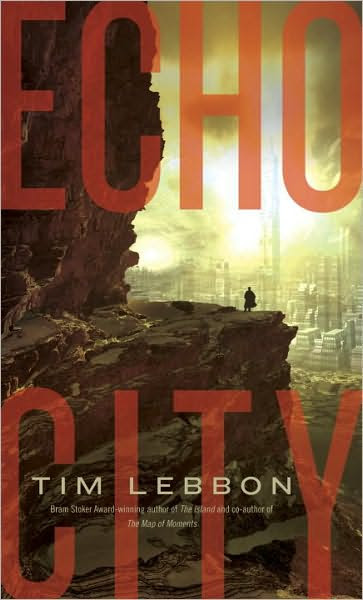 Echo City itself is a living character. Its highest peaks soar to the upper reaches of the sky; the depths of its sewers delve deeply into the earth, as its many levels are built upon each other. There are Bellowers, large mouths that transport people through the depths of Echo City. At this point, I can draw some comparison. Perhaps because Miyazaki’s Spirited Away was being shown on television shortly after I finished the book, I was able to see some similarities – the strange creatures, the class structure, and the potential sinister nature of the city. Echo City also has shades of Mieville’s New Crobuzon, as well as the dark horrific city of Jeff VanderMeer’s Veniss Underground. As previously mentioned, Lebbon owes a debt to Mary Shelley for his Bakers, who seem to be spiritual successors to her most famous Doctor.
…
The plot is fairly linear, but the pull of the narrative, when it veers from the fascinating descriptions of the weird, fantastical creepiness of Echo City, did not grip as strongly. The most interesting plot point is the mystery surrounding Rufus’s origin, as well as the plot thread involving Rufus’s disappearance in Echo City.