State of Decay by Knapp and assorted thoughts

Only one new review this week, a debut novel from 2010. I’m still playing catch-up with a lot of the 2010 releases. James Knapp’s State of Decay, a zombie/near future/thriller/mystery hybrid: 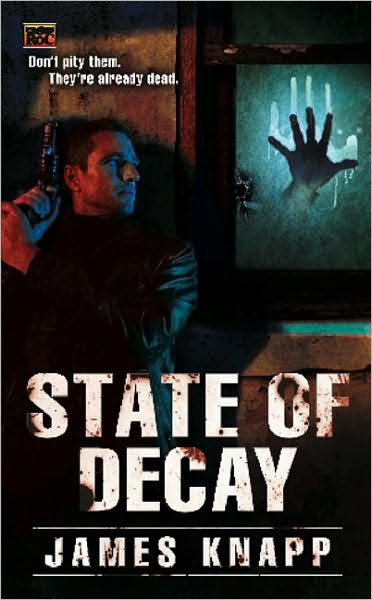 I can’t help but give credit to Knapp for what he’s trying to do here. In the current state of the genre, Zombies can be considered the new vampires, they inhabit some of the more popular video game franchises, some of the most popular comic books, popular movies, and thanks to the recent adaptation of The Walking Dead TV screens. Knapp is hitting upon a hot trope and seems to be having fun with it. He’s playing with that trope in interesting ways, though he isn’t exactly the first to show zombies being used as a form of slavery. His zombies, as I previously indicated, retain a portion of themselves. This is where the comparison to Blade Runner comes into play as one of the questions posed by the narrative and the characters is whether or not these reanimated corpses are humans and whether or not they have rights. It’s an interesting question to pose – just where does humanity end and death begin?

Also on the reading front, as my sidebar currently indicates, I’m in the midst of two books I’m really enjoying. The Age of Odin by James Lovegrove, which is a military sf set in the very near future with a woman president and a world where the Æsir, the Norse Gods, are looking to make their presence known in the world once again. Liviu at Fantasy Book Critic enjoyed the first two (Age of Ra and The Age of Zeus) in this connected trilogy and this one is a ton of fun, so I’ll probably go back and read the earlier installments.

The other book is of course, The Name of the Wind. This is my second reading of the book and I love it. I’d forgotten how inviting Rothfuss’s prose is and just how powerful his narrative pull is.
at 2/16/2011