You all know the drill by now...this is my Sunday post which contains the list of books I received for review the previous week. 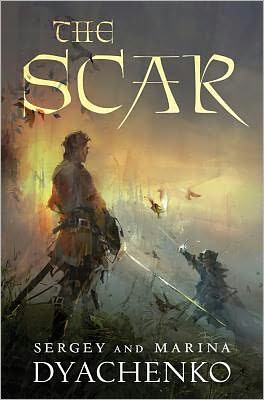 The Scar by Sergey Dyachenko and Marina Dyachenko (Tor Hardcover 02/28/2012) – In a seeming trend, another popular and acclaimed Russian fantasy novel is translated and published here in the US.

Reaching far beyond sword and sorcery, The Scar is a story of two people torn by disaster, their descent into despair, and their reemergence through love and courage. Sergey and Marina Dyachenko mix dramatic scenes with romance, action and wit, in a style both direct and lyrical. Written with a sure artistic hand, The Scar is the story of a man driven by his own feverish demons to find redemption and the woman who just might save him.

Egert is a brash, confident member of the elite guards and an egotistical philanderer. But after he kills an innocent student in a duel, a mysterious man known as “The Wanderer” challenges Egert and slashes his face with his sword, leaving Egert with a scar that comes to symbolize his cowardice. Unable to end his suffering by his own hand, Egert embarks on an odyssey to undo the curse and the horrible damage he has caused, which can only be repaired by a painful journey down a long and harrowing path.

Plotted with the sureness of Robin Hobb and colored with the haunting and ominous imagination of Michael Moorcock, The Scar tells a story that cannot be forgotten. 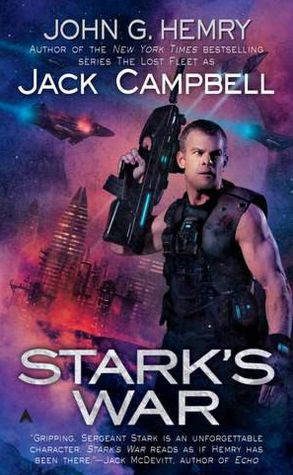 Stark’s War (Stark’s War #1) by John G. Hemry (Ace Hardcover 07/26/2011) – This is the first in a trilogy Hemry wrote before he exploded with the Jack Campbell pen name. Short Military SF Thrillers (it seems) that look like fun and star Dominic Monaghan as the hero. With the success and popularity of Hemry/Campbell’s Lost Fleet series, Ace is smartly reissuing these books. Mark from SFFWorld liked the first one when it hit UK bookshelves last year.

The United States of America reigns over Earth as the last surviving superpower. To build a society free of American influence, foreign countries have inhabited the moon, taking advantage of the natural resources to earn their own riches. Now the U.S. military has been ordered to wrest control of Earth's satellite from their rivals. Sergeant Ethan Stark must train his squadron to fight in an airless atmosphere at one-sixth normal gravity against a desperate enemy. Ensuring his team's survival means choosing between which orders to obey—and which to ignore. 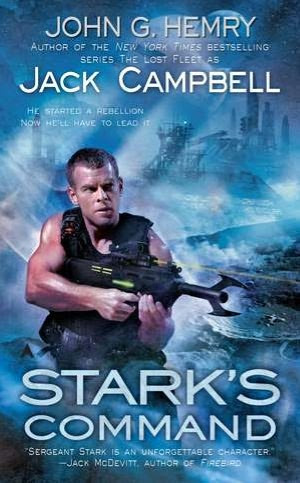 Stark’s Command (Stark’s War #2) by John G. Hemry (Ace Hardcover 11/26/2011) – This is the second in a trilogy Hemry wrote before he exploded with the Jack Campbell pen name. Short Military SF Thrillers (it seems) that look like fun and star Dominic Monaghan as the hero. With the success and popularity of Hemry/Campbell’s Lost Fleet series, Ace is smartly reissuing these books. Mark from SFFWorld liked the first one when it hit UK bookshelves last year.

The United States military forces on the moon have overthrown their high-ranking officers and placed Sergeant Ethan Stark in command. Instead of just issuing orders, Stark confides in his fellow sergeants in hopes of forging an army based on mutual respect. Now, in addition to fighting a merciless enemy on the moon's surface, Stark must contend with the U.S. government's reaction to his mutiny . . . .

The moon's American civilian colony has offered to assist the military with food and supplies on one condition: that Stark's troops back the colony's plea for independence. In order to survive, civilian and soldier must learn to trust each other as one man's cause becomes a crusade . . . 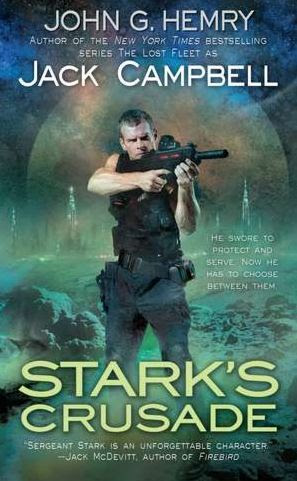 Stark’s Crusade (Stark’s War #2) by John G. Hemry (Ace Hardcover 11/26/2011) – This is the third and final in a trilogy Hemry wrote before he exploded with the Jack Campbell pen name. Short Military SF Thrillers (it seems) that look like fun and star Dominic Monaghan as the hero. With the success and popularity of Hemry/Campbell’s Lost Fleet series, Ace is smartly reissuing these books. Mark from SFFWorld liked the first one when it hit UK bookshelves last year.


When the American Lunar colony was threatened, he served his country in battle. But when high ranking officers betrayed him and his soldiers, he had only one choice—rebellion. Now Sergeant Ethan Stark is in charge of a rebel organization he never intended to create, and the United States has just joined forces with its former enemy to insure his destruction.

Stark has no intention of compromising his honor, even in the face of impossible odds. He and his soldiers have no desire to fight American forces, but they are willing to pay any price to defend the rights of the colonists they were sent to protect. Now Stark and his soldiers must fend off deadly aggression from their own country without igniting a full scale civil war. 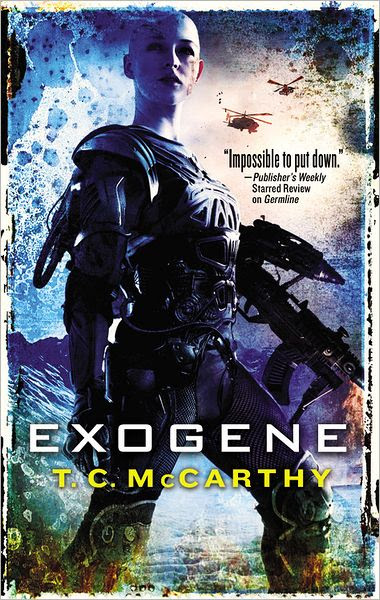 Exogene (The Subterrene War #2) by T. C. McCarthy (Orbit, Mass Market Paperback 03/01/2012) – McCarthy’s debut and the first in this series, Germline was very impressive, and one of the best debuts I read last year.


Exogene (n.): factor or agent (as a disease-producing organism) from outside the organism or system. Also: classified Russian program to merge proto-humanoids with powered armor systems (slang).

Catherine is a soldier. Fast, strong, lethal, she is the ultimate in military technology. She's a monster in the body of an eighteen year old girl. Bred by scientists, grown in vats, indoctrinated by the government, she and her sisters will win this war, no matter the cost.

And the costs are high. Their life span is short; as they age they become unstable and they undergo a process called the spoiling. On their eighteenth birthday they are discharged. Lined up and shot like cattle.

But the truth is, Catherine and her sisters may not be strictly human, but they're not animals. They can twist their genomes and indoctrinate them to follow the principles of Faith and Death, but they can't shut off the part of them that wants more than war. Catherine may have only known death, but she dreams of life and she will get it at any cost.

Crucible of Gold (Temeraire #8) by Naomi Novik (Del Rey, Hardcover 03/06/2012) – This is the seventh book of in Novik’s popular Dragons-in-Napoleonic-War series. I read the first three when they first hit shelves a few years ago (His Majesty's Dragon, Throne of Jade, Black Powder War) and enjoyed them and Novik’s been trucking along swimmingly since.

Naomi Novik’s beloved series returns, with Capt. Will Laurence and his fighting dragon Temeraire once again taking to the air against the broadsides of Napoleon’s forces and the friendly—and sometimes not-so-friendly—fire of British soldiers and politicians who continue to suspect them of divided loyalties, if not outright treason.

For Laurence and Temeraire, put out to pasture in Australia, it seems their part in the war has come to an end just when they are needed most. Newly allied with the powerful African empire of the Tswana, the French have occupied Spain and brought revolution and bloodshed to Brazil, threatening Britain’s last desperate hope to defeat Napoleon.

So the British government dispatches Arthur Hammond from China to enlist Laurence and Temeraire to negotiate a peace with the angry Tswana, who have besieged the Portuguese royal family in Rio—and as bait, Hammond bears an offer to reinstate Laurence to his former rank and seniority as a captain in the Aerial Corps. Temeraire is delighted by this sudden reversal of fortune, but Laurence is by no means sanguine, knowing from experience that personal honor and duty to one’s country do not always run on parallel tracks.

Laurence and Temeraire—joined by the egotistical fire-breather Iskierka and the still-growing Kulingile, who has already surpassed Temeraire in size—embark for Brazil, only to meet with a string of unmitigated disasters that leave the dragons and their human friends forced to make an unexpected landing in the hostile territory of the Inca empire, where they face new unanticipated dangers.

Now with the success of the mission balanced on a razor’s edge, and failure looking more likely by the minute, the unexpected arrival of an old enemy will tip the scales toward ruin. Yet even in the midst of disaster, opportunity may lurk—for one bold enough to grasp it. 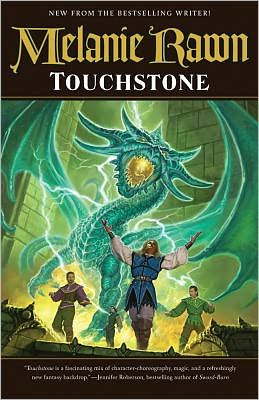 Touchstone (Glass Thorns #1) by Melanie Rawn (Tor Hardcover 02/28/2012) – Rawn gained a pretty strong following in the late 1980s and early 1990s with her Dragon Prince and Dragon Star sagas. This is the first of a new trilogy, so could be good place for (somebody like me) who hasn’t read her work before.

Cayden Silversun is part Elven, part Fae, part human Wizard—and all rebel. His aristocratic mother would have him follow his father to the Royal Court, to make a high society living off the scraps of kings. But Cade lives and breathes for the theater, and he’s good—very, very good. With his company, he’ll enter the highest reaches of society and power, as an honored artist—or die trying. Cade combines the talents of Merlin, Shakespeare, and John Lennon: a wholly charming character in a remarkably original fantasy world created by a mistress of the art.

Although Touchstone can stand alone, it is the first book of a brilliant, utterly engaging new fantasy series from the author of the bestselling Dragon Prince series. 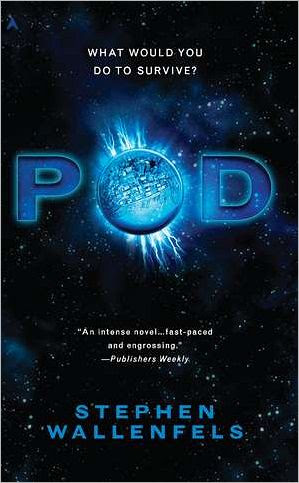 POD by Stephen Wallenfels (Ace Mass Market Paperback 04/24/2012) – This is an alien invasion story, and quite frankly, we haven’t had quite as many of them lately. From the little I gathered on the intarwebs, it looks like Mr. Wallenfels published an earlier version of this novel with a small press. .

Surviving a massive alien siege is one thing-­surviving humanity is another.

I'm all cried out. I'm still alone. The sky is full of giant spinning black balls that kill anyone stupid enough to go outside. I've only been out of the car twice-once to pee and once to look at the sky. That one look was enough for me. Now I sit alone in the car, staring out the window like a rat in a cage. But I don't have anyone to look at. The parking garage is empty, except for twisted-up cars, broken glass, and the smell of leaking gasoline.

POD is the story of a global cataclysmic event, told from the viewpoints of Megs, a twelve-year-old streetwise girl trapped in a hotel parking garage in Los Angeles; and sixteen-year-old Josh, who is stuck in a house in Prosser, Washington, with his increasingly obsessive-compulsive father. Food and water and time are running out. Will Megs survive long enough to find her mother? Will Josh and his father survive each other?