This is the Tuesday post where I link to the reviews Mark and I have posted to SFFWorld over the past week. Well, at least one of us usually posts a review per week and Tuesday has become the day when I do the whole cover, review snippet, and and link to said review.

Tobias Buckell ’s, Arctic Rising is his first novel, not set in a franchise, in a couple of years. I thoroughly enjoyed his Xenowealth novels but this one is a slight change of pace – an eco-thriller with SFnal touches. Below is the typical cover shot followed review excerpt:

Buckell starts the action early with the aforementioned ship conflict, causing Anika to crash and her partner to eventually die. From there, she’s chased, nearly run off the road and killed, taken in by her potential lover Violet and meets the spy Roo. The characterization is, as that sentence suggests, not your typical one. Violet (aka Vy) is perhaps the most infamous drug dealer on Baffin Island, where much of the early portion of the novel takes place. There’s also an unusual international variety amongst the main characters. Anika is of mixed Nigerian background, whilst Vy has a Russian bodyguard, and Roo is of Caribbean origin. I wouldn’t be surprised if Roo is somehow related to Buckell’s character Pepper (from his Xenowealth saga), if not by blood, then he’s at least a spiritual cousin of sorts.…The Arctic landscape provides for an interesting cross-section of the world, many individuals and cultures on the fringes have gravitated to the Arctic, which is in many ways, a new melting pot of a society trying to find an identity. Many people are willing to take advantage of a land where the law is fairly loose. As Anika becomes more entrenched in the geopolitical intrigue, she finds herself questioning her personal limits. This began with killing in self-defense and leads to even darker questions where the answers she seeks might leave the fate of not just the Arctic region, but possibly the world hanging in the balance.

Mark has a review of a debut, Chris Holm’s, Dead Harvest: 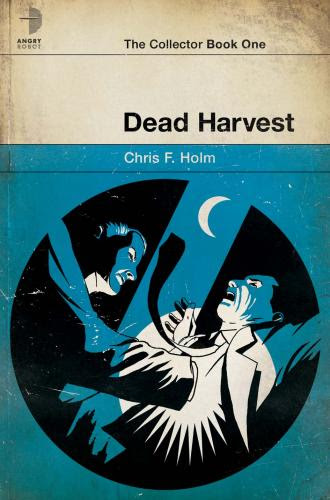 It would be easy to summarise the book as ‘detective thriller meets the supernatural’ but it is a pretty glib summary. There’s more going on here than you might think. Sam is an interesting character himself in that he’s not particularly pleasant, at least to begin with, in a manner that’s rather more Charlie Houston’s Joe Pitt than Jim Butcher’s Harry Dresden. Sam holds grudges and isn’t going to let this one go.…The book starts fast and keeps the pace up throughout. We go from the original incident to wider issues as it seems the episode is being used to escalate a War between the Angels and the Collectors. We meet the commanders of each side who are unwilling to believe Sam’s opinion. There’s a lot of running and hiding with Sam and Kate finding some unexpected allies, as well as meeting formidable foes. There’s a lot of collateral damage in the city, with police cars damaged, explosions at a hospital, an underground train wrecked, and a helicopter crash along the way as the police try to catch Sam and Kate and the Angels and the Collectors try to find them. The ending’s a big showdown, with a big revelation that connects Sam in ways previously unconsidered, and with a nod to events on a larger playing field that will no doubt be covered in later books.