Throne of the Crescent Moon & Dangerous Visions at SFFWorld

Yes, today is Wednesday, so a slight slippage in the weekly SFFWorld review shout-out’s here at the o’ Stuff. Unchanged are the authors of the book reviews, Mark and me. I’ve got a hot new writer who has received award nominations for his shorts and bursts onto the scene with his spectacular debut while Mark looks at one of the most important and praised anthologies in SF history.

Two months of 2012 in the books, and we already have two supremely impressive debut novels in the books. The one I write of today is Saladin Ahmed’s, Throne of the Crescent Moon which is his take on sword and sorcery, with slight dashes of epic fantasy. Whatever the ingredients, the resultant stew is wondrous. Below is the typical cover shot review excerpt:

A fat old wizard/demon hunter as the hero and central figure of the story, the swordsman as the more mature, but younger sidekick, and the setting a desert empire that resembles a Middle East and Egypt of myth. Not exactly the most typical ingredients for sword & sorcery novel, but the elements are somewhat familiar and the framework of the story – an impeding doom with an oppressive government – is recognizable. One can’t just add new ingredients to a new formula and expect it to magically work. Technique is required, and in this case, Saladin Ahmed breathes vitality and life into the sword and sorcery sub genre with Throne of the Crescent Moon, his debut novel and the first of the Crescent Moon Kingdoms saga.
…
The threat of the ghuls is more than just random occurrence. The monsters encountered by Adoulla and his partner are larger and more powerful than any he’s encountered in the past. This leads the good doctor to surmise that a larger threat is present and creating these larger, more monstrous ghuls. When Adoulla and Raseed first encounter the Falcon Prince, Adoulla hesitantly allows for the thief’s safe passage and misleads his pursuers, strking up a somewhat early, if tenuous alliance with the vigilante. Adoulla is admonished by his pious, and young apprentice about breaking the lay and being an accomplice. Makhslood shakes him off a bit since the Doctor shares many with the Falcon Prince, specifically the increasingly strong and oppressive hold the Khalif has on the city. 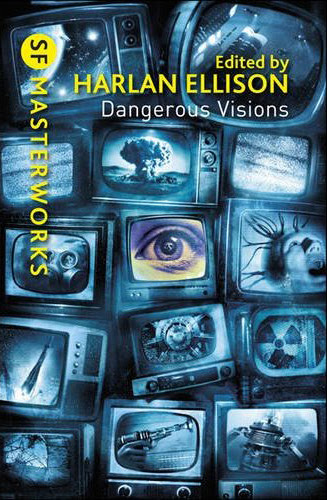 In SF circles, Dangerous Visions is one of those that many know of by reputation but have rarely actually read. It was the Gone with the Wind of SF anthologies when it was first published in 1967. Like the film Gone with the Wind before its release, there was great speculation in the genre about Dangerous Visions before the book was published. Heralded as the best of cutting edge New Wave SF at the time, the rumours of what Harlan was doing and which authors were included, and perhaps more importantly which ones were not, were rife. Its content was allegedly salacious, sexy, outrageous, exciting, and thought-provoking, at a time when SF was maturing into something beyond the space opera pulp of the 1940’s and 50’s.…The eventual list of 33 stories from 32 authors reads like a Who’s Who of SF writers: Philip K Dick, Samuel ‘Chip’ Delany, Robert Bloch, Philip José Farmer, Robert Silverberg, Brian Aldiss, Theodore Sturgeon, JG Ballard, John Brunner, Norman Spinrad, Fritz Lieber, Frederik Pohl, Lester del Rey, Roger Zelazny, and even Isaac Asimov, who amusingly explains in one of his Introductions why he’s not in the collection, other than for the Introduction. Ellison cherry-picked who he saw as the best in the US at the time and the emerging British New Wave at the time.Jo Walton claims that it is ‘an astonishing anthology’. Harlan himself, with no lack of modesty, declares at the beginning of the collection, “What you hold in your hands is more than a book. If we are lucky it is a revolution.” (page xxxii)